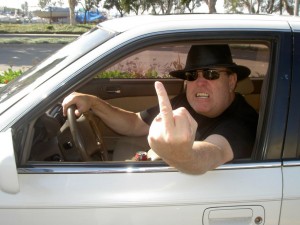 Not the dude in this story.

Last night, at about 7pm (still daylight), I was taking my son to “stick and puck” at the hockey rink.  I live in a semi-rural area.  I  was going down a road that “Ts” into another road (3-way intersection with a 1-way stop.  Image below).   Both are two-lane roads.  A dude in a Mercedes AMG with darkly-tinted windows is in front of me and arrives at the stop sign.  We’re both signaling to turn right, which is how the traffic always goes at this intersection.  He stops… but, he’s not going.  I look to the left to see if he was waiting for oncoming traffic.  Nope.  There was no traffic AT ALL coming from the left.  The road is clear.  I wait for a moment… and another moment.  He’s still not going.  I suspect he’s probably on his phone, like SO many drivers around here.  There is enough space between us that I could go around him.  So, I do just that.  I swing out to the left side of his car and proceed to make the right turn around his stationary car.  (see illustration below)

He apparently takes GREAT exception to this and pulls out to the right simultaneously (and hits the throttle hard).  He’s NOT going to let me get around him.  OK, no problem.  I’m not going to race, and my Camry isn’t going to get ahead of an AMG Mercedes.   😉   I back off to drop in behind him, and he brake checks me.  Then he continues swerving and rolls down his window.  Through the open window, he starts waving his arm, “inviting” me to pull over.  He pulls his car half-way onto the shoulder (still continuing forward) and sticks his head out (looking back at me).  He appears to be in his 30s.  I can read his lips – “Come on! Let’s go!”  He’s waving his arm signaling me to pull over (challenging me to fight, I presume).  Yeah… no, thanks. 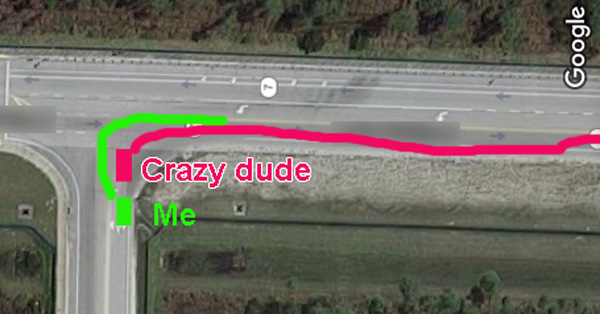 Meanwhile, I stay my course.  I’m certainly not pulling over to pow-wow, so to speak, with this nutjob, and I’m keeping a safe distance behind him.  Mind you, from the beginning of the encounter to this point, I have not honked my horn.  I have not gestured.  I have not said anything nor mouthed any words.  I’m completely stone-faced.  Both hands are on the wheel.  And, I’m keeping my distance.

Finally, he relents and gets back into the lane and drives on normally.  I continue behind at a safe distance.  This road is several miles long before the next intersection.  We arrive at the next intersection about 5 minutes later, which intersects a major boulevard with 4-way traffic lights.  We both are turning left.  There are two turn lanes.  The light is red.  He takes the inside lane.  I take the outside turn lane.  I don’t pull in behind him only to be possibly trapped.  As we roll up, the cars in front of us are such that we’ll be right next to each other.  Instead, I stay back by a half-car length so that I’ve got some space in front of me to pull out to the right, if I need to (provided I wasn’t blocked in… and I wasn’t, yet).  Also, we won’t be in direct sight of each other.  I tell my son to be ready to dial 911, if he gets out of his car.

Fortunately, it seemed the dude cooled his jets.  He didn’t get out of his car.  He didn’t roll down the passenger side window (windows were very darkly-tinted).  He did not attempt to re-engage.  And, of course, neither did I.  The light turns green and we are both on our way. 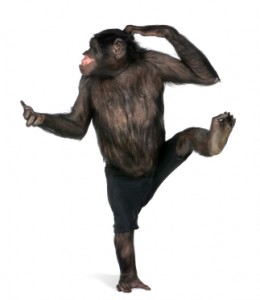 I read a book some time ago: Facing Violence: Preparing for the Unexpected – by Rory Miller.  In it, the author describes the “monkey dance.”  I’ve written about the “monkey dance” before.  This dude was doing the “monkey dance” in his car and with his car.  The best way to avoid a physical confrontation or fight is to not engage in the “monkey dance.”  Like I said… I never honked.  I never gestured.  I never yelled.  This guy went NUTS simply because I dared to go around him in his stationary car.  I mean he was off-the-charts mad… Disproportionately so for the situation (there was no situation).  And, I did not respond in kind.  In fact, I didn’t respond AT ALL.

The best way to win a fight is to not be in it.  This was also a good lesson and example for my 15 year old son.  I told my son, “Some day, that guy is going to run into someone who is crazier than him, and it won’t end well.”

Editing to add:  I was reminded of this “Parking Lot Rage” incident many years back.

Stay calm and drive on.

The vast majority of those who are licensed to carry concealed will tell you that being armed has a CALMING effect.  It doesn’t embolden them.  Perhaps, counter-intuitively, being armed imbues them with a strong desire to avoid violent confrontations… for they know the risks of escalation.  DE-escalation is not only the best route, it’s almost always quite EASY.  Simply, don’t take the bait.  Don’t respond “in kind.”  Don’t be righteously indignant.

Stay calm.  Smile to yourself.  Stay off your phone while driving.  Eyes on the road.  Head on a swivel.  Stay safe.

2 Responses to Avoid the “Monkey Dance” with Road Ragers