Surviving is a Science

With today’s bad news coming at the speed of internet, we hear a lot more about tragic accidents, acts of violence, and natural disasters.  While it may seem that these incidents are increasing in frequency (due to increased media coverage), the reality is that we are at all-time lows for violent crime.  And, air travel IS safer than the drive to the airport.

It won’t happen to me.

So, while the chance of you being struck by “lightning,” so to speak, is quite low… it DOES happen… to nice people in nice places.  The best way to beat the “odds” is to be situationally aware. Where are the emergency exits?  Could you find them with your eyes closed (in total darkness)?  Which one is closest?  What if you can’t go that way?  How many rows to each exit?  I do the same thing in restaurants, movie theaters, etc.

It’s NOT part of the show! 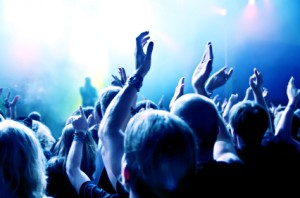 The majority of people that died at the Great White concert fire  at The Station bar in Rhode Island tried to get out the same way they came in.  And a majority of them died in the ensuing logjam (see diagram below).  But, before they did that, most of them WATCHED the flames spread… thinking it was part of the show.

Don’t watch!  MOVE!  And, don’t necessarily move the same direction as everyone else.  Where is the nearest exit?  Can you MAKE an exit (chair thrown through a glass window)? 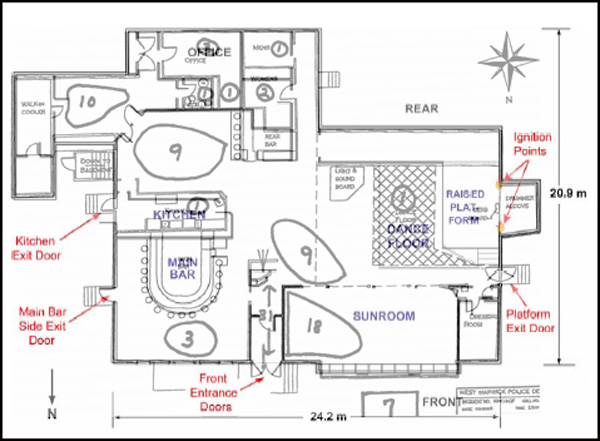 I’ve superimposed two floor plans of the bar. One has the exits marked. The other indicates where the bodies were found (circled numbers).  Thirty-one at the front door!

Notice the kitchen door.  There’s always an exit from the kitchen.  Another door was by the bar.  The platform door was reportedly initially blocked by a “bouncer” who insisted it was for band members only.  I would have flattened that bouncer on the way out.  There were FOUR exits available.  Maybe the exits weren’t clearly marked.  It doesn’t matter.  Consider doing a “walk-through” to make a mental note of where the exits are when going into a crowded and confined event.  There were many windows.  Some were eventually used for escape.  If you’re near a window, consider it a PRIMARY option for escape and BREAK IT!

It’s never part of the show!

A similar thing happened at the Aurora movie theater shooting.  Most people didn’t move at all initially, thinking the crazy motherfucker firing a gun was “part of the show.”  That was a big mistake.  Don’t worry about looking “stupid,” if you bolt out of there, and it turns out to be a “false alarm.”  MOVE!!  GTFO!  (Get the fuck out!)  Or DUCK!  But, don’t stand there.  Don’t “prairie dog” and make yourself an easy target.  I’d rather be embarrassed and alive than “cool” and dead.

It’s amazing how often interviewed bystanders say, “I thought it was fireworks.”  It’s NEVER fireworks… unless your at a Fourth of July FIREWORKS SHOW.  In a restaurant, there’s usually an emergency exit near the bathrooms.  And, guess where another EASY way out of a restaurant is?  Through the kitchen!  There’s ALWAYS a door from the kitchen to the outside.  Always.  (See the floor layout of The Station bar above.) 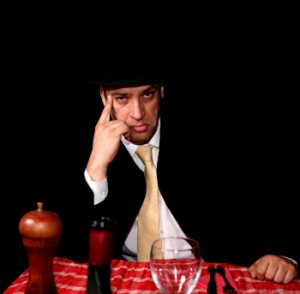 I try to sit facing the front door of restaurants.  If two-legged trouble comes to visit, it will likely come through the front door.  If I ever see some “enterprising youths” come in and “shit is going down,” I am going to GTFO (with my family in tow). My first thought as an escape route is through the kitchen.  As I said, there’s always a back door in the kitchen, and it’s in the opposite direction of where the “action” is.  I’m not sticking around for “the show.”  I’m not sticking around to see if it’s “for real.”  And, I will NOT obey orders to “not move.”  In fact, you might condition yourself to consider the order, “Nobody move!” as a TRIGGER to GTFO… RFN (right fucking now).

That doesn’t mean I don’t enjoy my meal and conversation.  So spare me the “paranoid” comments.  Situationally aware doesn’t equate to paranoia.  It just means not being oblivious.  It’s no different than wearing a seat belt in your car.  You’re not “paranoid” about crashing, are you? 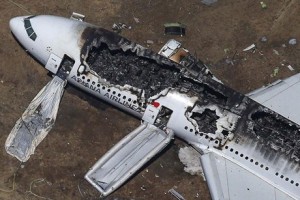 Recently, there was a crash-landing by an Asiana Boeing 777 at San Fransisco.  Almost everyone got out alive.  There have been other similar crashes (Miracle on the Hudson) where everyone or nearly everyone survived.  The KEY to survival is almost always getting OUT of the aircraft QUICKLY.  In cases with many casualties, they can often be attributed to a failure to escape, not the crash impact itself. 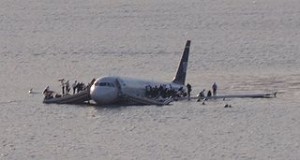 When you take your seat on a airplane, do you make a note of where the nearest exit is?  What about another exit in the OTHER direction?  How many rows away are they?  Could you count the rows (with your hand on the seat-backs) in total darkness or in dense smoke?  Leave your carry-ons behind and GTFO!  Don’t wait for anyone to give the order, either.  Just GO!

It happened to me… 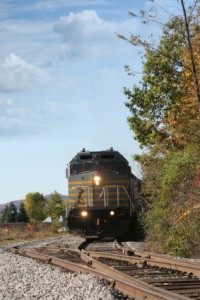 I’ve been in two life-or-death situations.  And, quick action is what saved my ass.  The first was when I ran out of air scuba diving at 80 feet.  In that one, I was CERTAIN I was going to die.  The second situation was in my car with my wife, blocked in on a railroad tracks with a train coming.  No shit (more on that below).  In both situations, I had multiple options.  And, we could debate which option would have been “best.”  But, what literally saved my life both times was doing SOMETHING… RIGHT AWAY.

In almost every life-threatening situation, the answer is MOVE.  Whether the threat is another person, fire, inanimate object coming at you (like a rock, car or train), or force of nature….  MOVE.  Speed is life.

Survival is a science

The difference between surviving and not surviving is ACTION.  Immediate action.  Those who are prone to the deer-in-the-headlights syndrome are the ones that die.  I’m not kidding when I say it’s a science.  I’ve read four full books (list below) on the subject so far.  Criminal behavior is predictable, for example!  Very interesting stuff.  You can see it coming… if you’re watching.

Listen to the voice in your head…. the hairs on your neck standing up…  GTFO and live. Stick around for “the show” and you die.

There is an term called the “OODA loop.”   It was originally a concept developed for combat operations.  It’s a decision making process under pressure that can apply to nearly any situation.   OODA = Observe.  Orient.  Decide.  Act.  Rinse and repeat as necessary.

That wasn’t fiction.  That actually happened to my wife and me… with the Orient and Decide stages happening in a fraction of a second.

From a practical standpoint, there’s not really any way most of us can “train” for these situations.  You can’t really rehearse them, except in your head.  But, rehearsing them in your head IS a way to “practice.”  “What would I do if….”  A little forethought can go a long way, maybe even save your life.

Damned if you don’t.

The best strategy of all… to survive a crisis… is to not be there in the first place.  Avoidance.  Don’t do stupid things in stupid places with stupid people at stupid times.  And, if something just doesn’t seem right (or safe)… LEAVE.

If confronted by a criminal or otherwise combative threat, try to LEAVE.  Move… quickly!  They won’t expect that.  If that isn’t possible, deescalation may be your next step.  But, if you must defend yourself, do it with unbridled speed, power, and ferocity.  Freezing may get you hurt or worse.

And, if you want to dance, then you’re no friend of mine…

(Hat tip to Men Without Hats) 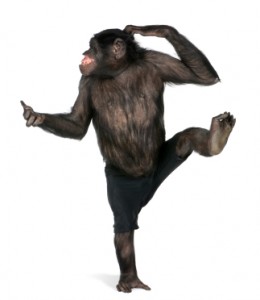 If you’ve never done it, you’ve surely seen it… The Monkey Dance.  The Monkey Dance is usually two guys (but it could be a group vs one guy) face off over some dispute.  The verbal taunts escalate.  Then one guy touches another guy… could be a poke or a shove.  Then one touches the other’s face… and then “fight’s on!”

As they say, “discretion is the better part of valor.”  Walk away.  Refuse to participate in the escalation, puffery, and saber-rattling.  This is certainly easier for older men.  Young men… not so much.

Let it go.  Apologize for whatever the perceived slight was (“What are you looking at??”)  Walk away!

The Unthinkable:  Who Survives When Disaster Strikes and Why – Amanda Ripley.

The Survivors Club:  The Secrets and Science that Could Save Your Life – Ben Sherwood.

Facing Violence:  Preparing for the Unexpected – by Rory Miller

The Gift of Fear – by Gavin DeBecker

The recurring theme in these books was that those who survived were those who TOOK ACTION immediately.  Action beats reaction.  Agonizing over doing the “right thing” can be deadly.  Worrying about what others will think can be deadly.

Be safe.  Think ahead, Dental Warriors.

Disclaimer:  I am not a lawyer.  I am not an expert on or about anything.  Do your own research.  Educate yourself.  Go about your life at your own risk.  All the above is my opinion only.

9 Responses to Surviving is a Science