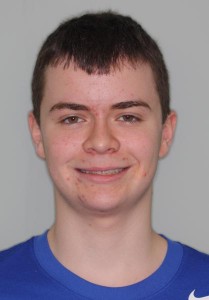 My son is now fourteen years old, almost fifteen, and in ninth grade.  Back in fourth grade, his class was doing a “square dance.”  My son fell down, face-down on the floor.  Another kid fell on top of his head, smashing his teeth into the floor.  He was in braces at the time, and his two central incisors were significantly intruded.  He was rushed to the pediatric dentist, who happened to be across the street from his school.  She repositioned the teeth and the orthodontist (next door) fixated them using the brackets still attached.  I was upset, and my wife wondered why.  I knew what was to come.

Endodontic treatment was later done on one of the central incisors.  Not long after that, we noticed external root resorption occurring in the cervical region.  My endodontist conferred with a respected professor where he did his residency.  The conclusion was that nothing could be done about the resorption, and that we’d likely lose the teeth at some point.  I hoped we’d have some time… a lot of time.

Over time, it was also apparent that the teeth had ankylosed.  As the rest of him grew, the central incisors did not go with the rest of the crowd.  For cosmetic reasons, I did some bonding to lengthen the centrals. 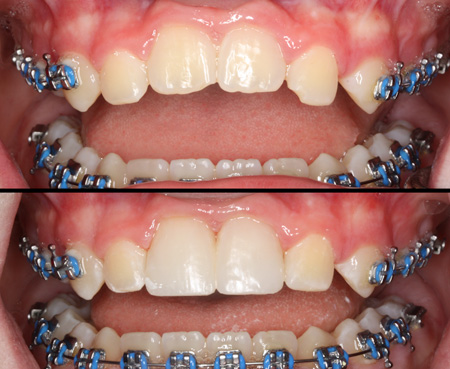 Ankylosed centrals resulted in a reverse smile line. Corrected with composite bonding.  This was 2 years ago.

Time.. ticking away with my sanity, hard to believe such a calamity

Time’s up!  We got almost five years.  My son came to me late Saturday night, “I was biting into a cheese stick and my tooth broke.”  The entire crown of tooth #8 (the one that was RCT’ed) was mobile and still attached at the gingiva.  I broke into a cold sweat.  I knew it was coming, and it still REALLY bothered me.  I knew this would not be an easy case.  My beautiful son, with beautiful teeth… losing his FRONT teeth.  And, most of you know that replacing them is no easy task.   He’s too young for implants.  And, doing a conventional bridge is rather invasive to the adjacent teeth.  Flippers just suck.  People have said, “He’s lucky his dad is a dentist.”  I don’t feel so lucky.  I know too much.

I got him into the office today (Easter Sunday), and my wonderful assistant met us there.

They didn’t teach us this in dental school!

I honestly had no idea what I was going to do.  I made it up as I went along.

My first thought was to extract the coronal portion of the tooth, fill in the defects and bond it as a “pontic” to the adjacent teeth as an ersatz “Maryland Bridge.”  Later I’d have my periodontist extract the root and place a bone graft. 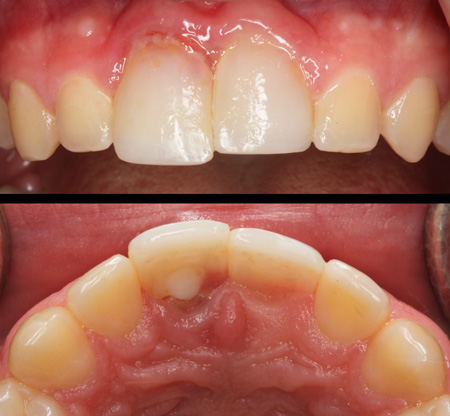 Pre-op. #9 is extruded and “waving in the breeze.”

I anesthetized the area and placed an Optragate for better visualization and access.  In the process of inserting the Optragate, the tooth fell out. 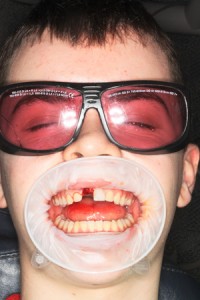 Optragate in place. If you’re not using these, you’ve GOT to try them! Makes access and retraction so easy!

In the area of resorption, there was a big blob of hyperplastic, red, bleeding tissue which was obscuring the remaining root from view.  I used a combination of a Picasso Lite diode laser and currette to clean up the hyperplastic tissue.

On the right, you can see the composite core placed in the endo access years previously.

Once I rinsed off the exfoliated dental crown and the residual root, I noticed that the resorbed areas were quite clean.  It is nothing like decay.  It looked like “Pac-man” ate away the dentin, leaving it clean and HARD.  It’s not soft like decay, and it’s not discolored. 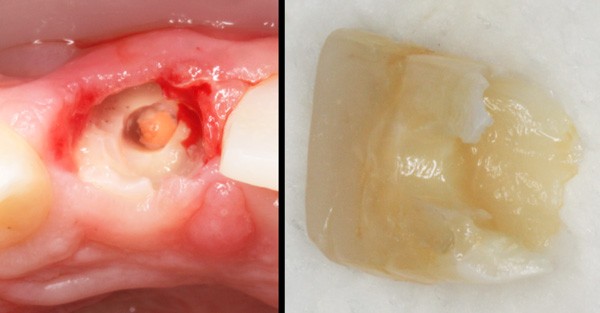 Hyperplastic tissue removed on left.  At this point, I had removed (from the crown) the old composite that had filled the endo access.

Then I had an idea.  What if I placed a post in the remaining root and bonded the crown to that?  Hmmmm… How would I fill in the missing areas with composite without having a bunch of excess being expressed into the tissues, not being able to trim the excess and polish it?  Wait a sec… I have another idea.

I had a model of my son’s teeth from about a year ago in the lab (from making a sports guard).  I used my Mini-Star pressure former (Great Lakes Orthodontics) to create a Copyplast matrix (clear and more rigid than bleach material).  I’d use this to position the crown properly in the arch. 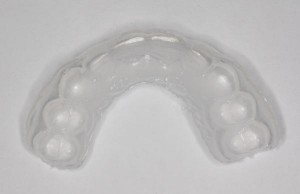 I fitted a 3M Rely-X Fiber Post 3D into the canal and placed it WITHOUT bonding it.  I then etched and bonded the tooth and placed it in the Copyplast matrix.  Then I put a dab of Filtek Supreme Ultra in the crown, with the idea of picking up the post.  I seated the matrix intraorally and visually confirmed that the composite came in contact with the post.  Then I used my Ultradent Valo curing light to polymerize the composite through the matrix.  I removed the matrix and then the crown of the tooth.  Voila!  The post came out attached to the crown as planned. 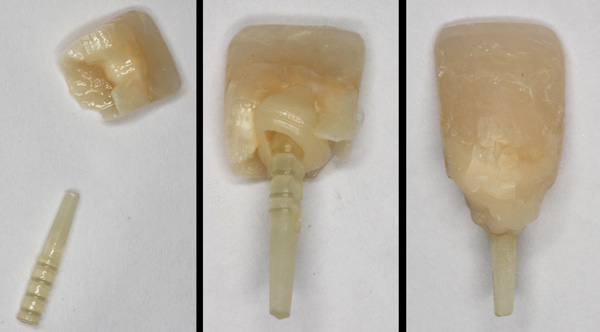 Next, I got some hot water in a bowl to heat up some Filtek composite.  I applied warmed and soft composite to the crown / post and re-seated it in the remaining root, allowing the surrounding tissues to shape the composite.  I removed the “restoration” and cured the composite.  “Rinse and repeat” with additional increments of composite to fill in the blanks.  Then I trimmed and polished the “composite root” structure I had created.  I re-seated it in the root to confirm fit.

The idea was to fill in the blanks and trim and polish, as much as I could (extraorally) BEFORE bonding it to the root.  I didn’t want a bunch of uncontrolled composite extruding into the supporting tissues.

Don’t drill me.  I’m only the hockey player.

My son was getting fidgety and impatient by now.  He asked me if we could just leave the tooth out.  He didn’t mind the missing tooth… He’s a hockey player.  And, he was quite serious.  “Sorry, dude…  I care, and your mother cares.”

Next, I applied Surpass (Apex Dental Materials) as a bonding agent to the remaining root and my cobbled restoration.  Surpass is a self-etching material that I have found won’t initiate bleeding in delicate exposed soft tissues.  I decided to use Geristore glass dual-cure resin-ionomer (Den-Mat) for the “cement,” as it is reportedly well-tolerated by soft tissues when used to restore root lesions / defects.  I filled the canal with Geristore and seated the “restoration.”  I quickly cleaned up the expressed excess material using a microbrush.  Then I zapped it with the curing light.  I let it auto-cure the rest of the way for 4 minutes, as stipulated by the instructions for Geristore.  Whaaat?  A dentist read the instructions?? 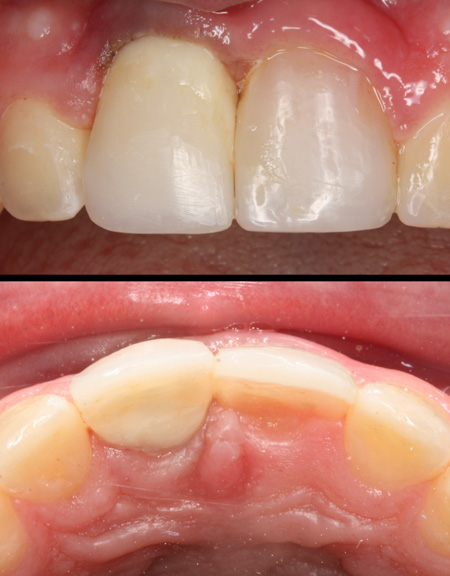 My son had been in the chair for nearly 3 hours.  I gave #8 a good tug with my fingers and it appeared to be solid.  In the end, the crown was not perfectly aligned.  It appeared to be facially-tipped and slightly long.  I used a combination of diamonds and polishing instruments to bring it into “alignment.”  I then checked and adjusted occlusion so that it wasn’t touching in centric or excursions.

I realize this is temporary at best.  It may be VERY temporary.  I’m just trying to buy some more time to decide what is next.  Do we do a flipper?  He’ll hate it and probably won’t wear it.  Do we do a traditional fixed bridge, invasiveness be damned?  Or what about a zirconia-based Maryland bridge?  I’ve done one before. Will the laterals (alone) support a bridge (of either kind)?  They don’t look so hot, either.  Even when he’s old enough for implants, they are generally contraindicated for hockey players until they “retire.”

I’ll be sharing this with my esteemed colleagues and entertaining any ideas or input.  Feel free to chime in with your own in the comments below!

17 Responses to Easter Sunday Emergency Patient – my own son.