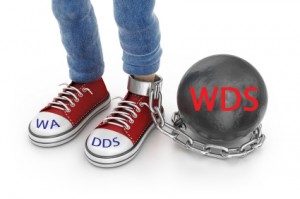 Disclaimer:  The following blog post is my opinion only.  None of it is to be construed as irrefutable fact.  Do your own research.  Run your own math.  Consult your attorney or your dog.  Make your own decisions.

There has been a very active thread over at Dentaltown.com.  It started April 5th, and it’s now 15 pages long.  It’s titled “Delta Dental lowering reimbursement in WA.” I had been seeing it show up in the “Today’s Topics” page, but I ignored it for a long time.  After all, I’m not in Washington.  I’m not a Delta “provider” (hate that derogatory term).  I’m not contracted with ANY dental plan.  My practice is largely fee-for-service.  What do I care?  It doesn’t affect me, right?

Yesterday, something compelled me to read the thread.  All fifteen pages of it.  And, what I read is both frightening and enraging.  If you’ll please indulge my nutshell version of what is going on in Washington is as follows.   (And, I hope some WA dentists will chime in.)

WDS (Washington Dental Service – a member of Delta Dental Plans Association) is a major dental plan player in the State of Washington.  Many dental practices depend on being a “provider,” as most of their patients are on the WDS plan.  Back in 2009, WDS froze fees (no more annual increases).  And, just this month, WDS announced they would be DECREASING fees 15%.  If you account for an average dental practice overhead of 70%, this amounts to a 50% decrease in profit margin.  Now imagine if half or three-quarters of your practice was WDS patients!  This is the case for many dentists in Washington.

Apparently, Boeing (a very large employer in Washington) is the biggest WDS account.  And, Boeing demanded that WDS cut their costs.  If Boeing bails on WDS, then WDS ceases to exist.  But, these events portend something even more sinister.   There is evidence that WDS expects to lose a number of dentists, and they have plans in place to build their own clinics.

Dentists in Washington are in a very tough spot.  And, the deadline is June 15th!  They got just a couple of months warning!  Some are considering cutting hours, cutting staff, cutting salaries, and ultimately being forced to cut quality…. if they stay on the WDS plan.  Some are genuinely concerned they may have to close up shop.  Alternatively, they drop out of WDS and then face trying to keep their practice going without those patients.  They fear that few of the WDS patients would choose to stay in the practice without the full benefit of their WDS plan.  It reminds me of the song by The Clash, “Should I Stay or Should I Go.”

“If I go there will be trouble
An’ if I stay it will be double.”

It sure rings true.  If a dentist leaves WDS, there will be trouble.  And, if he or she stays with WDS it will be DOUBLE.

The term “Dental Warrior” has never been more apropos when it comes to our brethren in the state of Washington.  And, I hope they do realize they are at war.  WDS has declared WAR against dentists.  Yet, they are trying to lull dentists into a false sense of security.  “Were all in this together.”  Bullshit!  This is war.  And, Washington Dental Warriors better lock and load. WDS is counting on the long-held tradition of dentists being divided (and unable to stand up against a hallucinated Goliath).  I cannot find the attribution of this quote, but it’s worth saying, “No man owns the talents of another.” Dentists have the talent.  Without access to that talent, WDS cannot exist.  Dental Warriors have the power to withhold that talent.  United, Dental Warriors are the REAL Goliath.

Personally, if I’m going to die, I’m doing it on MY terms.  I won’t slave away and PAY my way into bankruptcy.  I’d rather take my chances on my own.  I’d rather work hard at marketing my practice and giving top-notch SERVICE to those patients who appreciate it.  Maybe I’ll still go down in flames.  But, it will be a blaze of glory rather than handing a victory to WDS.  “An’ if I stay it will be DOUBLE.” Nope… I’d rather gamble on myself.

For those of us outside Washington… We should pay very close attention to this.  If Delta is “successful” in Washington, you can bet Delta in other states will soon follow… and then other insurance companies.  Washington is the beachhead of this war.

I will close with a quote by Admiral David Glasgow Farragut in the Civil War (referenced in the title of this blog post)…  “Damn the torpedoes!  Full speed ahead!”

And, I offer my dental brothers-in-arms a Navy blessing:  Fair winds and following seas.

Followed by another quote I recently came across:  “Every normal man must be tempted, at times, to spit upon his hands, hoist the black flag, and begin slitting throats.” – H.L. Mencken

19 Responses to Damn the Torpedoes! Full Speed Ahead, Washington Dentists!