Is the Gun Loaded? It Doesn’t Matter! 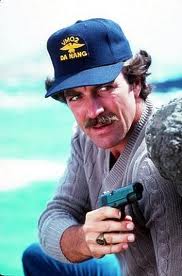 Actor Tom Selleck knows about guns.  He’s currently on the board of directors for the NRA.  Back in 1999, he stood up to Rosie O’Donnell with a very well-reasoned response when she confronted him about his support for the NRA because he had made an ad for them.  While a gun enthusiast in real life, many of his acting roles have also used firearms.

Just a few days ago, on the set of Selleck’s new show, “Blue Bloods,” he stopped production for 10 minutes while verbally dressing down another actor (an extra) who had picked up a real gun being used as a prop for a scene.  The extra was muzzling people around him as he waved the gun in various directions.  Furthermore, he had his finger on the trigger.

Apparently, the exchange went as follows:

“Hey, YOU! What the HELL are you doing? That gun’s NOT a toy — stop waving it around!”

“Look at you…your finger’s STILL ON THE TRIGGER!”

According to American tabloid the National Enquirer, the extra then squirmed, “Is the gun really loaded?”

Selleck replied, “No, it’s not loaded. But when you handle a gun it’s common sense to assume it IS loaded, and NOT point it at people!”

Gun Safety – So Easy an 8 Year-Old Can Do It

I took my 9 year old son to the shooting range yesterday.  He started shooting at age 8.  And, even at 8 years old, he was required by me to recite Colonel Cooper’s Four Rules of Safe Gun Handling.  These rules are CARDINAL rules.  There cannot ever be any latitude under any circumstances, even when you “know it’s not loaded.”  Every time we go to the range, I have my son recite the four rules.

The Four Rules of Gun Safety.

Simple, eh?   Should be common sense, right?  Unfortunately, it’s not what we see, even on most TV shows and movies that feature guns.  We OFTEN see Hollywood characters running with a gun in hand and FINGER ON THE TRIGGER.  If they even pick up a gun or handle a gun in any way, they almost always put their index finger on the trigger!  Aaaagh!  And, unfortunately, we live in a culture that likes to emulate (even subconsciously) what we see from Hollywood. 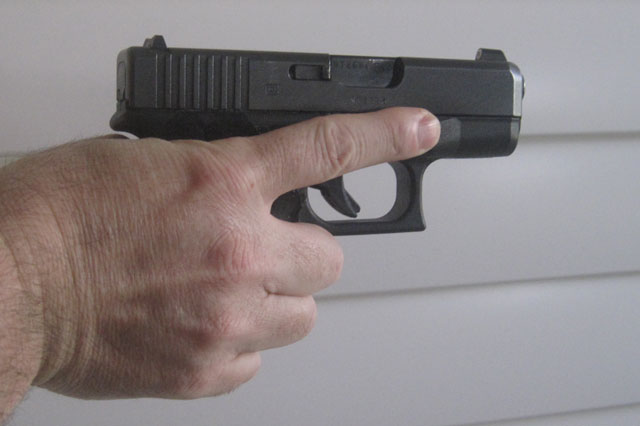 Proper trigger finger discipline. Finger off the trigger until you are on target and intend to fire.  An easy way to do this is to place your index finger along the frame of the gun above the trigger.

In my opinion, there are no “accidental discharges.”  There are only NEGLIGENT DISCHARGES.  There’s a saying that effectively paints a picture, “Keep your booger hook off the bang switch!” 🙂

Just today there was a post on a gun forum by a police officer.  The department mechanic invited him to see a friend’s gun collection.  The gun collection owner repeatedly muzzled the five guys gathered around.  The police officer politely pushed the muzzle in a safe direction as a way to remind the gun owner of rules #1 and #2.  And, then the officer pointed out that the pistol he was holding was out of battery.  That means the slide wasn’t all the way forward.  Just a technical observation that’s irrelevant to gun safety.

The gun owner then racked the slide to make sure it was functioning properly.  At that point he had cocked the hammer.  So, he lowered the hammer with his thumb while pulling the trigger to de-cock it.  The observer then asked him if the lever on the side of the gun was a de-cocker or a safety switch.  The gun owner then decided to demonstrate that the gun was a double-action-only by pulling the trigger of the “unloaded gun.”   BOOM!  He fired a round into the ground with five guys standing around!

My son knows better.  My concern is what happens when other people are handling guns.  Both of my kids have watched the NRA’s Eddie the Eagle gun safety video multiple times.  It teaches kids what to do if they come across a gun.  In my home, all guns are locked up in safes.  My concern is that my children know what to do if they are at a friend’s house and a gun is out in the open or in the hands of a friend.  They learn four very easy steps in the Eddie the Eagle video:

Even my 6 year old daughter can recite these four steps.  And, I drill my kids on it with various scenarios such as, “What do you do if your friend says, ‘I want to show you my daddy’s gun.’?”  Stop.  Don’t touch.  Leave the area.  Tell an adult. Over and over.  I don’t use scare tactics or teach them to be afraid of guns.  It’s just matter-of-fact safety rules, just as you would when teaching a teenager to drive.  Cars aren’t inherently evil or dangerous.  But, if you don’t follow the rules, cars can be deadly.  Regardless of whether you do or don’t have guns in your home, you don’t know what your children may encounter when they’re not at home.  All kids should watch the Eddie the Eagle video (with their parents) and learn the potentially life-saving lesson.

Be safe out there, Dental Warriors.

PS:  Since this post, I’ve made a video on the same topic:  Gun Safety Video by The Dental Warrior.  Check it out below.  I think you’ll like it!  🙂

PPS:  Perhaps the safest gun is a loaded gun?

10 Responses to Is the Gun Loaded? It Doesn’t Matter!