A Loaded Gun Is the Safest Gun. 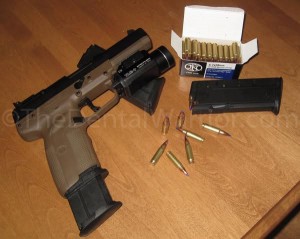 The title sounds counterintuitive, I know.  Indulge me for a moment.  Let’s dissect the notion of a loaded gun being the safest gun.  It may not be as crazy as you think.

I thought it was unloaded! 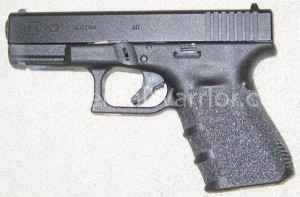 A Glock 23 without a magazine. Does that mean it’s unloaded? NOPE!

Every so often in the news, we hear about an inaccurately-termed “accidental discharge” of a firearm.  There are no “accidental discharges,” only NEGLIGENT discharges (except in the very rare case of a mechanical failure with a firearm).  Many of those who have experienced a negligent discharge have been known to say, “I thought it was unloaded.”  And, THAT is the problem.  These folks treat the gun differently when they THINK it’s unloaded.  And, then…. BANG!

But, even if they see Rule #1, some people think they know it’s unloaded, so they relax.  What if they KNEW it WAS loaded?  Would they relax and play loose with the rules?  Would they point it at their friend?  Would they have their finger on the trigger (See Rule #3)?  Probably not.  I hope not.  But, when they THINK they “know” it’s unloaded, the rules seem to matter less.  And, that’s when bad things happen.  BANG!

One time, at the range… 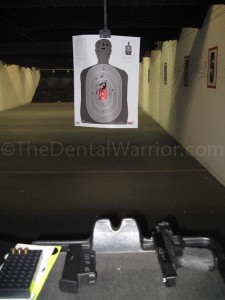 When I’m at the indoor range, I always take a moment to periodically step back out of my booth to observe the other shooters.  I pretend to be taking a break…. crack my knuckles…  stretch.  Are they being safe?  Are they observing the Four Rules?  A couple of months ago, there were two guys sharing the booth next to me.  It appeared one was a local while the other was a visiting friend.  They were sharing a pistol.  Nothing wrong with that.  It’s fun to share this discipline / hobby / sport.

The local guy had just finished firing at his target.  When he stopped, he turned around to chat with his friend.  The only problem was that he still had the pistol in his hand, and he was pointing it directly at his friend’s belly!  I’m usually a bit hesitant to step in to offer advice to strangers at the range, as egos can run big.  But, in this case, I had to say something.

With a smile, I leaned in and said, “Excuse me…  you’re pointing your gun right at your friend.  It should remain pointed down-range.”

I understand, but Rule #1 stipulates that all guns are presumed to be loaded.  Rule #2 is that you should never point it at anything you don’t want to destroy.

He began packing his gear, as they were done with their session.  I went back to my own session.  As the two began to walk out of the range, the local dude turned back and snarkily said, “Thanks again!”

I smiled and waved.  Sadly, this isn’t the first time I’ve seen someone point his gun directly at a companion at the range.  I’m sure it won’t be the last.  I have now decided to always speak up. 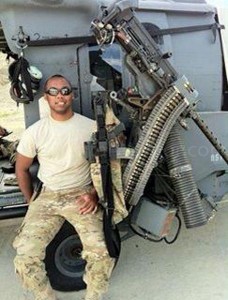 This is a photo of my nephew, serving in the Air Force as a weapons technician. It has nothing to do with this article. Just a cool pic and a proud uncle!

Again, many “accidents” happen because the person handling the gun thought it was unloaded.  They think they’re smarter than Rule #1.  One example is that some people mistakenly think that if the magazine is removed from a semi-auto pistol, the gun is “empty.”  There can still be a round in the chamber.  Then (for reasons I cannot fathom, See Rule #3) they pull the trigger, and BANG!  Surprise!

So, if we’re supposed to treat all guns AS IF they’re loaded, why not KEEP them loaded?  It seems that many people change how they treat firearms when they THINK or are even “sure” they are unloaded.  If you intentionally keep them loaded, you won’t ever think (or treat them as if) they’re unloaded, right?

In case of bad guy…

Another reason to have a gun always loaded is so that it’s ready for use (in the case of self-defense).  After all, it’s the main reason most of us own a firearm.  Right?  And, an unloaded gun is little more than a short, ineffective club.  If you’re ever in a situation requiring you to defend yourself, time will be of the essence.  And, the bad guy will not likely be willing to wait while you find your ammunition and load your firearm.  “Hold that thought, Mr. Bad Guy.  I’ve got to load my pistol.”  There’s also a very good chance that your body will be loaded with adrenaline.  Fine motor skills, like those required to load a revolver or even a semi-auto pistol, are very difficult when your shaking hands are registering a 6.5 on the Richter scale.

Do you think you can load your gun quickly with your hands shaking from an adrenaline dump?

I believe that keeping your defensive firearm loaded makes sense.  Furthermore, I believe you shouldn’t handle the firearm unnecessarily.  That means you don’t repeatedly take it out (of the safe or your holster), to fondle it, “check” it, or show it to your friends.

Speaking of safes…  Keeping your firearm in a safe is smart for obvious reasons.  You don’t want unauthorized people to find it or have access to it.  Of course, this applies to children in the home, especially.

There are quick-access safes (key pad and biometric) available so you can get to your gun quickly, if needed.  If your firearm is not on your person or directly in your control, it should be locked up in a safe of some kind.  Loaded, of course… in my opinion.

What do you think?  Am I making sense?  Chime in below in the comment section!

Disclaimer:  This article is not intended to be a legal opinion, nor is it instructional on how you keep, operate, or store your firearms.  It is simply my personal opinion.  Your mileage may vary.  Know your state / local laws regarding firearm ownership, carry, and storage.  I encourage everyone to get as much firearms training as they can.

11 Responses to A Loaded Gun Is the Safest Gun.