Are we too quick to extract and implant?

Posted on September 14, 2020 by The Dental Warrior 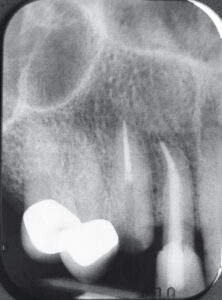 Remember the days when “herodontics” was all the rage?  Hmmmm… maybe you don’t.  Now, if there’s even a question about a tooth’s restorability, it’s reflexively diagnosed as acute titanium deficiency syndrome.  When in doubt, take it out (and replace it with an implant).

Let’s face it.  It’s often much easier, and it’s always more profitable.  Oh, sure… you’ll argue that it’s more “predictable.”  And, you may be right.  Or not.

I’m still willing to try to restore teeth that may be more likely dismissed by today’s “standards.”  My guiding principle is still, “What would I do if this was my mom?”

Such a case came through my office recently.  It wasn’t MY mom, but she’s somebody’s mom.  Her nephew, a periodontist up north, referred her to me.  The 76 y.o. female’s chief complaint was a loose crown (#6).  Tooth #6 had an existing crown and post / core. 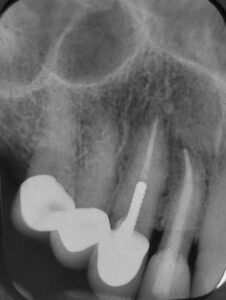 It was readily apparent that the post / core was loose and still attached to the crown.  I tried to gently remove it.  No go.  I used the “crown tapper,” again gently.  No go.  I didn’t want to risk fracturing the root (if it wasn’t already).

I sat the patient up, and we had a discussion.  She was already familiar with implants, as she had several.  We discussed extracting the tooth vs trying to save it.  I explained that I could remove the crown by cutting it off and then seeing what we had to work with afterwards.  I may or may not be able to restore the tooth.

We had been through this before (only 6 months ago) with the patient’s tooth #10.

A very similar situation with the patient’s #10 done 6 months ago.

As you’ll see below, it was “deja vu all over again.”

She rescheduled for the following week (last week) to remove the crown and then explore our options with the additional information gained by removing the crown.

I sectioned the PFZ (zirconia base) crown and removed it.  Underneath, I expected a loose post & core.  I didn’t expect that it would be a cast post & core (don’t see those much these days). 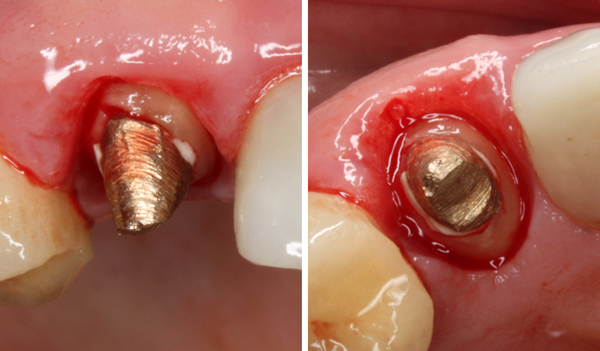 In any case, it was loose, as I expected.  But, it wouldn’t just slide out.  There was some cement attached to it that was engaging in some undercuts.  I picked away as much cement as I could and was finally able to “shimmy” the cast post & core out. 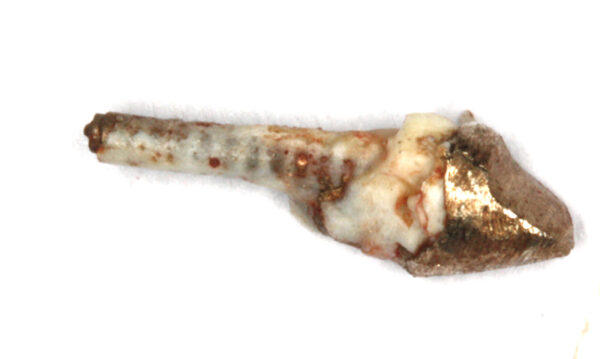 The cast post & core had a lot of cement attached in the coronal area.

I carefully inspected the remaining root with 4.5x telescopes and a headlight and did not find any fractures or decay.  But, the remaining natural tooth structure was far from “ideal.”

I sat the patient up to have the implant vs a “Hail Mary” attempt to save the tooth talk.  We discussed the role of the canine tooth in her bite.  I like to call it a “cornerstone tooth.”  I explained that an implant might be predictable.  But, I also explained that, based on my experience, I thought I had a good shot at saving the tooth.  Furthermore, we had nothing to lose by trying…. other than the money spent.  Together, we decided to save the tooth.

The previously-prepared post space was fairly large, and there was a “keyway” on the disto-facial aspect that was undercut and dangerously thin.  I didn’t want to prep that out any more (to eliminate the undercut) to create a path of insertion for a new cast post & core. 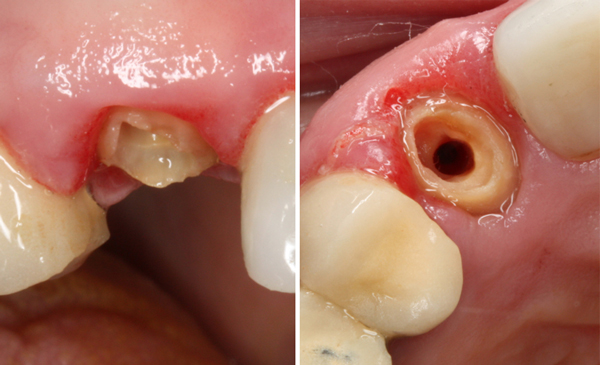 I have not touched the tooth with a bur at this point.

Instead, I decided to place a pre-fabricated #6 Parapost XT, which would fit with very minimal additional prepping of the post space.  And, I could fill the previous “keyway” with the composite build-up without thinning out the root even more.  The Parapost XT has a light, interrupted thread that gives it some extra retention by engaging the coronal dentin a bit.

Before I cemented the post, I packed some Ultradent retraction cord to control hemorrhage and create a dry field. 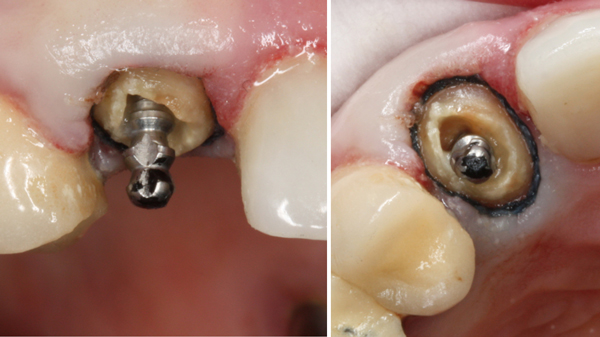 Once I had the post cemented with Unicem, I placed the build-up with Surpass and Anchor (both from Apex Dental Materials). 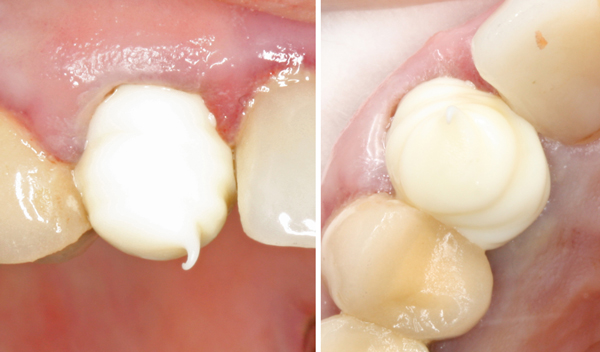 I then prepped for a new PFM crown while leaving the retraction cord in place.  I prefer metal margins (still) for significantly subgingival preps, which I needed to create some ferrule. 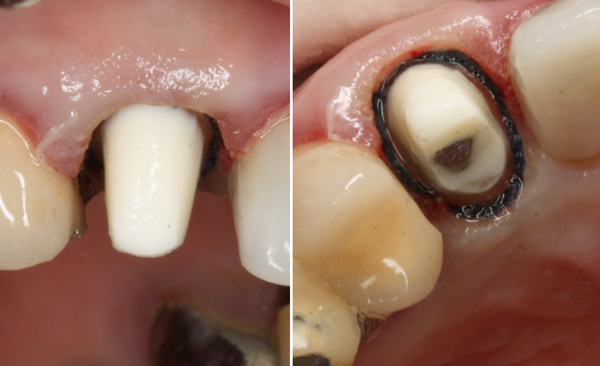 I was happy with the result, being able to place the margin beyond the build up all the way around.  At this point, the tissue, which started off angry… was angrier.  My goal was to make a nice provisional and have the patient return for a final impression in a couple of weeks.

Stay tuned!  I will append this article when she returns for the final impression.

This entry was posted in Case Presentation, Clinical Technique and tagged herodontics, post and core, unrestorable tooth. Bookmark the permalink.

2 Responses to Are we too quick to extract and implant?