Everyone Should Have a .22-LR in Their Collection 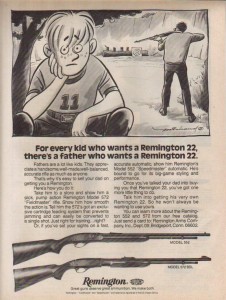 I am often asked, “Which gun should I get?”  And, it’s a nearly impossible question to answer with a singular recommendation.  However, I will have an article in the near future expounding on the factors one should consider.  The short answer:  Every gun has compromises.  There is no perfect gun.  Just like cars or hammers, they make different styles to suit different purposes.

That said… ONWARD with today’s topic.  I think everyone should have a .22-LR (aka “twenty-two”) gun in their collection.  It’s at the smaller end of the caliber spectrum.  Furthermore, I think it’s a great idea to have two of them:  one handgun and one rifle in the .22-LR caliber.  Why?  Read on… 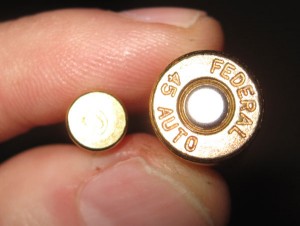 The .22-LR has been around forever.  It is known as a “rimfire” cartridge (as opposed to a centerfire).  They are cheap, cheap, CHEAP.  A bulk box of 550 rounds (Federal Champion) costs about $19 at Walmart.  That’s five-hundred and fifty rounds! 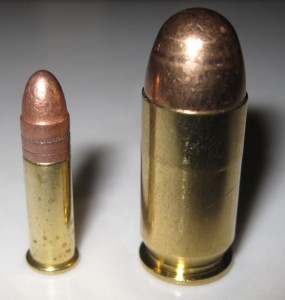 expensive with the higher calibers:  $50 – 75 just for the ammo, assuming four boxes.  Personally, I can easily go through six boxes in an hour.  Do that once a week, and it will add up quickly.   Even doing it once a month will be a significant expense.

On the other hand, you could shoot .22-LR for several hours or all day long for about $20.

Nobody likes to be kicked.

Another big advantage of .22-LR is that it has nearly zero recoil (aka “kick”).  Shooting the bigger calibers not only can hurt you in the wallet, it can hurt your body!  Shooting larger calibers for an extended period of time can make for sore shoulders and hands.  Again… you can shoot .22-LR all day long, and you’ll not notice it at all physically.

Be nice to the noobs…  Take a friend shooting!

For the same reason, .22-LR is a perfect caliber for introducing new shooters to this activity.  New shooters are not familiar with recoil and may be quite intimidated by what physics does with larger calibers.  That’s not even to mention the difference in the noise.  Larger calibers are much louder.

For example, .38-Special and 9-mm are considered rather “mild” by experienced shooters.  But, a new shooter may very well put the gun down after the first shot and say, “That’s enough for me!”  I’d much rather let a new shooter experience the positive aspects of shooting without any intimidation factor working against him or her.  Shooting is FUN!  But, if it scares the hell out of you the first time, you’re not likely to pursue it any further. 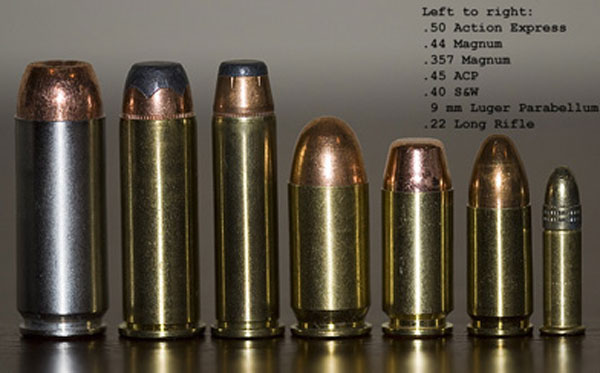 A spectrum of handgun calibers. .22-LR is on the far right.

Shooting a .22-LR gun is a great way for a new shooter to learn trigger control and sight alignment before moving on to larger calibers.

A point that just occurred to me worth mentioning at this time:  I do NOT consider nor recommend a .22-LR as a capable self-defense round.  It’s just not.  Most experts suggest .38-Special and 9-mm are the starting point for self-defense.

Variety is the spice…

Naturally, there’s a big difference between handguns and rifles.  And, each has its strong points (and weaknesses).  But, both have a lot to offer when it comes to enjoying the activity of shooting.  I like to have both kinds.  Having both types of guns in .22-LR also gives me something more to offer a new shooter.  It’s more fun for a new shooter when he or she is actually able to hit the target (and see the results).  Handguns are great for shorter distances, whereas rifles are better for long-range accuracy.

My son started shooting at eight years old.  I got him a Keystone Sporting Arms “Crickett,” which is a “youth model” made specifically for kids.  It’s a single-shot, bolt-action .22-LR rifle.  Load one round.  Cock it.  Fire one round.  It forces a new and young shooter to slow down and think about each shot.  Here’s my son, 2 days after his 8th birthday, shooting for his first time:

A year later, he was tired of one round at a time, so I got him the venerated Ruger 10-22 semi-automatic rifle.

The Ruger 10/22 rifle is considered a “must own” classic.

Now he could load a magazine and fire 10 to 25 rounds (depending on which magazine is used) without having to reload.  He’s a happy boy!  Now my 7 year old daughter is asking for a PINK rifle!  When she turns 8, she’ll have it.  (Edited to add… I couldn’t find a pink version, but she got a Ruger American Rimfire.  See video below!)

Daddy has to have toys, too!

Got a rifle… now for a handgun.

While there is a tremendous variety of .22-LR handguns out there, it took me a while to find one that I thought would suit my family and me.  Ruger very recently released a brand new .22-LR semi-auto pistol called the SR22 Pistol.  Reviews were all positive and it’s a relatively inexpensive pistol.  It wasn’t easy to find one, but I did. 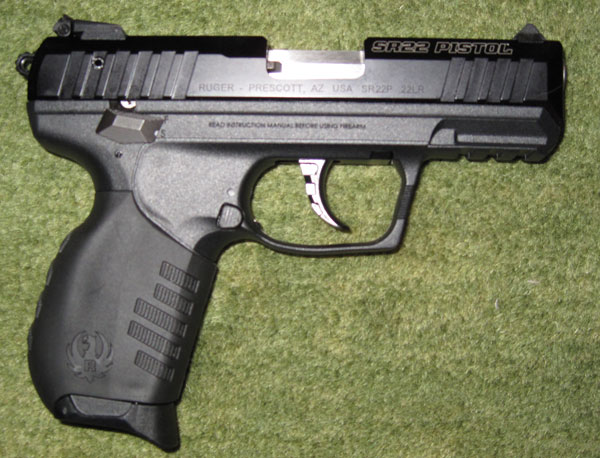 Just today, I took the SR22 Pistol to the range for a shake-down shoot.  I put 160 rounds of Walmart’s Federal Champion and 100 rounds of CCI Minimag ammo through it.  The pistol functioned flawlessly… not a single hiccup with nearly 300 rounds fired.  In single-action, the trigger is quite crisp and has a fairly short reset.

It has a 3.5-inch barrel.  It comes with two 10-round magazines.  It also includes two grips (small and large).  The large grip is on the gun in the photo above.  It’s not that big, though (especially if you’re used to blocky grips like Glocks).  The small grip would be perfect for children or folks with very small hands.  The magazines also come with two different floor-plates:  One with a finger extension.  The other is a standard flat floor-plate.  The finger extension is shown in the picture above.

What’s nice about Ruger’s SR22 is that it looks, feels, and functions like most other (larger caliber) semi-auto pistols.  This makes it a good “training” pistol that won’t break the bank with ammo costs.

I wouldn’t consider it a super-accurate competition-worthy pistol.  But, it is perfect for family plinking fun.  And, I submit it’s an outstanding way to introduce a new shooter to handguns.

You can’t have just one!

Of course, you should practice with your larger calibers and certainly be proficient with any gun intended for self-defense.  But, for extended range sessions, getting rid of varmints on the hacienda, or just plinking cans on fence-posts, a .22-LR handgun or rifle can be loads of cheap fun. 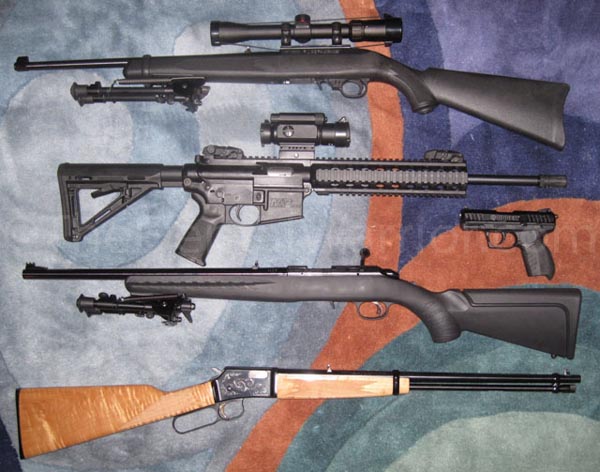 15 Responses to Everyone Should Have a .22-LR in Their Collection