See the Light – Be a Better Dentist! 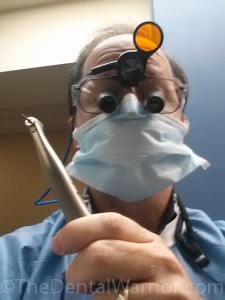 I have previously written about the value of using magnification and a headlight.  It’s a good time to revisit the idea, as I had to recently replace my headlight.

I’ve been using my Designs for Vision “DayLite” along with magnification for many years.  I think it has been at least 10 years that I’ve had the LED DayLite.  It might be more.  I’m not sure.  I may call and ask the folks at DFV and come back and edit this article for accuracy.  Before that, I went through several of the old fiber-optic lights.

Your mission, should you choose to accept it…

I use my DFV telescopes (they’re not actually “loupes,” though that is the popular term) with the headlight every single day… ALL day.  They are what I call “mission-critical” equipment.  They are as essential as my compressor and vacuum systems.  I truly cannot operate without them.  MISSION-CRITICAL.  I would not try to treat patients without them, nor would I be a patient for a dentist who doesn’t use them.  I really wouldn’t.  So, yeah… call me a snob.  I’m cool with that.  🙂

For several months, I’ve been having a problem with my old DayLite headlight.  It was an electrical connection issue between the cable and the battery.  So, the light would sometimes flicker on and off, depending on my movement.  Even if I tightened the cable lock-nut down, it would intermittently cut off.  If I loosened it, it would cut off.  So, I’d have to fiddle with it to keep the light on, sometimes.  It was frustrating to say the least.  But, I hesitated to send it off for repairs, since I didn’t have a back-up.  So, I just “dealt with it.”

Bohemia, we have a problem. 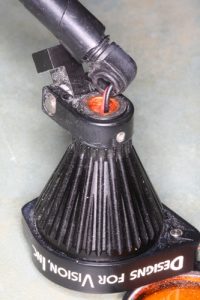 But, then a couple of weeks ago, I noticed that where the cable connected to the headlamp unit, it was broken!  Oh no!  It was now connected only by the two wires inside the cable.  This isn’t going to last long!  And, I don’t want to be left hanging without a light!  So, I called Designs for Vision (located in Bohemia, NY) and inquired about what to do.  I could return it for repairs, of course.  But, then I’m left with no light!  Or…. I could get a new light… an even BETTER light.

I couldn’t really complain after beating on this light for 10 years or more.

I had already perused their latest product offerings on the DFV website.  They have way more variety in their products today!  I was intrigued by the new “cordless” headlights.  The battery is self-contained in the headlamp unit that mounts on your glasses.  The idea of not having a cable running down the temple of the glasses, back to a clip on the back of my collar, and then down to a battery pack on my belt or in my pocket was attractive. 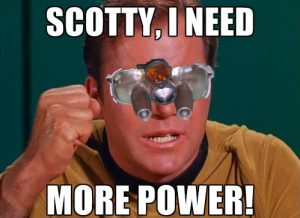 That’s when my rep told me, “If you’ve been using the corded DayLite, you should know that the cordless version is about HALF as bright.”  Rut-roh!  Of course, I should have known that a cordless version with a small self-contained battery just won’t have the same power.  That’s not going to work for me.  So, I’ve got to stick with a corded version with a separate battery pack.  I need the power and the brightness!   I would need to go with the newest full-size version of the corded LED DayLite HDi.  They have a “mini” version, too.  But, I tend to like the “big guns!”   😉   Really, you should speak with your DFV rep and discuss your needs when it comes to brightness levels.  I’m glad I did, thereby avoiding a mistake.

Of course, buying a new light is a substantially higher expense than getting the old one repaired.  Let’s be honest here… they are pretty “proud” of these lights.  I was looking at about $1200 for a freakin’ fancy flashlight!  😉  OK, but it’s MISSION CRITICAL.  And, hey… they’re also offering a trade-in for my old broken light that will take $200 off the price.  So, we’re talking about a cool grand for the light.  Take a breath…. I’m in!  Put the order in! 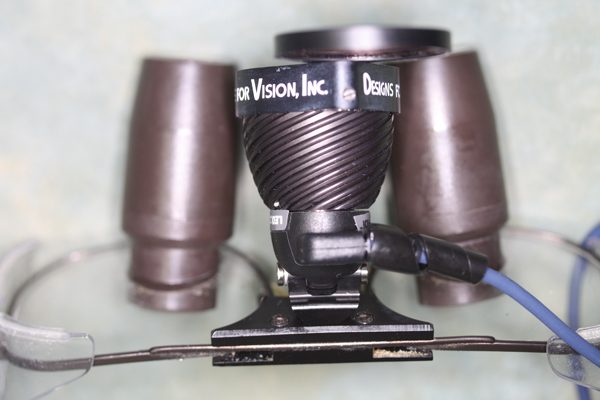 The new DayLite HDi attached to my glasses frame. Of course, the new set-up came with a mounting bracket. But, it was identical to my old one. So, I was able to attach the new light without changing the bracket.

When I consider the importance of the light, and that the old one lasted me 10+ years, it comes to about $100 / year.   A bargain, considering the value of the light!  It’s been utterly reliable.  I’ve had to replace some batteries over those years.  But, the light itself… rock solid.  Again, I use my telescopes and headlight ALL day, EVERY DAY.

Yes, there are a lot of new players in this field.  Many of them are lower-priced.  And, competition is always good.  But, I’ve looked at some of the cheaper lights, many at half the price.  I’m tellin’ ya…. they ain’t the same.  You DO get what you pay for, most of the time.  This is one of those times. 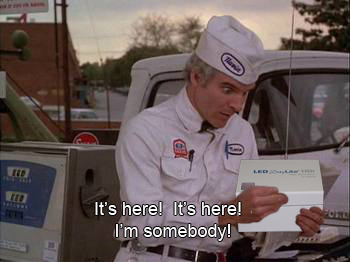 I ordered the new LED DayLite HDi headlight.  What is HDi?  It stands for High Definition Imaging.  What does that mean?  It means that the light beam is very focused and uniformly bright.  According to DFV, it delivers 45% more light.

Now that I’ve seen it, it looks very bright and even, like a movie projector with no film in it.  The edges of the light are sharp, rather than diffuse.  There are no “hot spots” or “dark spots.”  It’s very much like the projector headlights you see in luxury cars these days.  Solid, bright light from edge-to-edge.  It’s not really a “spot” of light.  It’s a sharply-defined projected IMAGE.  Another way to describe it would be to borrow from our radiography lexicon and call it a “collimated beam of light.”

This is DFV’s graphic (borrowed from their website) showing the difference that HDi offers. Now having seen it for myself, in person, I’ll say it doesn’t do it justice. 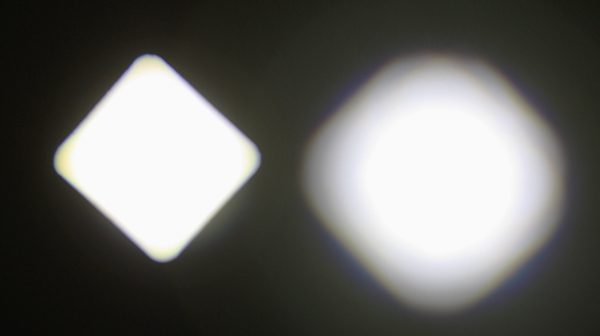 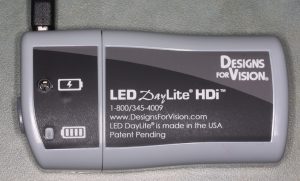 The light kit came in a very nice box with a magnetic closure.  The parts were nestled in custom-cut foam in two layers.  Packaging matters with important (and expensive) gear.

The DayLite HDi comes with two batteries.  They are different than my old DFV batteries.  One of the new features is that the batteries are user-replaceable.  With the old batteries, you had to send the battery pack back to DFV for service.  You can even link the two batteries in tandem for longer procedures.  Though, I cannot imagine working without a break for that long!  Another change is the power switch.  It’s now a push-button switch, instead of a rotary switch, making it easier to activate “aseptically.”

One of the changes Designs for Vision made with the new light that I think is great, is that the power cord is detachable at both ends (USB ports) rather than hardwired to the headlamp, like the older model.  The cord is user-replaceable.

I used the new light with today’s patients.  It was fantastic.  The quality of illumination is excellent.  Money well spent!  Oh… make sure you ask for the optional orange flip-down filter for when you are sculpting composite restorations or using other light-activated materials.  The filter allows you to work without prematurely curing the material with the unfiltered light.

The new battery pack has a push-button on / off switch.  There are three functions with each push of the button.  The first push turns the light on at the 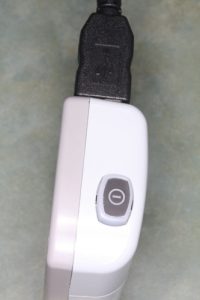 brightest level.  The second push turns the light down to a slightly (almost imperceptible) lower level of brightness.  The third push turns it off.  So, you don’t have the continuously variable adjustment of the light brightness.  But, with the old light, I always used it at the brightest setting anyway.

My only real complaint about the new power button is that it’s easy to accidentally activate it (turn the light on) if you inadvertently bump it.  But, I think it’s a minor issue.

Update…  It turns out, I now prefer to wear the battery pack on my belt.  I tried the battery with an extension cord in my gown pocket, and ended up going back to the battery on the belt.  I put my light and scopes on BEFORE I put on my disposable gown.  It’s a “cleaner” set-up, and the cord doesn’t get snagged on things like my chair.   So, I now retract this “nit-pick.”

Update #2:  It’s tempting to spend less and BELIEVE that the cheaper light (or scopes) are “just as good” as the more expensive DFV offerings.  They aren’t.  Just a couple of weeks ago, I was at a hands-on CE course.  A bunch of us had scopes and lights.  We all shined our lights up against the wall to compare the output.  A “shine-off,” if you will.  😀  My DFV HDi light blew them all away…. not just in terms of brightness, but also in the uniformity of the brightness across the light spot.  The spot is very “clean” and homogenous.  BIG DIFFERENCE.  The other dentists’ comments summed it up, “Oh, wow.”

Treat yourself and your patients to Designs for Vision!

Besides the quality of their products, I’ve also written about my positive experience with Designs for Vision service in the past.  Designs for Vision is one of the originals in this industry.  They have a long track record of quality in both the dental and medical professions.  Don’t skimp on Mission Critical items in your dental practice!  You will not regret getting the best and doing your best (for your patients).  Bang for the buck, it’s a great value that will enhance your dentistry every single day.  Click on Designs for Vision to check out their goodies!  Then give them a call, and they’ll hook you up with your local rep!

I rate the LED DayLite HDi, “five (out of five) no-brainers.”

6 Responses to See the Light – Be a Better Dentist!