Have you REALLY taught your children to not talk to strangers? 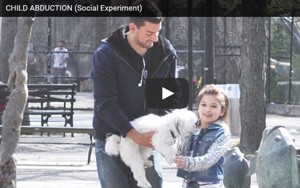 There is a video making the rounds on Facebook intended to illustrate how many children, despite being taught not to talk to strangers, will take the hands of strangers and walk away with them without hesitation.

The lead in for the video cautions, “Parents keep your eyes on your children in public places!”   That’s certainly good advice.  And, it sets up the viewer to agree with the premise of the video.

The implied lesson is that we need to talk to our children EVEN MORE about avoiding contact with strangers.  But, do we?

Watch the video.  It’s just 3-1/2 minutes long.  Then I’ll get down to fisking it in a way you probably won’t expect.  Video after the jump…

So, what’s REALLY wrong with this picture….er… video?

It was interesting that two of the mothers claimed they teach their children to not talk to strangers EVERY DAY.  Yeah… riiiiiight.  Every day??  Sure you do.  Doesn’t everyone?

What is the best way to teach behaviors to our children?  By words?  Or, by our own actions?  I hope the answer to my rhetorical question is self-evident.

What did the moms do in this video?  Every one of them in the video did not bat an eyelash as a complete stranger approached them.  Not one of them seemed to have any issue with that stranger sitting, not at the other end of the bench, but right next to them on the bench.  Then he extended his hand (to shake) and the women eagerly obliged, allowing this stranger to touch them and get within “bad breath distance.”  None of the moms were uncomfortable.  None of them even “scooched” away from this stranger.  They were all sitting ducks… mother duckers?  😉 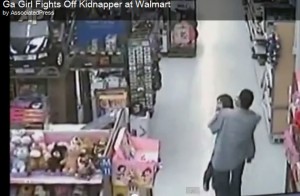 A real child abduction attempt in a Walmart.

Then this stranger tells the moms he’s “doing a social experiment” and asks for permission to approach their children to determine if they could be abducted by a stranger.  And, these moms AGREE!  “Sure!  Go ahead!”  Holy crap!  Not one considered that this could be a ruse.  They didn’t hesitate for a moment in granting him permission.  Not one of the mothers demonstrated ANY evidence of heightened alert.  Not one of them even stood up to watch or get a bit closer to their children.  And, when the stranger is successful in leading the child away by the hand, the mothers REMAIN SEATED while dramatically expressing shock.

The kids are simply mimicking their mothers’ behavior.  The mothers let a complete stranger approach and touch them.  It’s likely not the first time they’ve exhibited this behavior in view of their children.  And, THEN, the mothers said… to a COMPLETE STRANGER, “Sure! Go ahead and see if you can abduct my child.”  The mothers should know better!  But, if they don’t… their kids won’t, either.  Think about it.  The behavior of children most often mirrors the parents’ behavior.

The mothers fell for the exact same trick as the kids… “a nice man with a doggie.”  The presence of the doggie was (just as) disarming to the mothers before he ever got to their kids.  The man approached the moms, sat next to them, shook hands with them (touched them), and instantly befriended them.  Then the total stranger asked the moms if he could attempt to abduct their children.  And, the moms said, “YES!”

The moral of the story isn’t what you think. 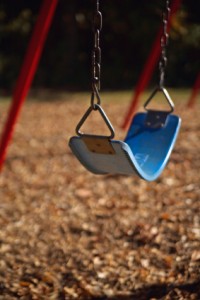 The message that accompanies this video making the rounds on Facebook is naive and dangerous.The notion being foisted on viewers is that the problem is with the children.  The implication is that children haven’t been properly or effectively taught by their parents to avoid strangers.  The problem is that the MOMS have taught their children exactly the opposite by their OWN ACTIONS.  Their actions contradict their words.  The moms talked to the stranger.  The moms took the stranger’s hand!  And, then the moms ABANDONED their own children to that stranger.

Never let a stranger get into your “personal space” like that.  It makes you VERY vulnerable.  Violent criminals will try anything to get close enough to you to hurt you.  They may do this by asking benign questions.  They will appear friendly or appear to need help.  They will leverage your natural inclination to be helpful and polite.  They may extend their hand to shake yours.  This is a way to gain physical control over you.  That wasn’t the case in this video.  It IS the case in many real abductions, rapes, muggings, and murders.  There is no way to know who is a harmless fellow citizen vs a bad guy with criminal intent.

You are not obligated to be nice to strangers! 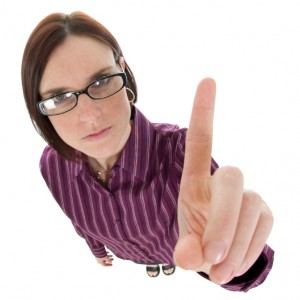 In a case like the situation demonstrated in the video, the nice guy with the puppy could have picked up your child and run while an accomplice ambushed you from behind, preventing any effort by you to save your child.  Or, the man talking to you could be a distraction while an accomplice scoops up your kid, and you’re busy making polite eye contact with your new “friend.”  In my opinion, the mothers in this video were recklessly oblivious and frighteningly willing to give permission to a stranger asking to approach their children.  I highly recommend reading:  The Gift of Fear by Gavin DeBecker.

9 Responses to Mommas, don’t let your babies grow up to pet strange puppies.