Posted on February 9, 2012 by The Dental Warrior

Now on to your regularly scheduled program…

I’m a blunt guy.  You’ll never be left wondering if what I say is congruent with what I think.  Surely some will think I’m being politically incorrect or simply “unprofessional.”  Maybe some will even accuse me of being unsympathetic or just intolerant.  No matter.  Today’s installment is not a contemptuous rant.  Rather, it’s just a peek into the reality in which we all live.  Fortunately, it represents a very small sliver of the bigger picture.

This week, the sliver pierced the happy kingdom I call my practice.  I had two callers to my office that were blatant examples of patients who simply don’t belong in my practice.

This man was referred by my favorite endodontist’s office.  Certainly, I appreciate such referrals and votes of confidence.  I get as much from my specialists as they do from me… maybe even more.  I have great relationships with my specialists. 🙂

The caller apparently had two teeth treated by the endodontist several months ago and needed to have them restored.  He also wanted to get his teeth cleaned (and presumably a check-up). 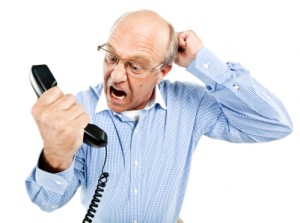 My front desk told him what our office hours are (Mon – Thu  9 to 5).  She also explained which days we had available for hygiene.  He then got very irate and asked why we don’t work Fridays and why the hygienist worked those certain days.  His questions were not asked in a kind or inquisitive manner.  Rather, he was angry and demanded to know why.  My front desk explained (very calmly) that it was simply the doctor’s choice and decision.  He then demanded to talk to me.  My FD explained that I would not be coming to the phone to explain our office hours or business practices.  And, then the conversation ended.

Later he called back and spoke with my assistant who happened to answer the phone.  He still wanted to know why we had the hours we had.  Bye-bye crazy man!

It’s MY practice.  I practice and live on MY terms.  I owe exactly NOBODY an explanation.  Furthermore, I’ve learned not to engage in a battle of wits with an unarmed man.

My FD called the endodontist’s office and spoke with his FD.  She could barely remember the man, as he had just the two root canals, and it was nearly 6 months ago.

Actually, in this case, it started as an email through my website requesting an appointment for a “second opinion about a temporary bridge that is uncomfortable.”  The online appointment request form also indicated that she was an existing patient.  Hmmm…. I don’t recognize the name.  And, obviously I didn’t start the bridge in question, as it’s a second opinion.  So, we looked her up on the computer, and indeed she had been to my office before…  ONCE… in 2006…. for an aching third molar (bombed out).  I referred her to an oral surgeon, and that was the last we saw of her.  Yeah… “existing patient.”  OK.

My FD called her to set up the appointment to evaluate her complaint.  My FD always explains any fees up front, so patients aren’t surprised.  She told her the fee for a limited exam and possibly an x-ray or two.  The lady exclaimed she did NOT want any x-rays.  Furthermore the lady said she did not want to pay for an exam.  “I just want a second opinion.”

So, it seems she really wants me to second-guess the current treating dentist, AND she wants me to do it for FREE.  Ummm… yeah… bye-bye crazy lady.

Life’s been good to me so far…

Life is too short to deal with people who are simply irrational.  I have no interest… not even for money… in working for people who seek only to berate my staff (or me) and question my every move.  If you don’t trust me… I don’t trust YOU.  People like this are a LIABILITY (and most likely to sue you for any perceived impropriety).

I’m making dentures, my fans they can’t wait…  They write me emails, tell me I’m great.

I’ve got an office, diplomas on the wall.  Just leave a voicemail, maybe I’ll call.

On Facebook today, another dentist told a story about a patient who was unhappy about all the “technology” in the office.  The dentist found 3 cavities, and the new patient said, “My last dentist didn’t find them.  I’m just paying for all this fancy technology.”  Bye-bye crazy person!

No soup for you!

It’s truly astonishing to me that any person would go to a professional’s office, seeking care, and then begin the “relationship” by being confrontational and accusatory.  I wonder if when they go to a restaurant, they go back to the kitchen and insult the chef before sitting down to eat a meal made by the same chef.  Ummm… I don’t think I’d eat that soup, Nimrod.

I don’t suffer fools well.  And, with each passing year, I am even less tolerant.  I’m good at what I do.  If you don’t want what I have to offer, don’t waste my time with conspiracies, denials, or rants about previous dentists.  Better yet, don’t darken my doorway.  Go somewhere else.  There are 25 dentists just on my street.

Copyright protected by Digiprove © 2013 The Dental Warrior®
This entry was posted in Editorial, Practice Management, What Happened Today and tagged x-ray refusal, x-rays. Bookmark the permalink.