The Power of Photography (and a quick mock-up)

Posted on February 4, 2020 by The Dental Warrior

A quick blog post here.  A recently new patient has had some basic restorative treatment.  I asked him about his front chipped teeth.  The initial chips were caused by an accident when he was a kid.  He never had them repaired.  But, they are chipping away even more in recent years.

He was reluctant to repair them, because he felt that the “imperfection” was part of his “look.”  He also mentioned that he did not want perfectly straight edges on his teeth.  He liked the imperfect look.  On the other hand, he was concerned that they may break even more.  His initial reaction was to put it off for now.

Today, he was in for a composite restoration of a cervical “abfraction.”  After I was done with that, I asked him if it would be OK to do a mock-up on the two front teeth.  It would give him an idea of what is possible with bonding.  I also told him we can “characterize” the edges so that they’re not perfectly straight.

I did the mock-up in about 2 minutes.  I intentionally made the incisal edges “imperfect.”

I took before and after photos and gave them to the patient.  He was impressed!  He’ll be back to have it done! 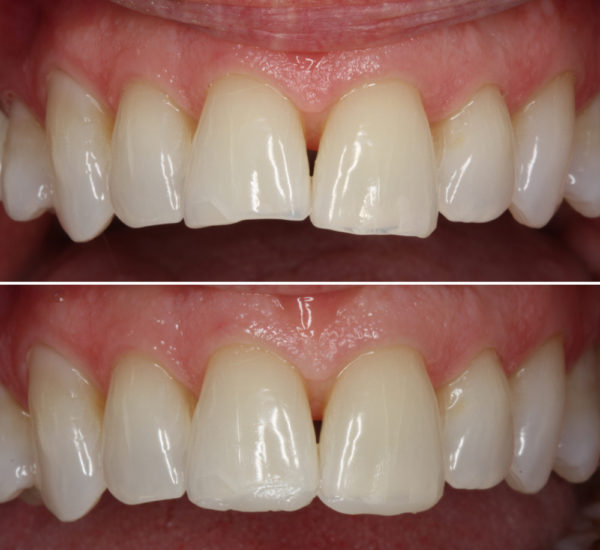 For the final restorations, I’ll spend a bit more time on the central incisal embrasure. I like them a bit smaller and sharper.