THIS is Condition White.

I’ve mentioned Situational Awareness in many of my posts about personal safety and security.  Most victims of violent crime should have seen it coming.  But, they were unaware of their surroundings or the behavior of the people around them.

Just a few days ago, I wrote about a street crime, the “knockout game,” that has had increased media coverage lately.  The surveillance videos are evidence of the victims being knocked out (literally), and in some cases KILLED, were oblivious to what was going on around them.  Condition White. 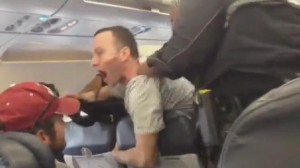 On the news today, is the story of an airline passenger that simply “goes nuts.”  He’s threatening to blow up the aircraft as the police are pulling him out.  Watch the video below.  The police don’t yet have physical control of him.  He’s literally in the faces of the passengers in the row behind him.  He could cause significant injury to any one of them.  Yet, they SIT THERE like statues!!  Holy shit.  Their natural instincts for self-preservation are completely suppressed.  That’s “Condition White” even though the threat is inches from your nose!  Look at the guy in the red ball cap.  He’s doing NOTHING…. sitting there like a good sheeple.  Hell, he didn’t even put his hands up to shield his face.  He’s VERY lucky the crazy guy didn’t strike.  A sitting duck?  No… a sitting dumbfuck.

If I was sitting there, I’d be MOVING QUICKLY out of my seat and back down the aisle AWAY from this crazy man.  Listen to your INSTINCTS, people!  Move AWAY from danger.  Don’t depend on others to save or protect you.  The nice flight attendant with the microphone, 50 feet away, telling you to remain seated is NOT your friend in this case.

Copyright protected by Digiprove © 2013 The Dental Warrior®
This entry was posted in Personal Security & Safety. Bookmark the permalink.

6 Responses to THIS is Condition White.