Posted on September 28, 2012 by The Dental Warrior 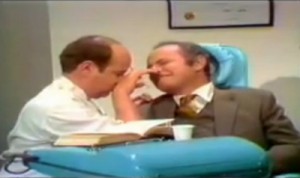 To say dentists don’t get much glory in the popular media is a massive understatement.  Rather, we get the opposite of glory.  There have been dozens of TV shows and movies glamorizing the medical profession.  In the off-chance a dentist is portrayed at all in pop culture, it’s usually as a bumbling fool who is socially awkward and lacks any semblance of self-esteem.  There’s even a persistent urban legend that we have the highest suicide rate.

Plastic surgeons get a lot of credit for changing lives.  Dentists?  Not so much.  The funny thing is that a smile makeover can have a far more dramatic impact on appearance than rhinoplasty, blepharoplasty, or even full face lifts – all of which are VERY invasive and involve significant risks.  A smile makeover or full mouth rehab is not nearly as invasive or risky.  But, the results can be stunning.

I’ve done many cosmetic / rehab cases over the years.  And, in this current economy, they’ve been more scarce.  But, when I do get to do them, I still find them so professionally rewarding.  The ability to have such a deep impact on the quality of someone’s life… as a dentist… Well, that’s just COOL!

Dad’s teeth are in trouble.

Over the course of the past several years, my dad and I have talked about fixing his teeth.  He has a history of gastric reflux (now medicated) along with a dash of bruxism.  The result has been the utter destruction of his teeth.  He also has a deep anterior overbite.  Like many people, he wasn’t too excited at the prospect of a full mouth reconstruction.  So, he put it off… and put it off… until he couldn’t.  The upper anterior teeth were eggshell-thin and breaking down.  He also told me that he hasn’t been able to look in the mirror at his teeth out of shame and just plain revulsion.  He literally would not look at his own teeth. 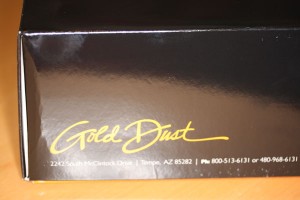 Even though I offered to refer my dad to a respected prosthodontist about an hour from where he lives in Arkansas (yes… they have dentists there!), he insisted on traveling to see me.  Fortunately, at his last visit, I did make mounted study models.  So, I sent them off to Gold Dust Dental Lab in Arizona for a full diagnostic wax-up “kit.”  Kit?  Yep!  What they send back is more than just the wax-up.  It’s an entire “kit” that nearly blue-prints the process of prepping the teeth and making provisionals. 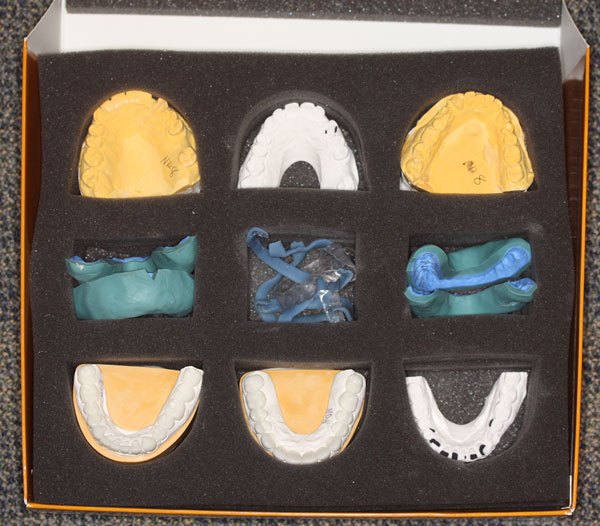 This is how the Gold Dust “wax-up kit” arrives. Actually… not exactly. This is my attempt to re-pack it after unboxing it all and removing the bubble-wrap. They do a much better job of packing it!

Included in the kit are Sil-tec impressions of the wax-up for making provisionals.  There are two types of reduction guides, including a clear matrix along with facial and lingual reduction indexes.  These guides really make the prep appointment more efficient and more precise.  We’ll take a closer look at the wax-up later.

Retracted left and right, in occlusion.  That lower left canine is occluding with the tissue in the monster diastema between the upper canine and lateral!

Let’s take a closer look at the erosion of the upper anteriors.  Hey!  I can see my pulp chamber from here!

Holy cow, eh???  Where to start?  Dad’s dentition was the equivalent of running on four bald tires, and the only solution was a whole new set of tires.  But, we can’t go in there and start prepping willy-nilly without knowing the final destination, right?  So, off to the lab the case goes for a full diagnostic wax-up!

Dad and I made a date, and my schedule was cleared.

Root canal treatment #7, 8, 9, 10 done in anticipation of needing posts for restorative purposes. Treatment of #12 was for an apical abscess.

The next day, I prepped and temped the lower anterior ten teeth (#s 20 – 29).  I used the Sil-tec matrix provided by Gold Dust to help me avoid over-reducing the teeth.  I loaded it with Luxatemp and seated it (without any bonding agent).  This gave me “ideal” teeth to prep.  As you’ll see, the incisal reduction was pretty much done for me courtesy of Dad’s acid erosion and attrition.

I still use depth cuts when I prep. I find the “connect-the-dots” approach leads to more uniform reduction.

Continuing the preps. After doing an ideal incisal reduction of the “Luxatemped” teeth, I ended up right back where Dad had worn them down.

Using the clear stent to visualize wax-up over preps. 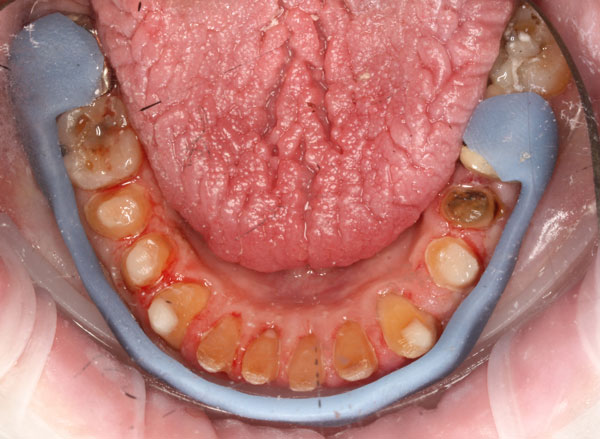 Facial reduction guide.  These are made with “Triad.”  Note that at this point I needed to go back and reduce the facial of #22 further.

Next, I placed posts where I had previously done root canal therapy in order to provide retention for the build-ups. 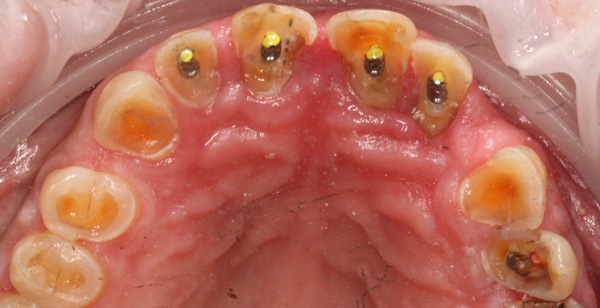 I cleaned up any decay and removed old restoratons on the upper front ten teeth.  Then, instead of doing the Luxatemp trick I did on the lowers, I used Pentron’s Build-it FR composite build-up material loaded into the Sil-tec impression of the wax-up.  It was bonded with 3M’s Scotchbond Universal.

Upper arch built up with bonded composite placed in the Sil-tec matrix of the wax-up.

At this point, Dad was still up for more, and I was still feeling ambitious.  So I started prepping the upper anteriors.  But, after four preps (7 – 10), I was spent, and so was Dad.  I made provisionals for those teeth using the same Sil-tec matrix.  And, we called it a day.

The next day’s smile (not numb) after upper front four were prepped. Canines back are still build-ups.

On Day 3, I prepped the rest of the upper arch and made provisionals.  Again, I used all the guides provided by Gold Dust dental lab to help me prep and give them adequate room for porcelain. 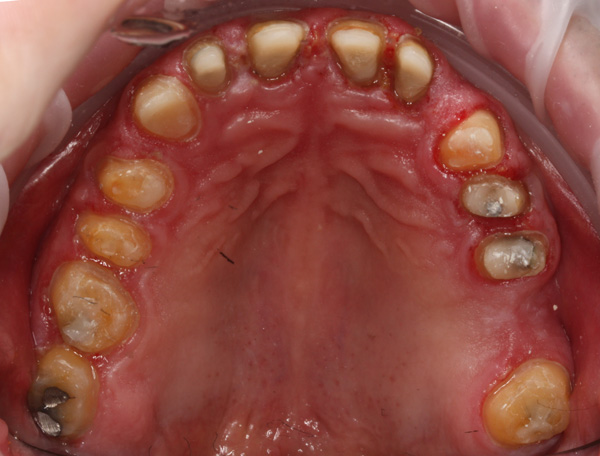 I was pretty beat at this point, and so was Dad.  I didn’t want to make the impressions while I was that fatigued.  I made provisionals and called it a day.

On Day 4, I removed the upper provisionals and reviewed my preps.  I touched them up and then used my Picasso Lite diode laser for gingival retraction.  I took two Impregum impressions for good measure (plus I didn’t like the margin on one tooth).  Then I took a facebow record.  I made a “sequential” bite registration by placing the anterior segment of the provisionals on #7 – 10 and squirting Blu Mousse on the posteriors.  Then I removed the anterior provisionals and filled in the blank with more Blu Mousse.  After that, I had my dad stand up and added a “stick” to the anterior area of the bite registration, leveling it parallel to the floor / horizon. 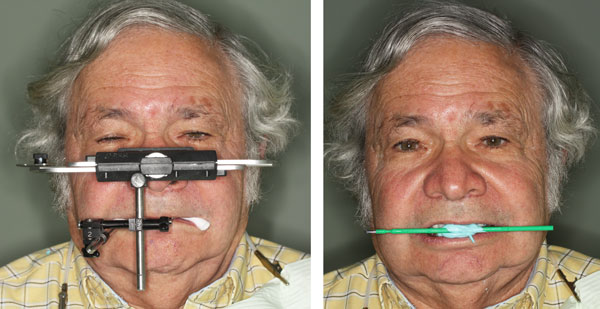 At this point in the LONG appointment, the fatigue is comically evident in the patient’s face. Dad’s TIRED! But, if I had turned the camera on myself, the expression on my face would be similar!  The more information I send to the lab, the better (and that includes these photos).

After cementing the provisionals with Tempbond, we made impressions of the upper and lower arches and another “stick bite.”  We also discussed the shade of the final restorations.  I wrongly predicted that he would go more “natural.”  Dad has decided to go “white.”  Really white.  We also discussed incisal translucency and surface texture.

Some photos of Day 4: 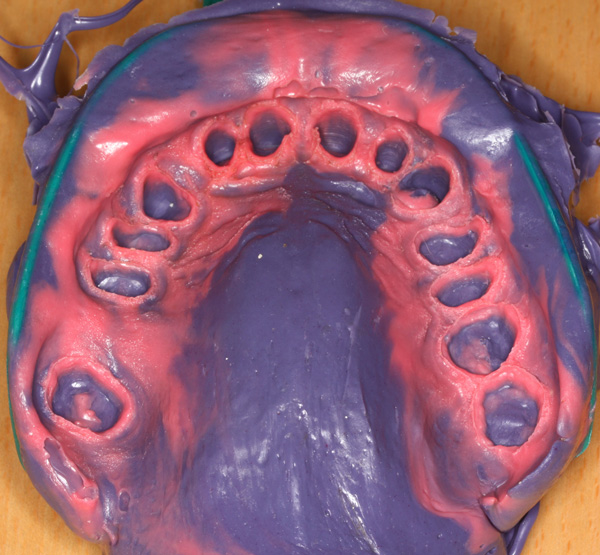 One of 2 final impressions. 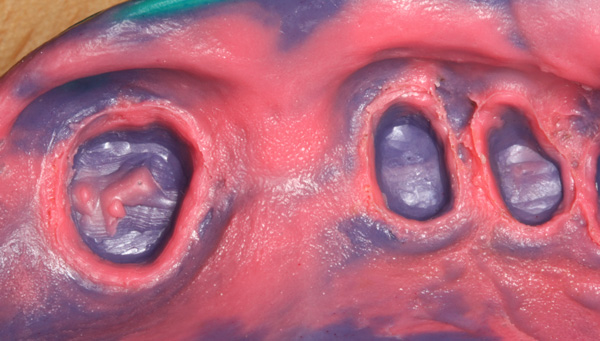 Dad was a real “trooper” during four straight days of intense dental treatment.  It was a butt-kicker for both of us!

The day after Day 4, I took a facial photo of Dad.  I have to admit it was strange to see Dad with teeth that showed.  He was very happy, though!  As many times as I’ve done this type of treatment, I’m still amazed at the way a dental reconstruction can alter the face.  My dad looks thinner, as his face is now longer. 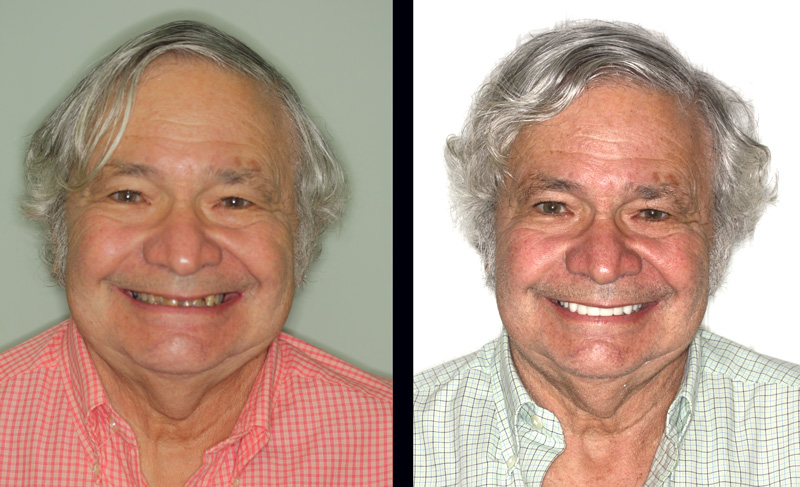 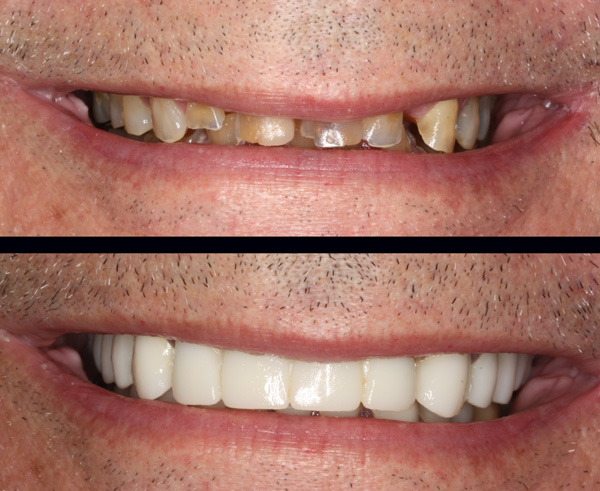 OK, that’s it for now!  The case is off to the lab along with all the pertinent photos burned onto a CD.  Dad went home.  He called and told me my stepmother was flirting with him!  Everything feels great.  During his next visit, we’ll deliver the upper restorations and then finish prepping the lower arch.  At the third visit, we’ll deliver the lower arch restorations.