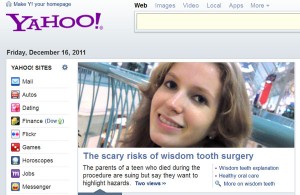 I’m home today with my daughter who has strep throat.  A few moments ago, my wife (on her way out to work) told me that there was a headline on Yahoo.com about someone dying from wisdom tooth surgery.  Oh boy.  Here we go (again).  More bad press for dentistry.

The story is actually by ABC News.  And, it describes a case of a 17 year old girl dying of complications during 3rd molar surgery.  Hypoxia was ruled as the cause of death.  The family is suing the oral surgeon and the anesthesiologist.  I thought it was interesting that an oral surgeon was employing an anesthesiologist in his private office.  Most of the surgeons I know perform conscious IV sedation themselves.  At any rate, the details are missing from the story, as I would expect from the media. 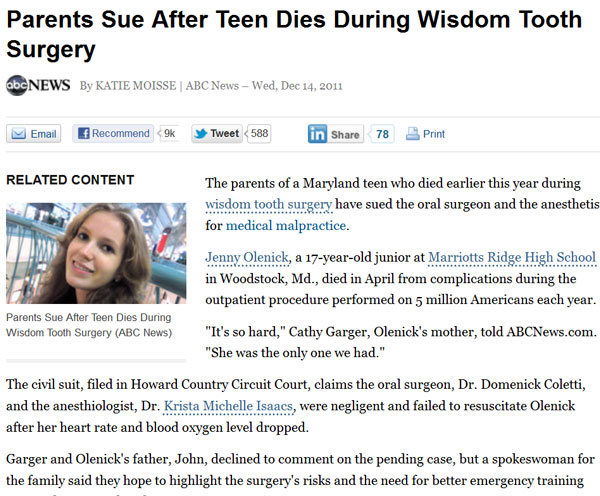 Click on the image to read the story online.

The article goes on to contrast the differences in opinions on prophylactic 3rd molar removal.  It pits the American Association of Oral and Maxillofacial Surgeons against the American Public Health Association.  And, of course, the article brings up the financial incentives for performing 3rd molar surgery.  Yes, of course… it’s all about the money.  🙁  Billions of dollars.

That said.. personally, I don’t agree with routine prophylactic removal of impacted third molars.  Each case should be examined on an individual basis considering many factors.  But, with a complete absence of pathology, I’ll usually recommend watchful waiting (with periodic panoramic films).  No doubt, in my nearly 25 years of practice, I have found some “aardvarks.”  Pathology DOES happen.  And at the first sign of it, we SHOULD act. 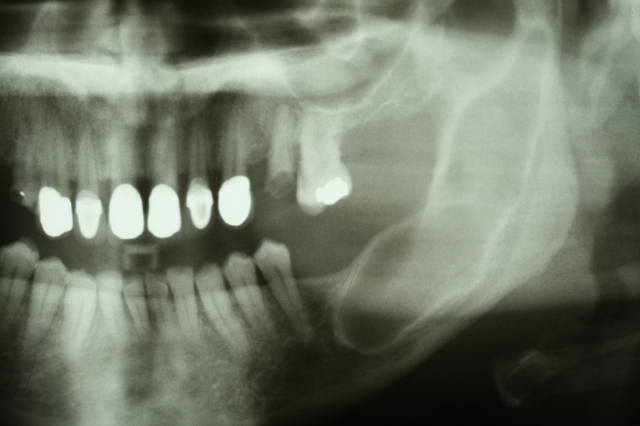 Pathology DOES happen! Click image to link to article.

I couldn’t help wonder the source of this gem from the article:  “Wisdom teeth are thought to have evolved for catching, killing and eating uncooked prey, which would make them obsolete now.”

Really?  I must have slept through that lecture in dental school.  But, I think if my 3rd molars (waaaaaay in the back of my mouth) had managed to latch onto some “uncooked prey,” I’ve already caught the poor critter with either my HANDS or perhaps even my front teeth (canines) like would a saber-toothed cat.  Silly!

Certainly, any death from medical or dental complications is tragic.  And, I cannot imagine the grief of the parents.  Unbearable.  If I’m to assume the article’s statistics are correct (11,000 cases of complications out of 5 million patients), it comes to 0.2% morbidity.  While I don’t know the details of what happened in this case, it sounds like something went seriously wrong.  And, it’s entirely possible it was due to negligence.  I just don’t know.

Just 2 weeks ago, I had a LONG drawn-out conversation with a patient about possible complications of extraction, including paresthesia.  She and her husband really got hung up on the possibility of paresthesia.  In this case, it was an erupted 3rd molar that was grossly decayed and painful.  But, the root tip was radiographically superimposed on the IAN.  I wasn’t too concerned about it.  But, the patient was concerned.  Of course, in this case, the alternative was to leave the infected tooth in place (and suffer THOSE consequences).  After much discussion, she agreed to go ahead.  The tooth was extracted uneventfully.

When I had an appendectomy last summer, I signed all sorts of informed consents.  And, that included that I could DIE from anesthesia.  But, the alternative wasn’t good, either.  I did end up with one complication… so eloquently illustrated here.  🙂

In 2000 – 2002, medical errors in hospitals leading to death AVERAGED 195,000!  Don’t think that didn’t concern me when I went in for my appendectomy.  I was VERY concerned.  I realized that I’m about 16 times as likely to be killed by a hospital as by a violent criminal with a gun.  I didn’t like those odds!  But, it is what it is.  Without the surgery, I’d be dead for sure.  Yeah… we need more “gun control” laws, eh?  Let’s address the REAL issues, OK, you nincompoops in Washington??

The DDSes actually do BETTER than the MDs

Oral Surgeons have a lower rate of complications from anesthesia and sedation than board-certified anesthesiologists.  As a matter of fact, anesthesiologists have a mortality rate THREE AND A HALF TIMES HIGHER than oral surgeons.

Be ready (for questions)!

The dental profession is a popular punching bag.  That’s not to say that we shouldn’t do everything possible to avoid tragedies like this case.  As a dentist AND a parent, I find it alarming and very sad.  But, as professionals, besides keeping our training and competence up to snuff, we must keep things in perspective.  A 0.2% rate of complications is amazingly low.

Whether it’s mercury poisoning, BPA poisoning, fluoride poisoning, cavitations from extractions, focal infections from root canals, x-rays, or whatever controversial topic seized upon by the media… we must be ready to calmly, rationally, and happily explain things to patients who ask questions.

PS… if you want to see sobering evidence of a DIRE need for public education about dentistry and dentists, read the comments after the ABC News article.  Epic ignorance!

Copyright protected by Digiprove © 2013 The Dental Warrior®
This entry was posted in Current Events, Editorial and tagged anesthesia, dental patient death, dental surgery complications, in the news. Bookmark the permalink.

5 Responses to ABC News – The Wisdom of Removing Wisdom Teeth