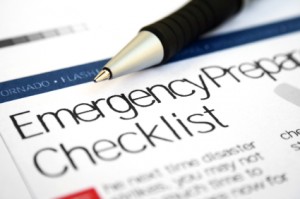 Emergency or disaster preparedness used to be dismissed as fodder for paranoid survivalists.   Today… not so much.   There’s even a new name for those who don’t fit the “survivalist” moniker but simply prepare for realistic emergency situations.  They call themselves “preppers.”  Cute, eh?

More recently, it has become more of a mainstream topic.  Most likely it’s because with news traveling around the world quite literally at the speed of Twitter and the “internetz,” we are acutely aware of every natural disaster and civil uprising in every nook and cranny of our planet.  From Japan’s recent earthquake and tsunami to the advancing civil unrest in the Middle East to the financial collapse in Greece, we can’t ignore that bad shit can happen… anywhere.

The CDC Flexes Its Comedic Muscle… Or?

Even our own government has begun to drop hints that Americans are responsible for their own well-being.  The government can’t be there to bail everyone out when the SHTF (shit hits the fan).  This was certainly evident during and after Hurricane Katrina’s hit on the Gulf Coast a few years ago.  In a previous blog post, I linked to the CDC’s blog about the Zombie Apocalypse.  Yep… the CDC actually uses that metaphorical phrase in it’s effort to recommend disaster preparedness.

NASA Is Worried About What? 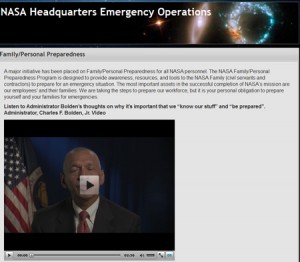 I recently discovered another curious “warning” issued by another government department – NASA.  Yeah… the space guys.  This short video features NASA Administrator Charles Bolden discussing “Family / Personal Preparedness.”  Administrator Bolden does make one odd statement in the video:  “We’re the only agency in the federal government that’s responsible for the safety and well-being of people, not only here on Earth, but off this planet.” Ummm… OFF THIS PLANET?  Reminds me of the movie, “Men in Black.”  Hmmmm.  Honestly, I’m not reading anything into it.  I assume he’s talking about our fine astronauts in orbit.  I think we can count on both hands the total number of people at the Space Station at any one time.  But, he didn’t say “astronauts.”  He referenced “people off this planet.” Just a strange way to put it.

And, while we’re on the “space theme,” you may or may not be aware of recent solar storms (gigantic solar flares).  If I recall what little I know about astrophysics, these solar storms run on about an 11-year cycle.  And, just a couple of weeks ago, we had a BIG one.  Here’s the British perspective on it.  Below is a video of it.  Wild stuff.  The real practical issue with solar flares is that they can knock out satellites, communications, electronic gear, and power grids.

Delving even more into the space theme, is the very real possibility of an asteroid strike.  There have been a few “near misses” recently.  Earlier this month, we had one about the size of a tennis court zoom by at about the distance of the moon. 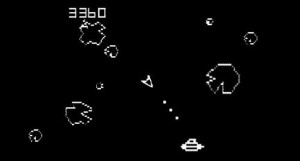 And, there’s another predicted this coming Monday.  Monday’s encounter with the 10-meter wide asteroid will be at about 7,500 miles from Earth.  That’s pretty close!  But, it’s nothing to worry about.  The point is that we do share space with these objects.  And, they have and will hit Earth.  It’s just a matter of when.

Don’t Worry.  Be Happy (and prepared).

Naturally, I go about my daily life without worries about the SHTF or asteroids smashing into Earth.  But, stuff can happen (like hurricanes and riots), and it makes sense to take reasonable and practical measures to be prepared for the inconveniences that come with disasters (like hurricanes, power outages, etc.).  I’ve been through a few hurricanes in the last several years.  And, it is a giant pain in the ass dealing with long lines at gas stations (if they are even open).  Supermarket shelves are bare.  Power is out.  Traffic lights aren’t working (if they are not blown away by 100+ mph winds).  They tell us to treat intersections without working lights like four-way stops.  Problem is that there are three lanes going in each direction with double left turn lanes.  So, that’s 20 cars arriving at slightly different times all at once!  How do you treat THAT as a four-way stop?  Instead, it becomes a game of automotive “chicken.”  The storm is the easy part.  It’s the aftermath that just sucks.

And, so on.  There are many online resources.  Here’s a checklist from FEMA.  Another one is from an unexpected source – The Mormons (LDS).  Apparently, preparedness is a very important part of their culture.  And, I’ve heard a lot of rave reviews about the LDS Preparedness Manual.  I have not looked at the 200-page document, yet.  But, here it is for your perusal.  Here’s another resource courtesy of our federal government:  www.ready.gov.  Use your Google-fu to find additional resources.

Even more important than being a Dental Warrior, is being a Family Warrior.  Your family depends on you to protect and care for them.  Take some easy steps to make your life easier in the event of a local or national emergency.

6 Responses to Asteroids, Hurricanes, Earthquakes, and Civil Unrest – OH MY!