The View Up There – Nobody Should Die From Colon Cancer

The basis for my provocative and seemingly bold title will become evident below.

Ever since my appendectomy six years ago, I’ve had gastro-intestinal distress (belly pain), to some degree, on and off.  I’ve been to the ER twice, with CT scans taken… both negative. 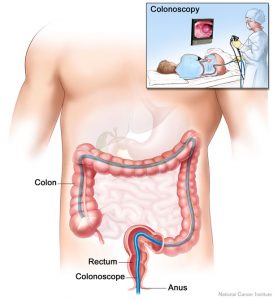 My doctor urged me to get a colonoscopy back when I was 48 years old.   The recommendation was a bit early (normally at age 50), since there is a family history of cancer.  For a lot of reasons (none of them good), I procrastinated…. and procrastinated.  And, I believe this is fairly typical.  It just doesn’t sound like fun, right?  I’m now 53 years old.  So, I’m about 5 years past due!

The most recent E.R. visit was this past December, while in Arizona for my son’s hockey tournament.  I was worried that something bad was imminent.  Nope.  Blood labs and CT were normal.  The folks at the E.R. in Arizona said, “You need to get a colonoscopy back home.”

Get OUT of my belly! 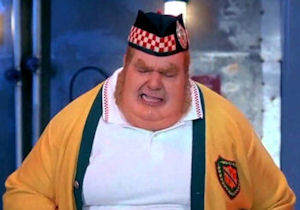 Going further back… Last October, my GI distress reached a point that put me in the doctor’s office on an urgent basis, in this case, the day before an out-of-state hockey tournament.  I was in a LOT of pain.  I was bloated and VERY tender in the lower abdomen.  He suspected diverticulitis and prescribed a regimen of two rather nasty antibiotics (Flagyl and Cipro).  This seemed to help.  He again urged me to get the colonoscopy.  I scheduled it and then canceled.  My excuse was my daughter’s chemo was about the same time, and she wasn’t feeling well.

Then last month, my belly started to talk to me again.  It wasn’t bad, but I wanted to nip it in the bud rather than wait until it got to the same point as last time.  I went back to my GI doc.  He palpated my belly, which wasn’t too tender this time, and then told me… “We’ve GOT to look around to see what’s going on, dumbass!”  OK…. He didn’t SAY, “dumbass.”   😉   My wife and office manager worked together to schedule my colonoscopy this time.  It was a go!

A flush beats a straight!

First, is the “prep” day.  If you’ve had a colonoscopy or know someone who has, then you’re probably somewhat familiar with this process.  It involves drinking some nasty shit… and the blowing it out the other end.  The process seemed to defy the Law of Conservation of Mass, as more seemed to come out of me than went in!  You spend the day and night at home in close proximity to the porcelain throne.  This stuff WORKS in cleaning you out.  In my case, it was two 16-ounce doses of “Suprep.”

The first dose (at 4 pm) was not too difficult to get down.

It tasted like concentrated sea water and cherry cough syrup.  I’m not a fan of drinking sea water, but I really hate cherry-flavored anything!  And, within an hour, the Inverted Mt. Vesuvius Effect begins.  The “eruptions” come fast and furious… over and over.

Six hours later (10 pm), I had to take the second 16-ounce dose.  This time it was much more difficult, as my body already knew how bad the taste was.  Every single gulp was followed by gagging.  My body was saying, “No way, dude.”  I choked down all but the last four ounces.  At that point, I knew I’d have it coming back UP if I drank any more.  And, I was “going clear” at this point anyway.  So, I stopped there.  Mind you… no food all day, either.  And, after 4pm, I could only drink water.

I finally went to bed at 2 am.  When I woke up at 6:30 am, the “Mt. Vesuvius Effect” was still in the “after shock” mode.  I was still rumbling… still going.  Finally, the gastro-intestinal “purges” settled down about an hour before I went to the out-patient center.

It’s a small world after all.

My appointment for the procedure was at 9:15 am.  They took me back to prep me at about 9:30.  The medical assistant recognized me.  “Dr. Mike!  It’s me!  Angie!”  Oh!  Hi, Angie!  I knew her (and her husband) back when I was single and living in the same apartment complex.  It had been 20 years since I had seen her.  After she left and closed the curtain, I got undressed and put the gown on and got back on the bed / gurney.  Shortly thereafter, a nurse started the IV and took my vitals.

About 20 minutes later, I was headed back to the O.R.  When I got there, the nurse ALSO recognized me!  “Dr. Mike!  You used to date my friend, Ann!”  Then I recognized Heather.  She was an old girlfriend’s best friend.  Also, some 20 years ago.  I remembered she was very nice back then.  But, I admit to being slightly self-conscious knowing that she was going to see me in “all my glory.”  Oh, well!  No time for modesty!  We had a nice chat. 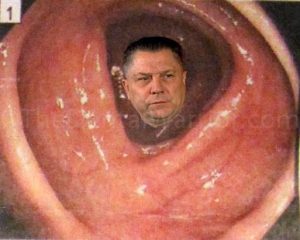 I also chatted with the anesthetist and my GI doc, as they got things ready.  I made the obligatory and clichéed jokes about finding Jimmy Hoffa up there and losing your Rolex.

The anesthetist asked, “Is this your first time?”

“Yep… Doctor H finally convinced me to do it.”

Dr. H then said, “Well… you’ve been in pain, so that’s a pretty good motivator, too.  Now we can get a look.”  And, then he very candidly said this:

“Nobody should die from colon cancer.  NOBODY.  But, if you come see me after you’ve lost 40 pounds, and you’re shitting blood, it’s not good.  If you don’t put it off, we can prevent it.”

I have to admit that, leading up to this moment, I was not particularly worried about the procedure or even the “prep.”  However, in the preceding years, months, and days I WAS stressing out over what I might hear in terms of the findings of the colonoscopy.  My mom had stomach cancer…. and then breast cancer…. and then bone cancer, which took her at age 62.  My paternal grandmother also had multiple bouts with cancer.  But, I also worried about diverticulitis, ulcerative colitis, and Crohn’s Disease, which can require surgery and even a colostomy.  Man, I did NOT want THAT.  I was worried… very worried.  But, it was time to find out.  It was time.

The Propofol stung like a “mofo” going into the vein on the dorsum of my right hand.  And, then it was “lights out!”

When I woke up, the doctor told me, “No cancer.  No diverticulitis.  Six polyps taken.”  I smiled.  And, then I faded back out for another little nap.  When I woke up again, they escorted me to the car with my wife at the wheel.  From there, we went directly to a favorite Tex-Mex restaurant.  Yummy!  I was hungry! 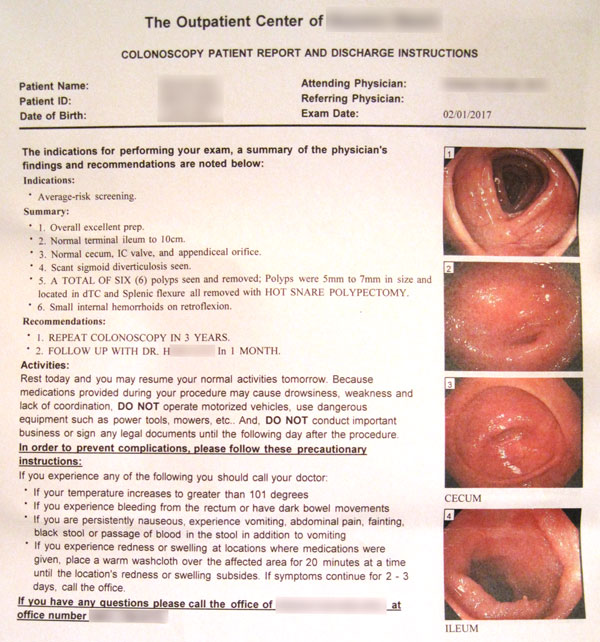 I had a follow-up with my GI doc a few weeks after the colonscopy (which is today, the day of publication).  I was tremendously relieved that nothing “bad” was found.  Even though I worried about the potential for “bad stuff,” I had a theory that stress is at least a factor in my GI symptoms.  No doubt, I’ve been stressed for a lot of reasons.

The good news is that it appears the cleanse effectively did what I’ll call a “GI reset.”  I’ve felt better ever since!

If you’re at “that age”… 50…. and you haven’t yet had a colonoscopy, PLEASE do it.  There really is nothing to it.  The “prep” is the worst part.  And, you get over that quickly.  Everything else is easy-peasy!  You take a nice nap, and the doctor goes where “no man has gone before.”  Ruling out bad stuff and nipping and clipping polyps “in the bud” is way better than what can happen farther down the road if you neglect it.

I’m reminded of a bit by comedian Ray Romano back in his stand-up days.  He talked about his first DRE (digital rectal exam) to check his prostate.  He said, “I’m afraid that it will hurt … and more afraid that it won’t.”  😆

A lot of procrastination is caused by fear of what we have imagined rather than reality.