Distracted Walking (by cell phone) as Dangerous as Driving! 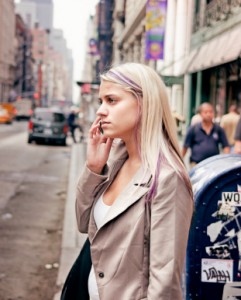 This morning, there was a segment on NBC’s “Today Show” about violent cell phone robberies.  The crux of the “investigative report” was that cell phone companies refuse to “blacklist” stolen cell phones.  That means that a cell phone that has been stolen can be re-used with a new number and service account.  Naturally, this creates a black market for these stolen phones, AND the cell service companies continue to make their money.

The Today Show segment featured a number of surveillance videos of violent encounters related to cell phone robberies.  Some of the victims were beaten quite badly (including potentially deadly kicks to the head).  Below is the Today Show video segment (if it’s not working, click here to go directly to the Today Show page).

While I understand the concern over the cell service companies’ refusal to make stolen cell phones less “attractive” to social miscreants, I couldn’t help noticing something else.  In the videos of the violent assaults, every single victim was in “Condition White.”  They were all engrossed in conversations on their phones, oblivious to the world around them.

Hang up and drive! 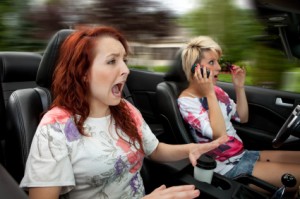 I believe folks who use cell phones in ANY capacity while driving are a menace to the safety of others.  They are worse than drunk drivers (and ubiquitous on the roads), and that’s coming from someone whose step-brother was murdered by a drunk driver.  My most vivid fear for my family’s safety is a cell phone talker running a red light or stop sign and plowing into them.

I personally will NOT use a cell phone (not even hands-free) while driving… PERIOD.  And, I contend that anyone who walks around on foot while talking on a cell phone is simply “EASY PICKINGS” for bad guys.  Those cell phone talkers are in “Condition White.”  They are unaware of the bad guy in PLAIN SIGHT about to attack them.

Hang up and walk!

I can’t disagree with the idea of stolen phones being rendered a useless brick of plastic by preventing reactivation with a new account.  It’s an easy and logical proposition.  However, I do disagree with the implied notion that people are not responsible for their own safety.  I don’t believe the cell phone companies are any more responsible for client’s safety from criminals any more than Rolex should be for those attacked over their expensive watches.

Your safety is YOUR responsibility and nobody else’s!  WAKE UP!  There’s a whole world around you, and unfortunately, it includes some lazy bad guys who will victimize the weak zebra who is not paying attention while drinking at the water hole.

Situational Awareness could have prevented every one of the attacks shown in the video.  Those victims didn’t see it coming because they voluntarily blindfolded themselves.

Copyright protected by Digiprove © 2013 The Dental Warrior®
This entry was posted in Personal Security & Safety and tagged crime, crime prevention, self-defense, situational awareness. Bookmark the permalink.
All original content on these pages is fingerprinted and certified by Digiprove