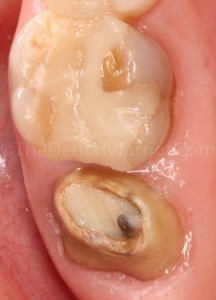 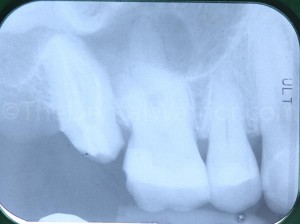 Today’s challenge was a tooth #2 belonging to my former hygienist.  An all-ceramic crown fractured in half and debonded.  It had been endodontically treated before.  The tooth was under-prepped occlusally and over-prepped  and over-tapered axially, particularly on the distal.  The existing prep had very little retention and resistance form…. really NONE.  I couldn’t re-prep it as it was.  I needed to recreate some of the lost tooth structure.

Three different views of the prep as it presented pre-operatively.  Note the over-prepped axial surfaces.

So, I roughened / freshened the axial walls by “dusting” it with a diamond bur and removed a millimeter or two of the core build-up on the occlusal.  I couldn’t get a metal Tofflemire band to engage the tooth.  There was nothing for it to “grab,” as the tooth was turned into a “teepee” by the previous dentist.  The band would just slip off as it was tightened.  Then I found some old crown core forms in the back closet.  They were made by Pentron.  But, they’ve been discontinued!  Editing to add:  I found a similar product from EDS.  Scroll down this EDS webpage page to see the product.  But, the webpage lacks a “BUY” button for the core forms.  Give them a call to order it.

I etched and bonded with Scotchbond universal.  I warmed up some Filtek Bulk composite in hot water and filled both the endo access in the tooth and the crown core-former.  Then I “smashed” the composite-filled former over the tooth and used an explorer to remove the extruded excess.  Then cured from all sides with a Valo curing light. 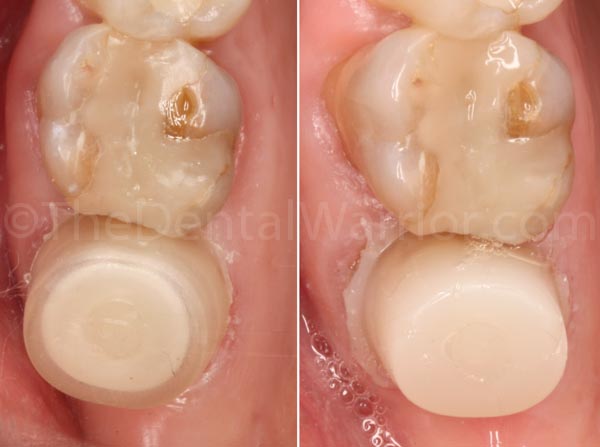 When I removed the core-former, I was left with a grossly-overbuilt core.  But, at least now I could do what I wanted with it in terms of trying to recreate a prep with better axial parallelism.

I re-prepped the tooth for a new gold crown (instead of ceramic) for two reasons.  First, it was opposing a gold crown (#31).  Secondly, I could keep the prep more conservative.  After prepping, I cured the build-up again with the Valo light. 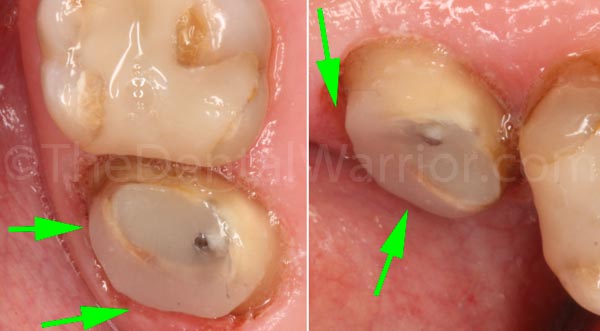 After prepping, you can see where the composite built up the axial areas that had been previously over-prepped.

Due to the angulation of the teeth, it was hard to visualize if I had enough occlusal reduction.  So, I made a Blu-Mousse bite registration and used a caliper to indirectly measure and confirm adequate clearance. 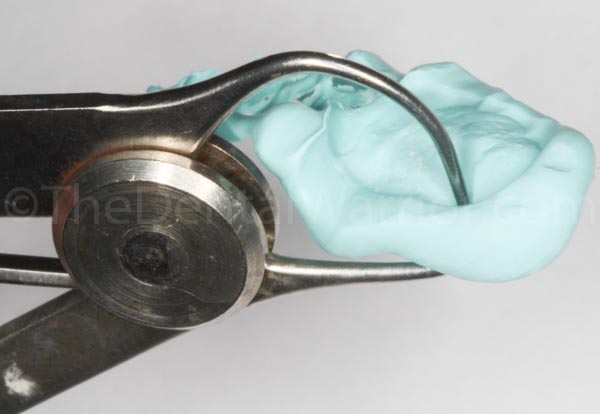 After I was satisfied with the prep on #2, I used a fine diamond to smooth and square up the distal proximal and marginal ridge of #3.  Yeah… that tooth needs a crown, too.

After prepping, we took a final Impregum impression (diode laser retraction) and then an alginate to help me make the temporary (since I didn’t have the original crown to make a pre-op impression.  After the alginate impression was made, I took a #8 slow-speed round bur and carved out the alginate to make a negative of the temp crown.  Then I used Luxatemp and seated it in the mouth.  I had to use a bit of flowable to fill in some blanks and then high-speed flame diamond to free-hand carve it to look somewhat like a tooth. 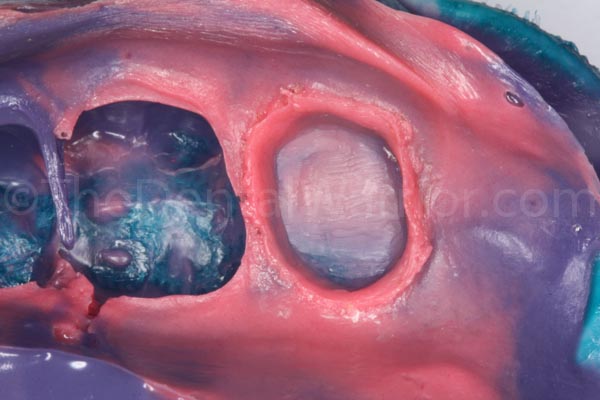 I considered adding a retentive groove or two to the prep, but the fit of the temp restoration confirmed that I had decent retention and resistance form. 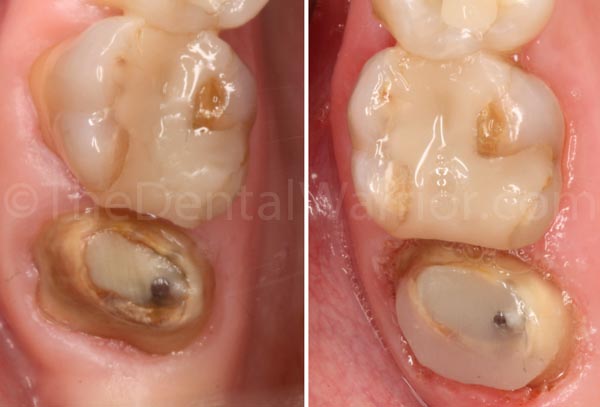 Before (left) and after (right). Apologies for the slightly different angles of view.

Before and after radiographs. Green arrow to point out the built-up distal axial wall.

While the occlusal reduction appears excessive in the clinical photos and the final x-ray, I can tell you that (by measuring the bite registration), it was only 1 – 1.5 mm.  Due to some likely super-eruption of #31, and a steep curve of Spee, there was very little room inter-occlusally.

And, that’s the end of today’s story!

12 Responses to Fixing an Overprepped Tooth