A Family That Shoots Together, Shoots Tight Groups Together!

I’ve taken my family shooting several times over the years.  My wife and son can “take it or leave it.”  They’re content with one or two trips to the range per year to confirm their competency.  And, they are competent shooters, to be sure.

My daughter, on the other hand, has grown to like shooting and trips to the range.  She first shot a gun (.22LR rifle) at age 10.  The next time was a year later.  And, the third time may have been another year after the second.  Two years ago, on the day she got her last chemo treatment, she asked if we could go to the range. 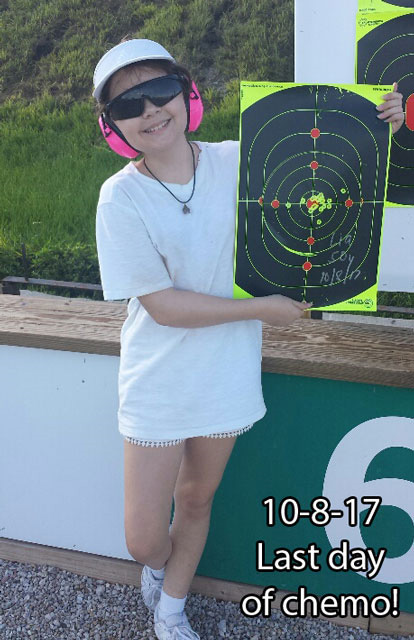 On the day I took her to the 100-yard range (one year ago), I started her with her Ruger American Rimfire (.22LR) rifle.  Then it was time for her to try my precision-built AR-15.  This was her very first shot!  She was hooked! 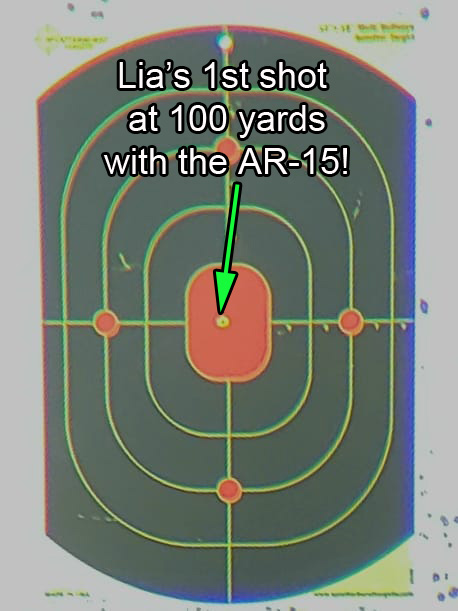 Mic drop moment! Image was taken through a spotting scope with my phone.

I think she was paying attention to my instructions! 😀  I had emphasized some of the principles of precision rifle marksmanship with her: 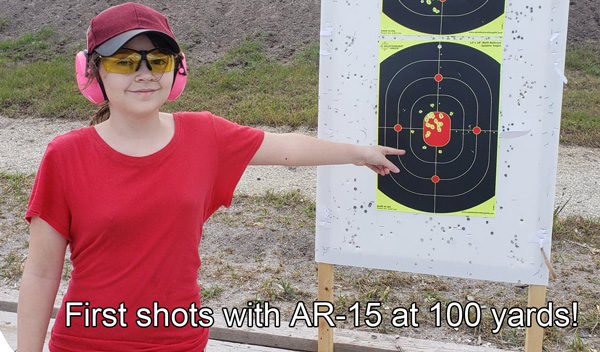 After a couple of more trips with the AR-15, it was time for her to try my Ruger Precision Rifle 6.5-Creedmoor at 100 yards.  This is a considerably larger caliber than the .223-cal of the AR-15.  But, the 6.5-Creedmoor cartridge and the design of the rifle make for a fairly mild recoil (“kick”).  I was confident she could handle it.

Here’s her first 5-shot group with the RPR 6.5 at 100 yards!  Sub-MOA!  That means all her shots were within an angular measurement of less than a “minute of angle,” or 1/60th of a degree.  Three out of the five shots went through the same hole! 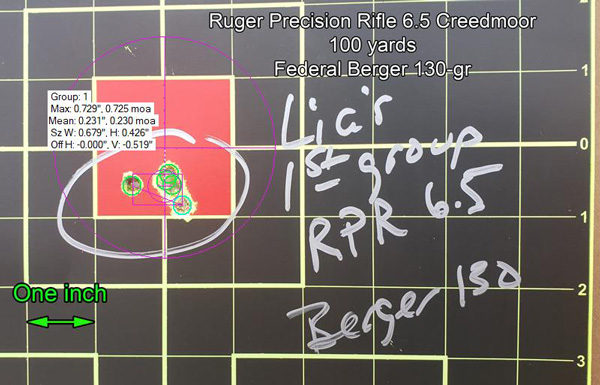 Time to take her out for longer distances.  200 yards was next. 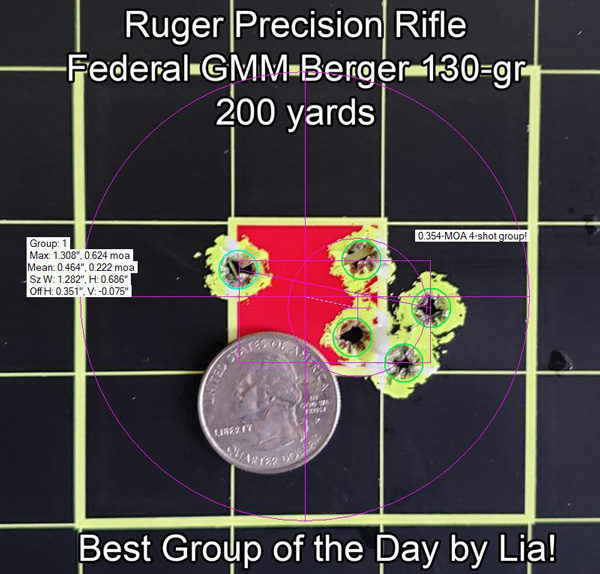 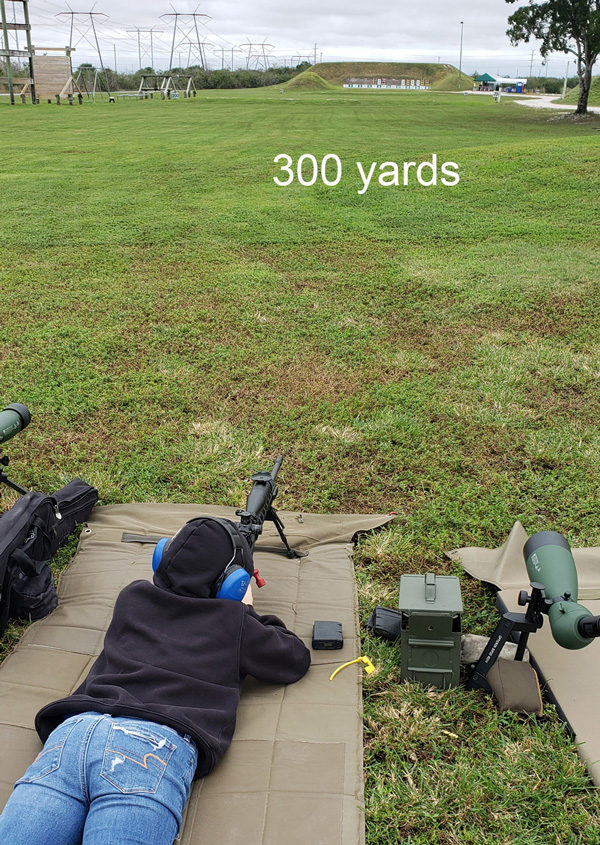 I coached her to take her time and remember the fundamentals.   I anxiously watched through the spotting scope as she prepared to take her first shot.  After about 30 seconds of getting settled behind the rifle, she broke the first shot… and DRILLED the bullseye.  I fell over laughing.  She gets it! 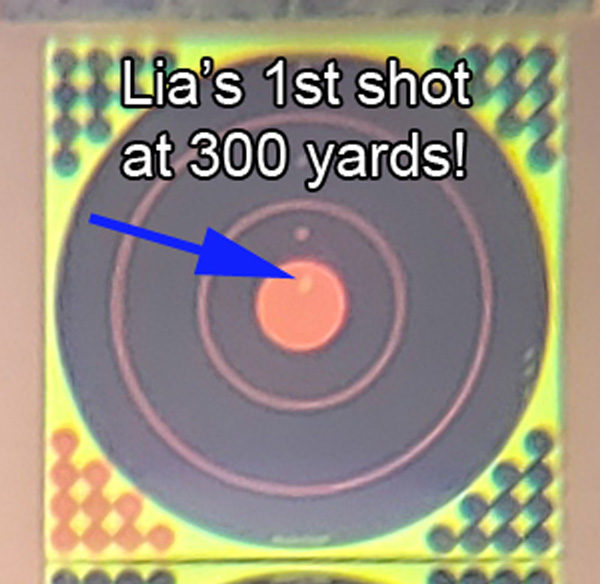 Image taken with my phone through the spotting scope, so it’s a bit fuzzy.

After we both recovered from laughing about her first shot, she took four more.  Here is that first 5-shot group at 300 yards. 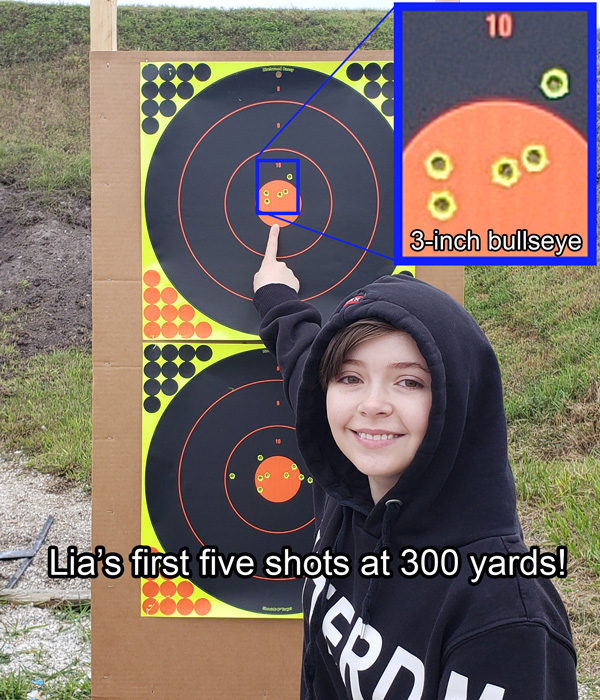 The bottom target was me getting the rifle’s zero dialed in.

The other shooters at the range were incredulous.  This was her FIRST time at this distance! 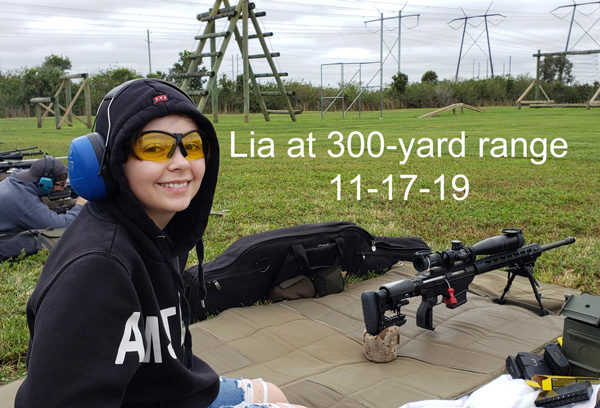 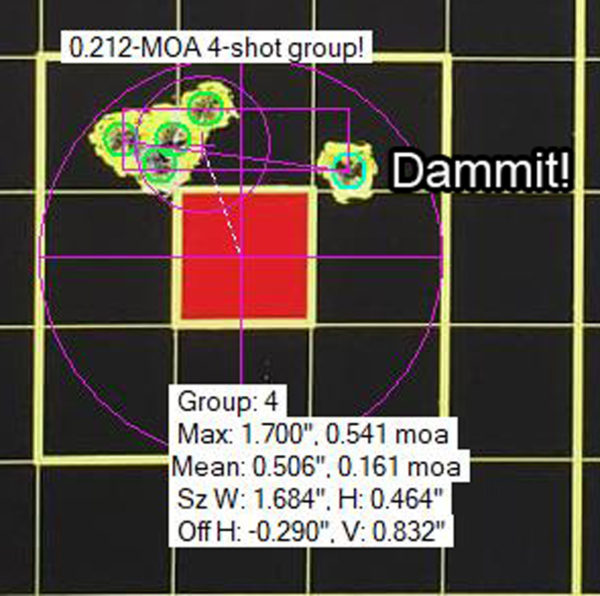 I had to show off a recent 300 yard group of my own. Probably my best ever!  Four shots touching and that pesky fifth shot that strayed a tiny bit.

OK… it had become apparent she’s got some serious talent!  Next, I took her to a 600-yard competition.  It was a 2-hour drive away.

I made this photoshopped montage to give some perspective of what 600 yards looks like relative to the target size. 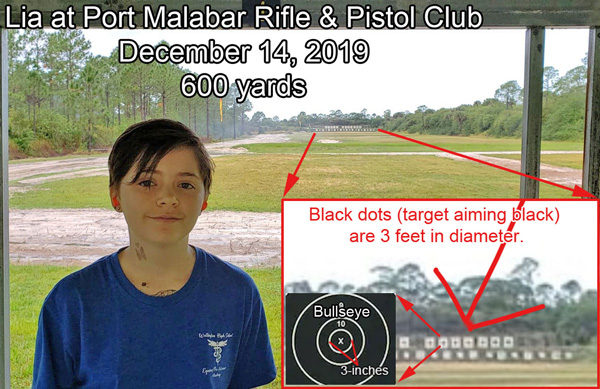 Normally, they pair up shooters and shoot in 2 “relays.”  One shooter shoots, and the other keeps score.  Then the 2nd shooter takes his turn while the first guy keeps score.  Each relay is 22 minutes (2 sighters and 20 shots for score).  Rinse and repeat for 3 targets. 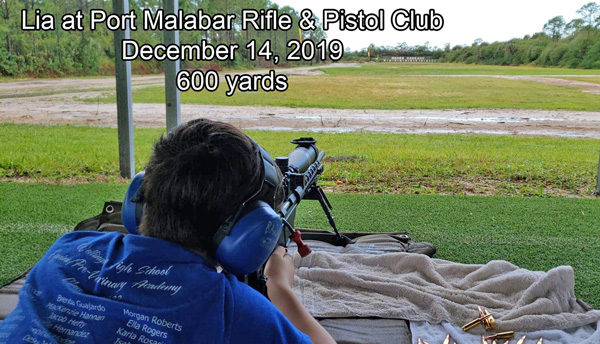 But, the weather was looking iffy, and there weren’t many shooters.  So, they ran ONE relay (single shooters) to expedite the event.  Since Lia and I were sharing a rifle, that meant we were in the same relay (the only pair) and had HALF the time, assuming we split it evenly – which of course, we didn’t.  I hurried even more, so she could have more time.  We had to get our 44 shots in within 22 minutes. 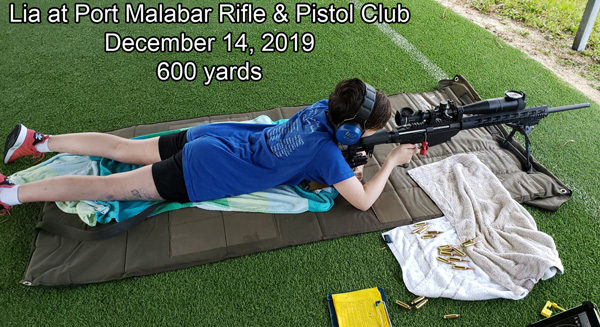 Needless to say, we were RUSHED.  And, the barrel never got to cool down.

I went first, to get the rifle / scope dialed in and set up for Lia.  We had a full value wind from the left at about 8 – 10 mph.  I got my 22 shots in.  Then Lia jumped on the rifle.  At shot #12, the rain hit HARD.  Downpour!  The match director called a cease fire and ordered us to (urgently) drive down to the targets and take them down.  We got SOAKED.  I mean like jumped-into-a-pool soaked.

We waited for the rain to pass, which didn’t take too long (maybe 20 minutes).  Then back to the target pit to put the targets back up.  Wind was now almost dead calm.

Lia would be allowed to finish her 1st target, but it would be under the new clock started for Round 2!  Crap.  So, she got her last 8 shots off for Target #1.  Then I jumped on and shot my Target #2.  Then she jumped back on for her Target #2 . All in 22 minutes!  Oy! I was shooting so fast, I didn’t look to see my impacts most of the time.  So, I wasn’t making any corrections. 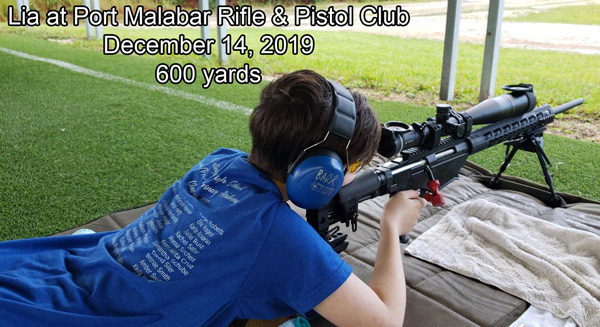 Needless to say…  Neither of us shot our best.  BUT!  We did pretty darned good considering the situation.  And, Lia kicked butt, considering the situation AND it was her first time ever at 600 yards.  Also, keep in mind that we’re shooting “F-class targets,” where the x-ring is 3 inches (1/2-MOA), and the 10-ring is 6 inches (see photo further down).

Here’s the kicker!  I beat Lia only by 2 points!  Effectively, a TIE!  Here are our score cards: 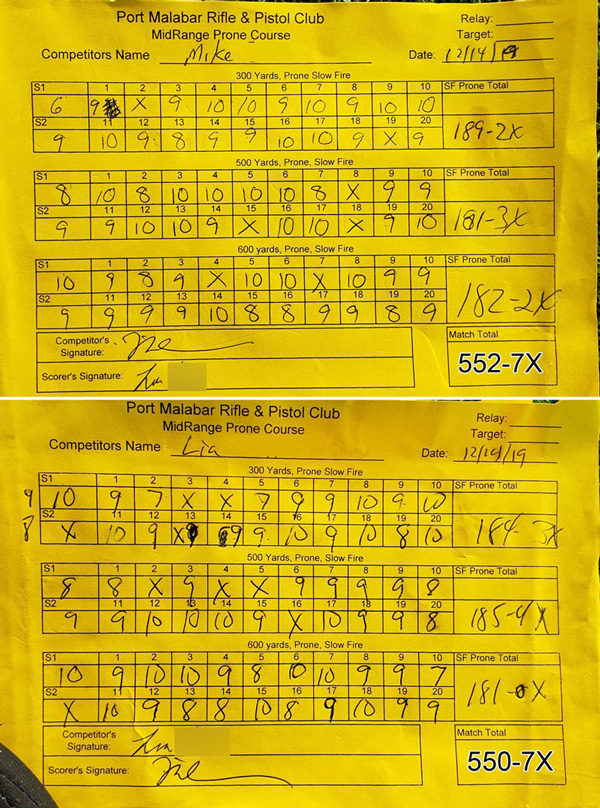 OK… some targets.  This range uses electronic scoring of the target.  There is a paper target mounted with sensors at the four corners.  The same paper target is used for the entire match. 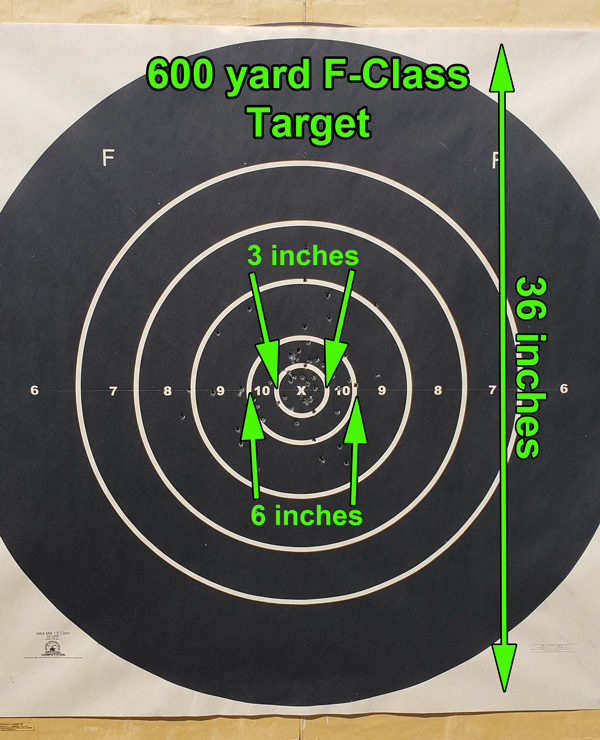 This is the 600 yard F-class paper target. The same paper target is used for all 3 stages of the match. For each stage, the electronic scoring is reset.

The images are screenshots from the iPad tablet connected to the electronic scoring system.  I attached the paper score card at the bottom of each target image.

Here are the first 12 shots on Lia’s target, before the downpour of rain.  I forgot to get a screenshot of her last 8 shots.  Note that her 2 sighters (labeled S1 and S2), indicated by the green arrows I added to the image, were a “10” and an “X!”  Nice way to start! 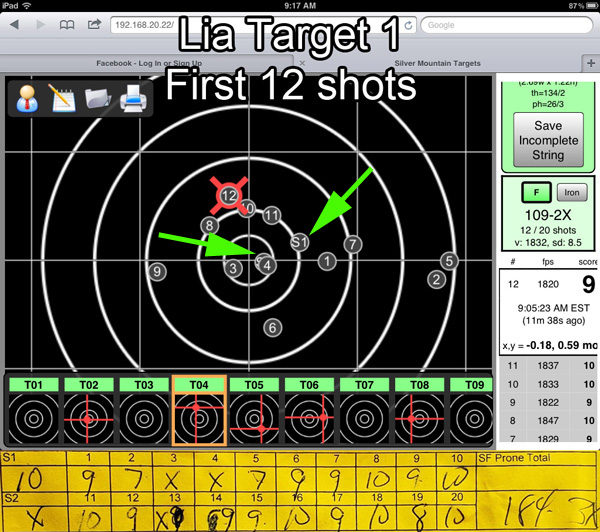 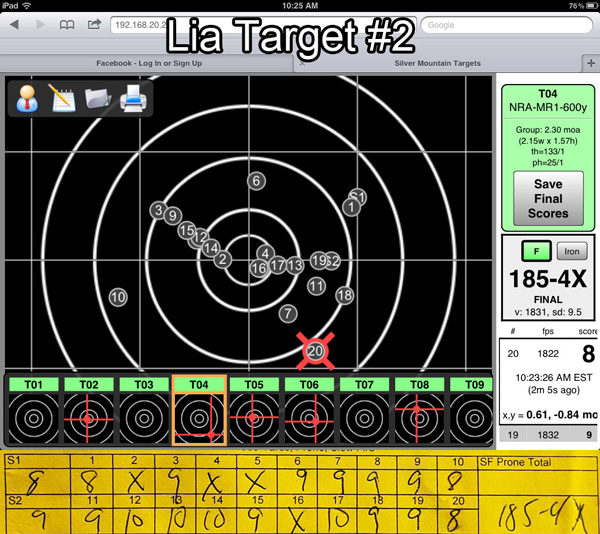 Lia was definitely fading on her 3rd target.  She was tired and had enough at this point. 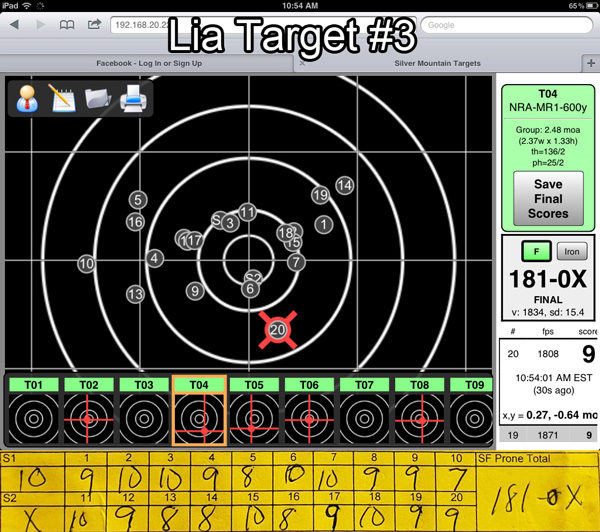 OK… My targets… not particularly proud.  I’ve shot better.  But, not bad considering the conditions. 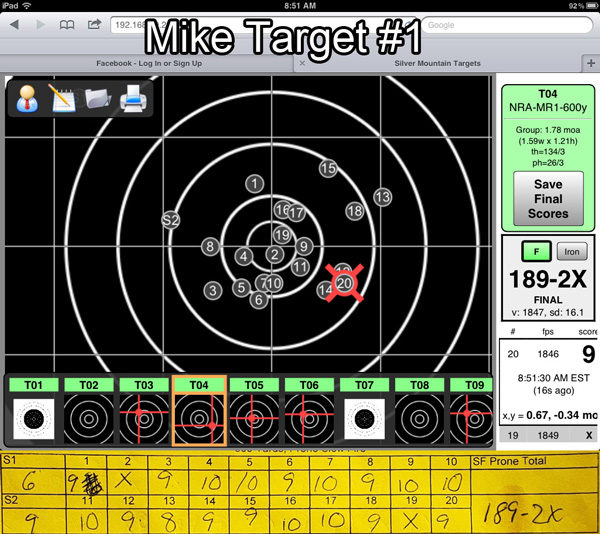 Since I was so rushed, I forgot to re-orient the ipad in “Portrait” mode for the screen shots.  So, I cut off the bottom of target #2 a bit.  Sucks, and annoys the “OCD” in me!  Oh well…  FWIW… 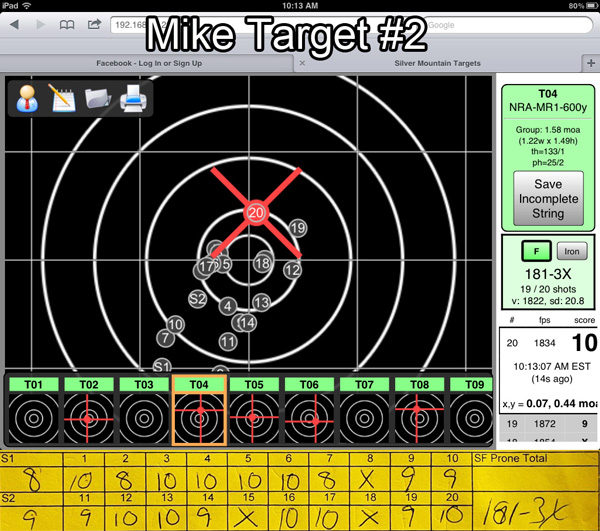 By the third stage, I was really hurrying, so Lia could have some time to shoot her last target.  I wasn’t even looking at my impacts between shots.  I just cycled the bolt and kept shooting.  Actually a decent group, just offset low and left from the bullseye. 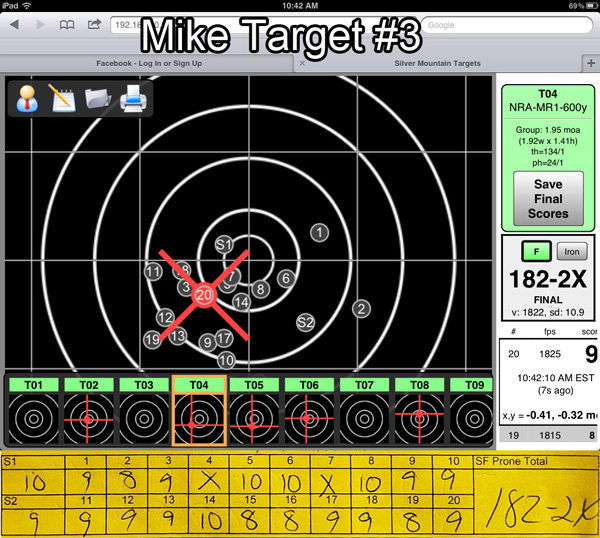 Zoomed in on the cluster on my last target: 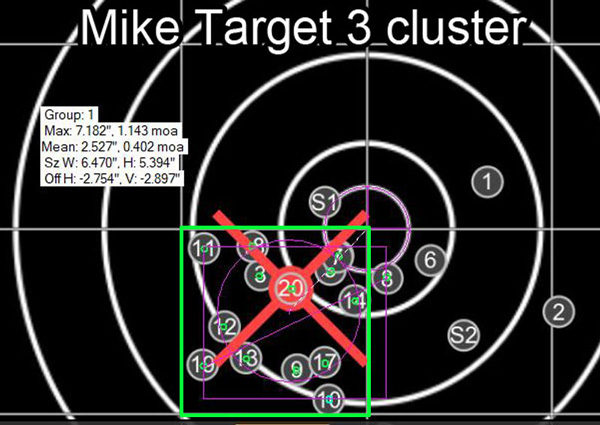 14 of my shots (out of 20) grouped up nicely, though offset from the bullseye.  The green box outline of the grid is 1-MOA (one minute of angle).  I never looked up to see my impacts to make corrections… so I could give Lia more time for her target.

In the end, we had a great time, despite the time crunch.  I’m sure with normal relay time allowances, we both could have performed better.  But, I’m SO proud of my girl!  She did fantastic!  I think she has a lot of potential as a competitive shooter.  We’ll see where it leads.  In any case, the best part is time spent with her… Daddy / daughter time.  The best! 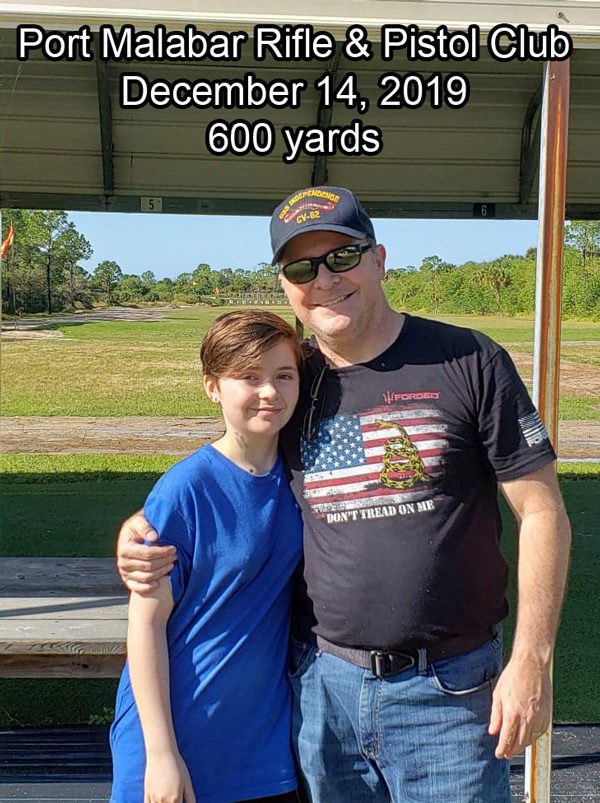 I keep an archive of my range trips with the 2nd Amendment Firearms Database.  ←Click the link to learn more!  It made it easy for me to reference my trips with Lia by using the Range Records “Find Shooter” filter. 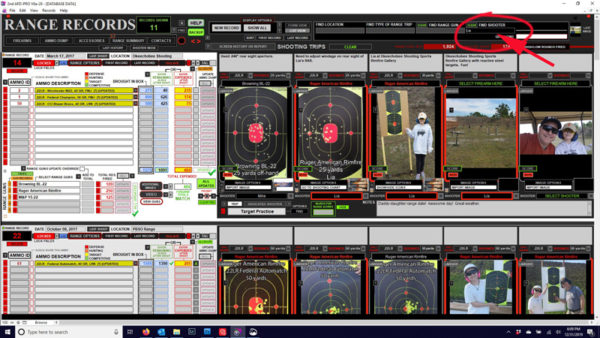 UPDATE:  My 18 y.o. son finally went to the range with me.  He’ll tell you, “It’s not really my thing.”  He goes maybe once every year or two.  This was his first time at 100 yards and his first time shooting anything bigger than a “22.” 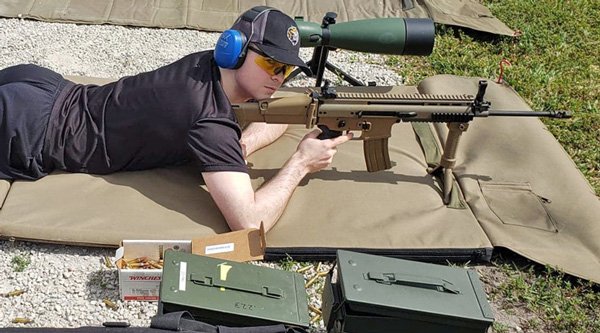 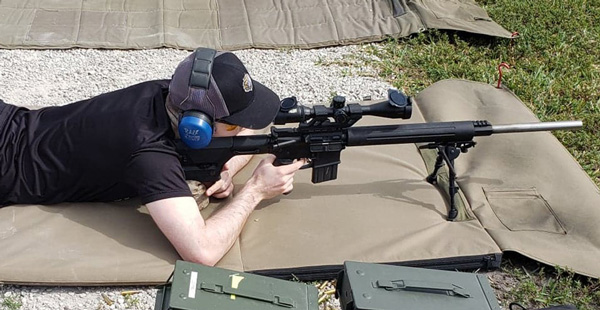 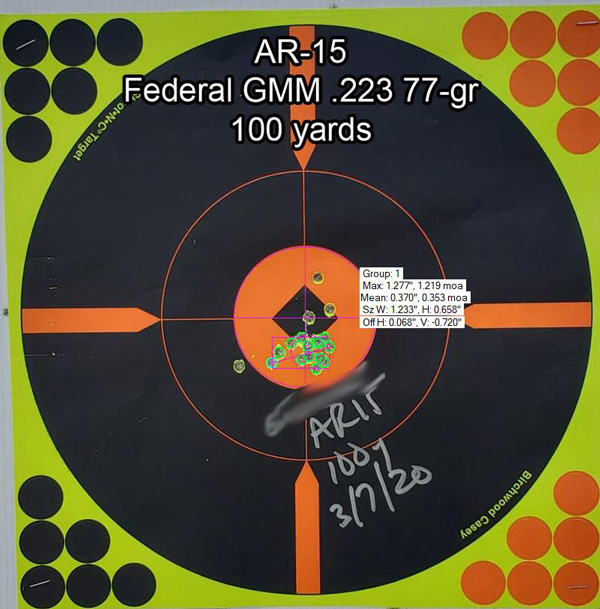 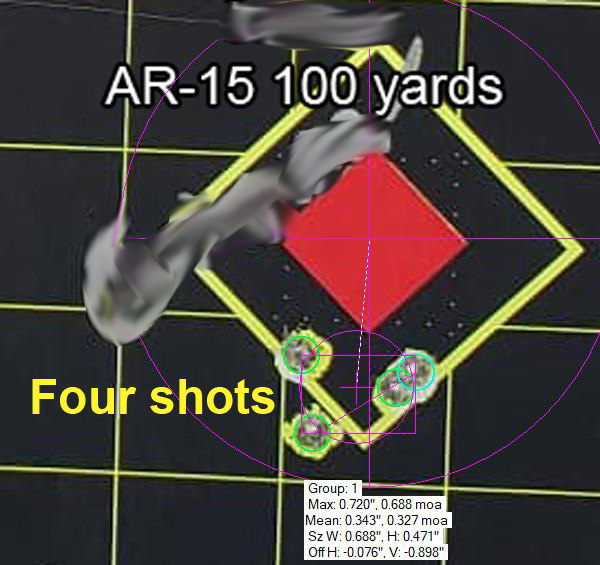 His best 5-shot group of the day. Better than mine!  Actually a 4-shot group.  The last round malfunctioned, and he thought he was out of ammo.   He made me blur his name out.  🙂

2 Responses to A Family That Shoots Together, Shoots Tight Groups Together!