A Defensive Gun Use That Hit “Close to Home” 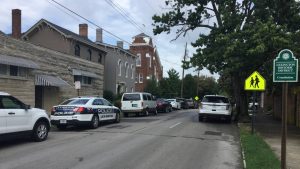 On Facebook, I created a page with a long-running series of posts that I call, “From the Files of It Never Happens.”  It was inspired by a quote from Shannon Watts, founder of “Moms Demand Action.”  (I can’t help giggling ala “Beavis and Butthead” when I hear the name of her anti-2nd Amendment organization.)  In an interview with CNN (June 7, 2014), Watts was asked about NRA president Wayne LaPierre’s contention that the only thing that stops a bad guy with a gun is a good guy with a gun.  Watt’s responded, “This has never happened. Data shows it doesn’t happen.”  To see the video of her interview, click on this link and skip ahead to 7:05 for the question and her answer.

Yeah… DGUs (defensive gun uses) “never happen” dozens of times a day and hundreds of thousands of times per year (as per multiple studies, including the CDC’s own reports).   I could easily post several news links per day with a Google search.  But, yeah… “This has never happened.”  There are NUMEROUS cases of mass shootings and attempted mass shootings in which an armed citizen stopped the threat.  Of course, the mainstream media will NEVER cover those stories.   To which “data” is she referring?  Her statement is audacious and laughable.

Until now, I had never known anyone, personally, who was involved in a DGU.

Earlier this week, I learned a friend’s son was unfortunately forced to defend his own life with lethal force (last Wednesday).  But, before I get to that story, I’ll tell the story of a personal experience that led to my first handgun purchase.  The relevance (connection between my story and his) will become evident later in this article.

Back around 1996, I was single and living alone in a nice apartment.  It was a walk-up design with the front door (and a garage) on the ground floor.  Upon entering the front door, you walk up a flight of stairs to the 2nd floor, where the living space is.  My bedroom was over the garage and front door. 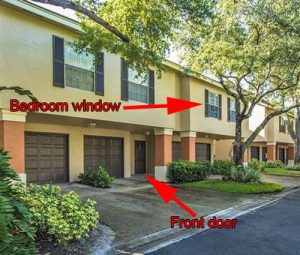 Photo of my apartment.

One day, at 4:00 am, I was sound asleep.  But, my “radar” was on, apparently.  I was suddenly awakened by the sound of my front door opening.  Holy crap!  Someone was in my apartment!   I could literally hear my heart pounding in my chest.  The hair on the back of my neck stood on end.  I bolted out of bed and grabbed the nearest improvised weapon I could find – a screwdriver, on my desk.   I slowly walked towards the bedroom doorway, trying to hear anything over my pounding heart, that would clue me in as to what was happening.  That was when I heard the front door close, the deadbolt click, and a KEY withdrawn from the lock!  Whoever it was, had a KEY!  But, for some reason, he was back outside (evident as I heard the key withdrawn from the lock).  I ran to my bedroom window (overlooking the front of my apartment) and saw the maintenance man driving away in a golf cart.  What the fuck?!?

I threw on some shorts and shoes and got in my car to hunt him down.  I found him very quickly, as he was getting out of his cart at another apartment.  He looked quite surprised to see me running towards him.  I admit that my adrenaline was flowing and I “got all up in his face” asking him why he entered my apartment.  Shaken up by my aggressiveness, he blurted out, “It was a mistake.  I went into the wrong apartment, so I left.”  I told him it surely was a mistake, and he could have been killed.

I went back to my apartment, still feeling the effects of the adrenaline dump.  I was shaky and freaked out.  No way I was going back to sleep.  At about 6 am, the apartment complex manager called me, as she had heard what happened.  I had a very frank conversation with her about the danger of maintenance staff entering apartments unannounced in the wee hours of the morning.  She said, “He likes to get an early start.”  I told her that he might be headed for an early grave, and her company would be liable.  As a result of the incident, the complex implemented a new policy.  No more MASTER KEYS for the maintenance staff.  They would have to check out the specific key to the specific apartment during regular business hours.

The police have NO DUTY to protect you. 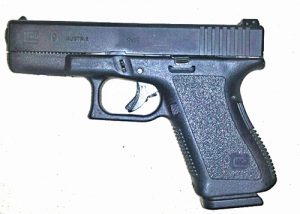 Within a week of the encounter, I bought my first defensive handgun, a Glock Model 19 (9-mm).   The incident woke me up, literally and figuratively.  I had never felt so defenseless.  I realized that, while this incident was SEEMINGLY innocent, it might not have been.  I also realized that in the very short time span of such encounters, the ONLY person that can save me… IS ME.  The police won’t be there in time, nor do the police have ANY DUTY to protect or save me.  I already had pistol experience (qualified Expert Pistol Shot in the U.S. Navy).  But, I signed up for a Concealed Carry course at a local gun shop anyway.  Thankfully, in the 24 years since, I’ve not been forced to defend my life.

It REALLY “never happened” to my friend’s son at 6 am.

Earlier this week, my friend sent me a private message.  His 21 year old son had shot a man fatally in his apartment on Wednesday morning.   Holy cow!  What happened??

Another resident of the complex, for several days, was accosting residents and threatening them.  His wife had just left him, and he was not taking it well.  He had also threatened my friend’s son (we’ll call him “Mark”).  He told Mark he was going to kill him.

Mark is an accomplished hunter.  His dad had given him a handgun and taught him how to be proficient with it.  Mark had been previously dismissive of his parents warnings about bad people out there. 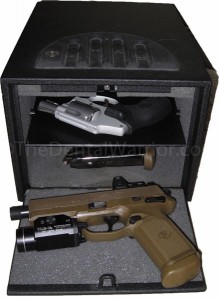 I highly recommend a quick-access gun safe like this one for storage of LOADED home defense guns.

Mark lives alone.  Given the credible threats, he decided to sleep with his loaded Glock 26 (a subcompact 9-mm) nearby.  At about 6 am, he was awakened by a commotion in the apartment next door.  He could hear the woman screaming, “Get out!”  The next thing he heard was his front door knob being turned and the door opening.  Mark quickly got up with his pistol in hand.  His apartment is a single room design.  So, he immediately saw the bad guy (the same disturbed resident who had threatened him with death).  It turns out the bad guy had already entered several apartments with the MASTER KEY he had stolen.

After entering Mark’s apartment with the master key, the bad guy closed the door AND TURNED THE DEADBOLT to lock it.  Ominous!  He wasn’t there on a social call.  Condition Red!  The proverbial shit has hit the fan.  Do or die.  The moment the bad guy turned his attention back to Mark, he said his last words, “Oh, you have a gun.”  Mark quickly and smartly sent a three-round string of fire, hitting the bad guy twice in the chest and once in the arm.  The bad guy went down right there.

The threat being over, Mark put his gun on the bed and called 911.  Mark was lucky on a couple of counts.  First, he had loaded the gun with FMJ (full metal jacket) ammo, which is NOT ideal for stopping a threat.  Hollow point (HP) is the proper defensive ammo.  It’s also safer.  Secondly, Mark later discovered that the pistol had a failure to eject (FTE) malfunction.  The gun “jammed.”  He would have had to clear the malfunction to make a fourth shot (not difficult, if you know how).  Luckily, three shots stopped the threat.

The local police came and investigated.  They interviewed Mark at the station for a few hours and determined that it was a case of lawful self-defense.  The bad guy, unfortunately, died at the hospital.  He had a history of problems, and it’s suspected he may have been under the influence of methamphetamine.

Guns (and the 2nd Amendment) save lives.

Mark is lucky to be alive.  He told his dad (my friend), “Thank you for giving me the gun.  You saved my life.”  Mark’s parents are thankful their son isn’t dead or beaten into a coma.  And, they are proud of him.