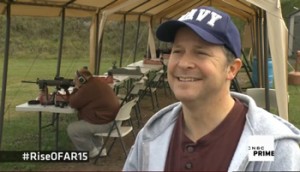 So, here’s my “post-op analysis” (for my dentoid friends) or my “AAR” ( aka “after action review” for the people of the gun) of my appearance in Thursday night’s airing of CNBC’s documentary, “America’s Gun – The Rise of the AR-15.”  Overall, I was pleased.  Actually, my expectations were exceeded.  In my conversations with the senior producer, Wally Griffith, he assured me that his goal was to have a balanced discussion and present all sides of the “debate” including both extremes and everything in between.  And, I found him to be believable.  And, as it turns out, he was being truthful.

Many have asked me how I got on the show.  Click on CNBC comes a knockin’.

Yet, I admit that I was also a bit skeptical, as many are, about the mainstream media’s selective bias against this particular Constitutional Right.  I even had doubts (briefly) about agreeing to appear in this documentary.  I’ve made an edited video of just my part of the documentary.  I spent about 8 hours total with the CNBC crew, which was distilled down to about 3 minutes in the hour-long program.  That’s actually pretty good!  See video after the jump…

I’ve been asked by many of you if I rehearsed my answers or prepared in any way.  The answer is no.  I didn’t get the questions in advance.  And, the journalist (who is a lawyer) hammered me cross-examination-style.  But, I’ve debated this subject countless times.  I was ready, because I know this topic cold.  I also know how to stay on point.  But, I noticed something funny in the video.  I wonder if you noticed it, too.  Look at my body language.  I was bouncing around a bit, almost like a boxer.  It wasn’t a conscious thing.  I just noticed it watching the video of myself.  I was bobbing and weaving as the questions came at me!   HA!  I have to admit I enjoy the debate, and I’m glad he didn’t lob up easy questions.

I will say the documentary leaned “left.”  I fully expected that to happen.  But, I think we “normal (pro-2nd Amendment) people” got better representation than on ANY previous broadcast on this subject.  I could go on about what I didn’t like in the show.  But, I am grateful to see that we DID get a “fair shake.”  A small part of me wondered if I should put myself “out there” in such a public way, on national television.  However… I’m not only glad I “represented”… I’m proud to have done my part. 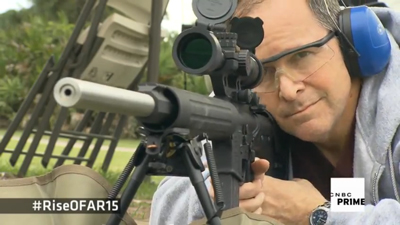 That’s Navy-speak for “What do I need to know?” or “What’s being said out there?”  After my appearance in Thursday night’s broadcast, I just had to use my Google-fu to find out what was being said in the gun forums and blogs across the internet.  All my friends on Facebook and Dentaltown were complimentary.  However, I wanted to see what strangers had to say… good OR bad.  I wanted to know what my fellow Americans thought.  Honestly, if I found any criticisms, I would post them here as well.  I wanted to know how I did in THEIR eyes.  After sifting through 12 pages of Google results, I present to you what I found:

“The program had a slight left leaning, but felt like they at least tried to be balanced. The dentist they interviewed seemed to be the most well spoken about people’s affinity for the AR platform.” – TNGunOwners.com 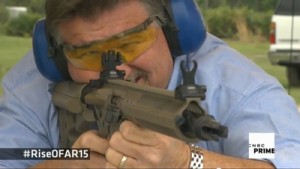 “This would have gone much better if they just interviewed the dentist for an hour.” – NortheastShooters.com

“Found myself watching this last night when the dentist was on.. I was sitting there pulling my hair out because the guy could have buried the communist interviewer very easily. I turned it off right after that.” – DailyPaul.com

“I guess I should be thankful that the segment with the dentist and real estate agent presented the side that the ‘typical’ AR-15 owners are professionals and not ‘anti-government tea-party’ types…” – VirginiaShootingSportsAssociation.blogspot.com

“Not sure if Sullivan was playing Devil’s Advocate with the dentist or not, but the doc’s analogy to a car is perfect… just because the car has racing stripes doesn’t make it go faster.” – MDShooters.com

“The dentist did a good job and represented gun owners positively.” – INGunOwners.com

“I was very pleased with the opening interview (with the dentist)… when asked “why do you need an AR” – his response was ‘why not’.  FINALLY!  I’ve been saying the same thing since the panic… I wish people would do the obvious ‘why not’ – there is no retort that will ever be relevant… and the dentist responded logically when the interviewer continued.” – CalGuns.net

“The dentist was level headed but the other folks of course try to make them out to be a bit over the top.” – M4Carbine.net

“Came across as if they were really “trying” to be balanced. Putting the dentist out front, and quoting FBI stats, explaining that there is in fact a difference between the military rifles and civilian rifles is all well and good.  But for the “pro” side, they gave disproportionate time to Yeager and not enough talking to regular folks.” – M4Carbine.net 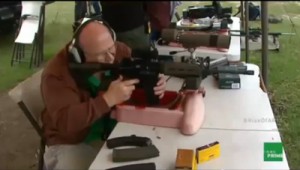 “It was less biased than I anticipated. Putting the dentist on there first dispelled the myth that all AR15 owners are nut jobs.” – 1911Forum.com

“Our saving grace was the AWESOME Lady who owns the women tactical training company along with the dentist and the real estate agent.  They showed what we really are, and they held themselves well among loaded questions.” – CalGuns.net

“The dentist represented us well.” – NJGunForums.com

“If you watched how the Dentist and Agent handled loaded questions, they answered very strategically.  YOU KNOW they feel the same way as everyone else.  However, they answered in a way that they could not be portrayed as ignorant people ‘with weapons of war.'” – CalGuns.net

“I like the race car stripes analogy.  Totally shut down the clueless propaganda artist, I mean reporter.  I wonder if the average viewer is smart to enough to get it.” – Youtube.com commenter

“Yes CNBC started the program off even-handed and interviewed one normal guy (a dentist) for like 45 seconds. Then the true intent of the show made itself clear by spending most of the air time interviewing people with clear signs of PTSD….  The audience instantly forgot about the dentist once they saw his this guy–who looks like a skinhead–and adopted the mental image that AR15 owners are all confrontational doomsday preppers bent on solving problems with violence.” – CalGuns.net

“I prefer to highlight the positives of the show:
– Started with dentist marksman
– Almost every range shot had more women than men in it
– No Feinstein
– Only quote from LaPierre was a good one
– Full explanation of evil features
– Woman shot in movie theater doesn’t support gun ban
– Again. More women shooters
– Repeated reminder the rifle just looks badass
– How many are in public now.” – NJGunForums.com

“Sure it was slanted toward the anti’s. But at least they made a small effort to show a couple of “normal” people (Dentist & Female shooting League).” – CalGuns.net

“If 50% of gun owners acted like that (James Yeager) they’d lock us in an institution.  We need to put the dentist guy and the instructor lady on a pedestal….” – AR15.com

“Yes,…..the reporter was trying to push the dentist into a lot of statements.” – GlockTalk.com

“Most owners are like the dentist. Rational, normal, law abiding citizens.” – TheHighRoad.org

“I love how they interviewed that dentist. Showed that not every AR-15 owner is a retarded hillbilly… lots of good points made despite the reporter taking the typical devils advocate stance.” – MossbergOwners.com

I also got this email:

I wanted to express my sincere appreciation for your representation of responsible gun owners in this country with your appearance on CNBC’s special “The Rise of The AR-15”.  Producers made a very wise choice in their selection and I will be writing to thank them as well.

With the added scrutiny the tragedies in this country have brought on gun owners and gun legislation, it is important for those who wish to impede on our 2nd amendment right to realize that a person, such as yourself is the true face of the vast majority of law abiding gun owners in this great nation.

Again, thank you for your great representation and best wishes to you and your family.

The journalist summarizes what he learned.

I just found this post-production interview of the journalist, Brian Sullivan, who interviewed me.  I think he actually summed it up very fairly:

Here’s CNBC’s teaser or “trailer” video, titled “I Am a Typical AR-15 Owner,” featuring yours truly.  Pretty much the same as my edited version at the top of this post.

Did you watch the 1-hour documentary special?  What did you think?  Chime in with your comments below!

UPDATE:  I found a copy of most of the show online.