When the media comes-a-knockin’, this dentist will be rockin’!

A couple of weeks ago, I got an interesting email.  It was from a producer at CNBC.  He wanted to know if I would be interested in appearing on a CNBC special about the AR-15.

Here’s the story about how I was chosen to be on CNBC’s “AR-15 project.”

They decided to do a 1-hour special on the AR-15, since it’s the lightning rod of the “gun debate” and it’s the target for being banned.  CNBC wanted to present both sides, including featuring “normal” people who own AR-15s.

We need a dentist!

At the production meeting, they were discussing finding “normal” people who own AR-15s.  One producer said, “We need to find someone like…. a DENTIST.”  So, they Googled “AR-15 dentist.”  And, they found my blog article, “Why I Need an AR-15.”  The Senior Producer contacted me by email and asked if I’d be interested in being interviewed.  MOI?  Interested in being on TV??  Naaaaaaaaaaaaa!  Not my style!  😉  HA! 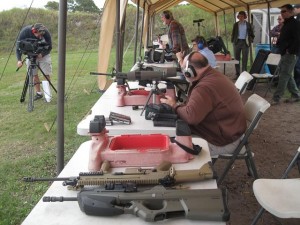 My friend, Mike, in the foreground. Camera crew is setting up their shots.

I had multiple conversations with the senior producer by email and phone.  I quipped that if they considered dentists as “normal people,” perhaps he had not met many dentists.  He asked me if I could recruit other AR-15 owners who were “normal” regular people.  As it happens, I knew a couple of my patients who did, and they were happy to participate.

So, the folks from CNBC flew down to Florida and spent some time shooting (video) me at my office being a dentist.  Then they came to my son’s hockey practice and shot video of me being a “hockey dad.”

On the 2nd day, we went to the range.  We spent about 5 hours at the range doing interviews and shooting video footage of us shooting our AR-15s.  It was exhausting!  I felt very similar to how I feel after a day of public speaking at a dental gig.

The crew members from CNBC were all very nice.  We had a good time hanging out together.  And, they seemed genuinely interested in learning about our rifles and what we had to say. 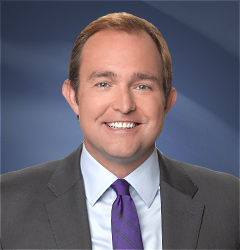 The reporter (CNBC’s Brian Sullivan) who interviewed us is a real pro.  And, he did not lob up softballs for us.  He hit us hard with hard questions… questions that represent what the antis are asking (but don’t seem to want to hear the answers).  Consider that Mr. Sullivan has a law degree, and it felt like a cross-examination.  I expected that, and I stood my ground with factual, unemotional counterpoints.  It was all off-the-cuff for me, of course.  I didn’t get the questions in advance.

I did get a case of “cotton mouth!”  But, I like thinking and speaking on my feet.  I think I did pretty well, and all those who observed told me I did.  My patients / friends also did very well.

At the end of the range session, I let the CNBC crew take turns firing one of my rifles.  And, as is always the case, every one of them had a grin after the experience.  Total rounds sent downrange (from my rifles):  260.

What will make the cut? 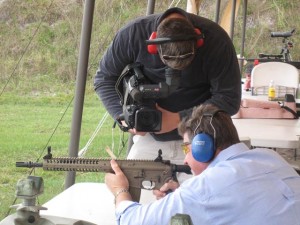 Cameraman getting very close to my friend and fellow shooter, Brett.

It will be very interesting to see what parts are edited out vs. what makes the final cut.  Overall, it was actually fun. It felt good to have the opportunity to present “our side” of the debate.  Ultimately, with their editorial prerogative, my efforts might be for naught.  But, if ANY part of what I did makes it through and has a positive effect….that’s a good thing.

While I really do believe that in this particular case, CNBC seems to be making a honest effort to present a balanced report, I am not clinging to the hope that this will be different.  I realize that the chances are much higher that it will be the typical MSM approach.  But, I could not resist the opportunity, and I’m willing to take the risk.  As passionate as I am about this topic, I felt it was my OBLIGATION to make the case for “our side.” 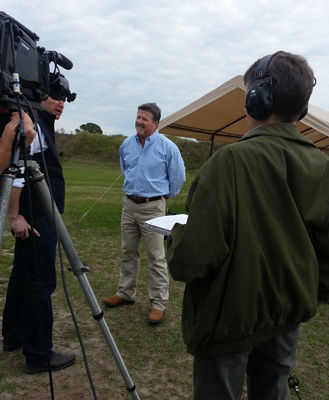 Brett being interviewed by Brian Sullivan

Obviously, I do not have ANY control over the final product.  They may edit out nearly all or all of what I said.  On the other hand, maybe they’ll leave in all the brilliant things I said.  It is what it is.  But, I went all out for by giving them access to my life for two days.  I put it “out there.”  I exposed myself when MANY of my fellow gun and 2A enthusiasts told me they’d NEVER talk in public (especially via the MSM) about their guns.  In my recruitment efforts I got some refusals.  I also got refusals from gun ranges who did not want the media on their property.  It says a lot about the general mistrust of the media these days.But, in the end, my tin foil hat is not so irretrievably screwed to my noggin.  I felt I HAD to do this.  I would have regretted not doing it.  This fight (for our rights… all of them) is SO important!  If we run and hide, it will NOT end well.  We MUST stand up and fight.  And, I surely would not be worth my salt when you consider how much energy I pour into this online… only to refuse to do it in front of the national camera eye.

I do understand the mistrust in the media.  They’ve earned it!  But, my blog has a very limited audience.  On Facebook, I’m limited to my “friends.”  If people like me aren’t willing to REALLY stand up and fight, I have to question their commitment to the cause.  So, when the MSM invites me (even though it may be a trap), I will bring the good fight to them.  I WILL fight, and I will fight WELL.  I am proud to do it.

This is a battle we MUST fight!

I took my role quite seriously, as I believe it is an issue of utmost importance.  It is, quite literally, an issue of life or death.  If there is one instinct that is universal among living things on this Earth, it is the survival instinct… self-defense.  The same people that would decry the de-clawing of domestic cats to save furniture, lamenting that it’s cruel and leaves the kitties unable to defend themselves, oddly and hypocritically will support disarming fellow humans.  They would prefer that you and I be rendered defenseless against the REAL criminals so they can feel “safe” from US… the law abiding citizens.  It makes no sense to me.  It defies the laws of nature.

Finally, there are millions and millions of gun owners, JUST LIKE ME, who have never committed a crime and never will.  The notion of punishing law abiding citizens as a way to “prevent” crime is simply a vacuous attempt at assuaging the fears of the people (while fanning those fears at the same time).  “We MUST do SOMETHING (even if it’s the wrong thing).”  I say NO.  We must do the RIGHT thing… always.  And, if that means waiting and doing nothing UNTIL we figure out the RIGHT thing, then so be it.

Thomas Jefferson said, “I would rather be exposed to the inconveniences attending too much liberty than those attending too small a degree of it.”

We must NOT infringe upon the freedoms of citizens in the delusional name of preventing criminals from perpetrating their evil deeds.

I got caught up in the moment and forgot to hand my camera to someone to take photos of me during the interview.  But, the range owner got the whole thing on video…. UNCUT video.  I’m working on getting a copy of that.

Stay tuned!  The producer told me the program will likely air around the middle of April.

PS… Brett, Mike, and I rode together to and from the range.  On the way home, Mike took a call from one of his coworkers who asked, “How did you get to be on CNBC?”  Mike replied, “Because my dentist is cool!”

UPDATE!   The program is scheduled to air on Thursday, April 25th at 10:00 PM Eastern Time.  Click here for more information, and take a look at the video trailer / teaser!

UPDATE #2!  The program aired!  Click here to read my “post-op” analysis and a video compilation of my appearance in the CNBC documentary.  Also now includes the full-length video.