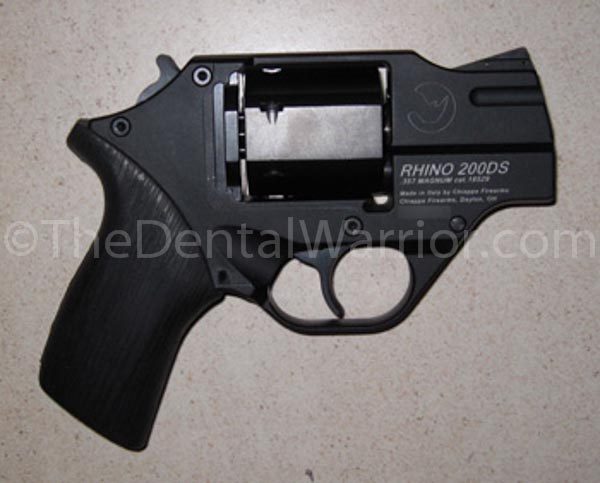 Bear in mind that I am NOT a professional gun reviewer.  And, this is really my first such endeavor.  Many of my readers have asked me to do some gun reviews.  So, here goes!

My wonderful, beautiful wife surprised the heck out of me this year.  She got me a revolver I’ve been drooling over (the advertisements in magazines).  I’ve always had a penchant for the oddball guns.  And, I’m a big fan of “form following function.”  The new “Rhino” from the Italian gun maker, Chiappa Firearms (pronounced “key-ah-pa”), falls squarely in the intersection of “oddball” and “form follows function.”

Immediately upon seeing just a photo of this .357-Magnum revolver, folks either love it or hate it.  Pejoratives such as:  ugly… “fugly”… hideous…. and even “Klingon-esque”… are among the comments on gun forum threads about the Rhino.  But, interspersed in the posts panning the gun are accolades such as:  awesome, gorgeous, cool, sweet, and even “bad-ass.”  One way or the other, the Rhino’s appearance seems to precipitate a primal reaction among gun enthusiasts.  In my book, when a company puts out a product that creates so much buzz, negative and positive, they’re on to something.

Revolvers were among the first “repeating” arms and still occupy a prominent place in the spectrum of handguns. 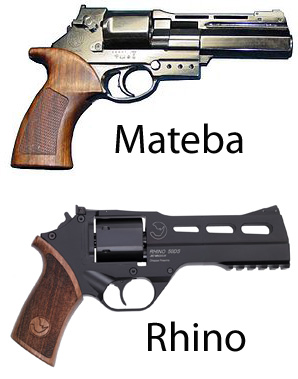 But, not much has changed in the world of revolvers since their inception.  They are a simple design that just works.  Until now.

The Chiappa Rhino revolver offers something new.  Revolvers have traditionally fired from the top chamber of the cylinder (12 o’clock).  The Rhino fires from the BOTTOM chamber of the cylinder (6 o’clock).  While it’s apparently not the first revolver to do this, it seems this may be the one that gains some market penetration in the U.S.  In 1997, Emilio Ghisoni created the Mateba Model 6 that fired from the bottom of the cylinder.  The late Mr. Ghisoni was also involved in the design of the Rhino.  The similarities in appearance are immediately evident.

That all started with the big bang! 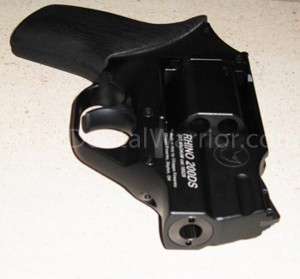 Low bore axis. The barrel is lined up with the BOTTOM of the cylinder.

OK, enough about the history and a little about the math and science.  Let’s touch on the “form follows function” aspect of this gun.  The reason to have the gun fire from the bottom of the the cylinder rather than the top is that it dramatically lowers the “bore axis.”  That is the barrel sits much lower in relation to your grip than a traditional revolver.  Now if you think back to your physics class, consider Newton’s 3rd Law of motion:  For every action there is an equal and opposite reaction.  That explains “recoil.”  Recoil is the gun’s “kick.”  And, when fired, every firearm has recoil.  The amount of recoil depends on a number of things including the size of the cartridge (bigger = more recoil) and the mass of the gun.  A heavier gun will absorb some of the recoil, whereas a lighter gun in the same caliber will transmit more of the recoil to the shooter’s body.

The positional relationship of a gun’s barrel to the shooter’s body will also affect how recoil is felt.  And, that’s where the bore axis of a handgun comes into play.  The Rhino’s lower bore axis has a much shorter “lever arm” in relation to the shooter’s wrist.  This directs the recoil straight back into the arm, rather than torquing the hand at the wrist as happens with a traditional handgun with a higher bore axis. 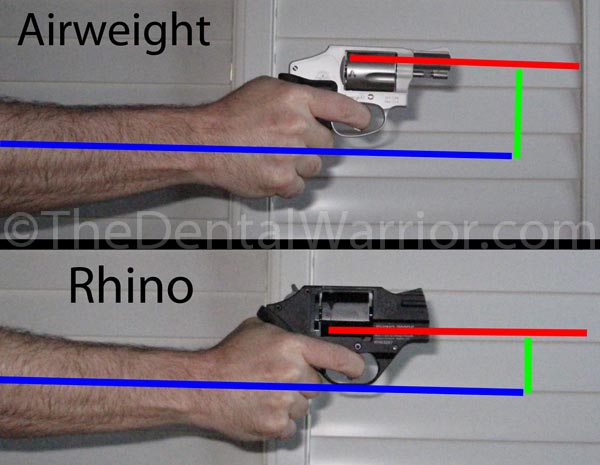 The lower bore axis (red) results in a shorter lever arm (green) in relation to the arm (red). Not a perfect illustration (I’m an amateur!), but I can tell you it makes a tremendous difference. Both revolvers in this photo were verified unloaded and pointed in a safe direction.

This may seem like a small or relatively insignificant difference, but I had read many reviews saying the concept is very effective.  Now I’ve experienced it for myself, and I can report that the difference is VERY noticeable. 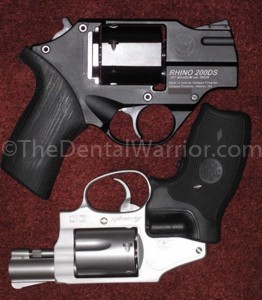 For comparison, I fired my wife’s Smith & Wesson 642 Airweight side-by-side with my new Rhino.  I fired the same .38-Special ammunition in both.  Granted, the snubnose Rhino weighs 9 ounces more than the S&W Airweight.  But, the tremendous contrast in felt recoil can’t possibly be accounted for by the weight differential alone.

Firing the S&W Airweight can be simply described as painful.  It is not a gun you’ll comfortably plink away with at the range.  It is intentionally designed as a lightweight and very concealable weapon of last resort.  And, it serves that purpose well.  Putting just 20 rounds through the Airweight was enough punishment.  You practice with it to be proficient.  But, it is not a gun you shoot for pleasure.  Most snubnose revolvers of any substantial caliber are not “fun guns.”

On the other hand, the Rhino was a delight.  Felt recoil and muzzle flip were negligible.  It was very comfortable.  The difference is truly amazing.  Rather than the muzzle flipping upward, the recoil is more of a PUSH, straight back into your arm… like a rifle pushes your shoulder.  Follow-up shots are quick and easy.  Accuracy at self-defense distances (5 – 7 yards) was especially good for a snubnose.  I put 150 rounds through the Rhino and could have kept going.  But, when three “giggly-girls” showed up in the booth next to me and horsed around while taking photos of each other, it was time for me to “skid-daddle.”  Shooting is fun, but I get nervous when “noobs” are “striking poses” with guns for photos (and no regard for others around them).  It was just as well and time to leave, since I noticed the Rhino’s action getting rather stiff.  Firing 150 rounds of dirty ammo left a lot of residue on the gun and will bind up the moving parts.  A good cleaning at home made everything smooth as silk again.

As for aiming the Rhino, I did find it to be different than my long-time companion Glocks.  For most of my pistols, I find “Sight Image 3” (see image below) to be the best way to aim them for target practice.  In my single range experience with the Rhino, I found that it is apparently designed to work like “Sight Image 1” below.  At self-defense distances, the only thing you’ll need to focus on is putting the front sight on the bad guy.

Sight Image 1 seemed to work best with the Rhino. 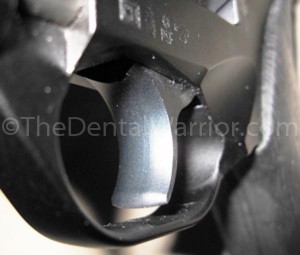 Other features of the Rhino include a noticeably wide trigger face, which I like.  The grip is a neoprene rubber, which also contributes to the comfort of firing this revolver.  Despite the unusual shape, the grip is very comfortable.  The Rhino comes with the medium size grip.  You can purchase a small or large size grip if needed.  Walnut and olive wood grips are also available for a more elegant look. 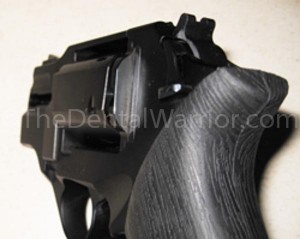 The trigger in double action is rated at about 8 – 10 lbs (depending on whose report you read), which is fairly heavy and a typical safety feature in a revolver designed for concealed carry.  I don’t have a trigger-pull gauge.  Nevertheless, I found it to be fairly smooth, and the wide trigger face spreads that weight out comfortably.

In single-action, the trigger pull is reported to be  2.5 – 5 lbs.  I found the single-action trigger release to be light and very crisp and perfect for precision shooting.  However, it does take a bit of effort to manually cock it for single-action. 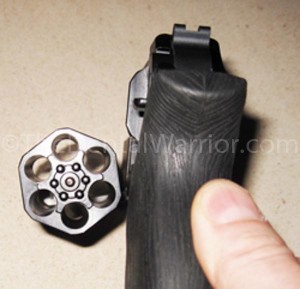 You may also have noticed that the cylinder of the Rhino is different in that it’s actually hexagonal.  The flat sides make for a flatter and more concealable profile.

No doubt, the Chiappa Rhino, which comes in 2, 4, 5, and 6-inch frame sizes, is not a conventional revolver.  It’s not for everyone.  But, it’s unusual appearance and reduced felt recoil and muzzle flip appealed to me.  And, having experienced the reported benefits of the lower bore axis has convinced me that the concept has real legs.  As more shooters experience it for themselves, word will spread.  I wouldn’t be surprised if we see other big-name manufacturers jump on this with their own versions.

A traditional concealable snubnose doesn’t get much range time, since they’re simply painful to fire more than enough for a baseline competence with the weapon.  An obvious advantage of the Rhino is that it’s concealable and powerful, yet it’s comfortable to shoot for extended periods at the range.  This can only translate to a higher level of competence and proficiency.  And, of course, it’s more fun!  🙂  More practice is a good thing with a weapon that is intended to save your life in the event of a lethal encounter.  We practice and hope to never have to use the skill.  And, I truly wish that none of us ever does.

Chiappa is not as well known as Smith & Wesson, Ruger, Colt, et al.  Time will tell whether the Chiappa Rhino is a reliable piece.  But, it is certainly innovative!

I will try to get around to making a video review, so check back on this post for updates.

UPDATE:  I have run some .357-Magnum through the Rhino since I first reported here.  While there is a noticeably louder report and more recoil, it is VERY tolerable.  Even with .357-Magnum in this snubbie, I could shoot it all day.  Not uncomfortable at all.  I don’t think we could say that about other snub-nose revolvers firing .357-Magnums.

Update #2:  I made a video comparing the recoil / muzzle-flip of the Rhino vs. a traditional revolver.  Please excuse the “teacup” grip.  At the time, I thought it would allow a better view of the gun and better illustrate the muzzle flip.