Posted on September 28, 2011 by The Dental Warrior

Last April I ranted… I mean blogged… about the 15% cut in fees by the state of Washington’s Delta Dental plan.  In it I said Washington was the beach head of this war.  I predicted that other states would follow suit.  And, I was right.  It was just announced that Idaho’s Delta is doing the same thing… cutting fees by 4 – 13%.  Perhaps it’s coincidence that it was a state bordering Washington.

Dentists DO have a choice.  But, they have largely been brainwashed just like patients to think that without so-called “dental insurance” that they wouldn’t or couldn’t get dental care.  Of course, reality and simple mathematics prove otherwise.  But, emotion is a fearsome opponent of logic (math).

The Elephant in the Room 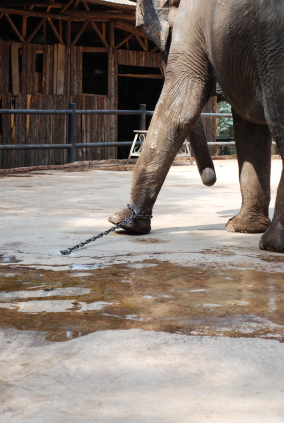 I see dentists to be like the circus elephant.  When the elephant is new, they use a giant chain to confine him.  There’s no way he can get away.  Eventually he stops trying.  At that point, the circus can use a small, lightweight chain (much more convenient) to restrict the elephant’s movements.  The elephant could EASILY break the chain, but he gave up trying a long time ago.  Emotionally, the elephant is convinced he cannot escape.  Emotionally, the elephant is defeated.  Logic (physics) would prove otherwise.  But, emotion is a very powerful force… even more powerful than science.  The elephant would be very surprised to find he could PHYSICALLY escape, if only he would MENTALLY clear that hurdle.

Yes… it’s against the law (anti-trust) for dentists to COLLUDE in setting fees or bargaining with insurance companies.  But, there’s no law against all the dentists acting INDIVIDUALLY.  And, until all the dentists develop a trace of testicular fortitude, this will continue to happen.  And, the quality of our care, along with the quality of our professional experience, will continue the downward spiral.  Until dentists decide to stand up and tell the inscos to go screw themselves, this will only get worse… and worse.

“If you choose not to decide, you still have made a choice. ” – Freewill by Rush

A long time ago, I decided I would not participate with “insurance” by way of contractual agreements.  And, before anyone argues that my geographic area or demographics are different or magically immune… I’ll just say it’s not true.  I live and practice in HMO-land down here.  Some will justify their position saying, “I have no choice.”  Wrong.  You do have a choice.  I made my choice, and I will gladly tell you it was NOT easy.  It still isn’t easy.  It’s HARD.   I have to get patients that WANT to come to my office, rather than have them funneled to me via a booklet of “participating providers.”  First, I’m not a “provider.”  I am a dentist… a DOCTOR of Dental Surgery (DDS).  It’s no accident the inscos have demeaned our status down to “providers.”  It is intentional, no doubt.

But, I do enjoy being the captain of my ship.  My autonomy and liberty have no price.  And, I certainly won’t give them up for a discount.  Yes… I would rather have an empty chair than a deeply discounted patient in the chair.  Some see that as “down time” or unprofitable.  I see it as opportunity to seek patients who DO care about quality.  It’s an opportunity to market myself to those who prefer to choose their dentist on merit rather than a list of “providers” willing to sign a contract with the devil.

They’ll leave you for the same reason they came.

I’ve always felt that patient who would come to me because I’m on a list… would LEAVE me for the same reason (if I leave the list).  And, that is the tenuous thread that holds insurance-based dentists hostage, just like the elephant.

It won’t be easy for dentists who have long practiced within the confines of insurance-oriented patients.  But, staying on isn’t working, either.  And, it will get worse.  Will you go down with the ship?  It IS sinking.

It started in Washington.  Next was Idaho.  Do you really think it will stop at the border of your state?  You can see the train coming.  Will you get out of the way?  Will you continue to lick the hands that feed you?  Or will you stand up and live on your own terms?  What do you stand for?  I can’t resist posting a quote I just love:

“I come in peace. I didn’t bring artillery. But I’m pleading with you, with tears in my eyes: If you fuck with me, I’ll kill you all.” – Marine General James Mattis speaking with Iraqi tribal leaders.

Maybe we should each (no collusion) have a “talk” with the Delta “tribal leaders.”  😀  Ooh-RAH!

12 Responses to Another Delta Dental State Bites the Dust!