Teach… your children well… about safety.

Posted on September 10, 2011 by The Dental Warrior

A local newspaper ran a story recently  about “accidental” injuries and deaths with guns.  Some of them involve children who were (obviously) not supposed to have access to the guns.  While seven times as many kids die from drowning, the gun stories get far more press.  Thirty-seven times as many die in car crashes.  All are equally tragic.  All are equally preventable.

There are no accidents.

Our culture treats education aimed at prevention differently depending on the causes of these unintentional deaths.  I don’t like using the word “accident,” as it implies no fault, no accountability, and no control.  In most cases, some level of negligence is involved.  Somebody IS at fault.  And, I believe some of the stories about “accidents” are suspect.   I understand that these incidents may be unintentional (and some not).  But, had some level of what should be common sense prevailed, these injuries and deaths could have been prevented. 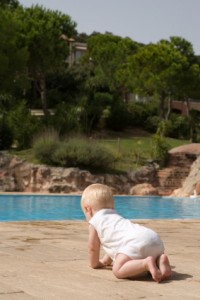 Most of us leave our car keys on the counter with no worries of our kids taking off in the car.  Our kids know that’s off limits.  We even have various poisonous substances laying about with no concerns over our kids consuming them.

In Florida, many of us put our kids in swimming lessons by their first or second birthdays.  We may not all have pools in our own backyards, but there is water everywhere in Florida.  We don’t have a pool at our house.  But, my kids have friends who live in homes with pools.  Furthermore, canals, ponds, and lakes dot the Florida landscape.  Basic water safety can save lives.

Like it or not, guns are everywhere in the U.S.  Our country was founded by virtue of private citizens bearing arms.  Armed self-defense is how we ran an oppressive foreign government out of our new country.  The 2nd Amendment exists to prevent our own government from infringing upon our natural right to armed self-defense.  I certainly don’t want to instigate a debate with those that disagree with the Bill of Rights.  But, I think any sentient American should recognize that guns could not (and will not) ever be banned from existence in this country.

Certainly, it’s your personal decision whether or not to have guns in your home.  But, chances are you aren’t planning on indefinitely confining your children to your safe haven.

But, I don’t have any guns in my home.

So, if water, strangers, poisons, sharp objects, and guns are ubiquitous, why are we preferential (or biased) in the education of our children?  It seems gun safety is ignored by many parents as an essential lesson to be taught to their children.  They’ll argue that since they don’t have guns in their homes, they don’t have to worry about that.  I believe that is ignoring reality (and perhaps some wishful thinking or even delusion).  Wishing it away won’t protect your children.  Ignoring it could end in tragedy.  Educate yourself first, if necessary.  Then pass on the knowledge that may save your child’s life. 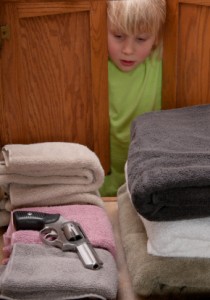 Even if you don’t have guns in your home, your kids’ friends may have guns in their homes.  Your kids may even encounter a gun ditched into the bushes at a park by a criminal.  You can’t control the environment for your kids 100% of the time.  Why wouldn’t you teach them some very easy and basic rules to follow should they encounter a gun?  You may not have a dog in your house, but you’ve probably taught your kids to not pet a strange dog if they come across one, right?

And, if you do have guns in your home, they should be locked in a safe when they are not under your direct control.  There are many safes available that still allow quick access to authorized adults.

There is an excellent video produced by the NRA called “Learn Gun Safety with Eddie The Eagle.”  From that video, the four easy rules for children are:

If you see a gun:
STOP!
Don’t Touch.
Leave the Area.
Tell an Adult.

What was unusual about the particular news story (referenced at the opening of this blog post) was that instead of interviewing a politically motivated non-expert with an agenda (against our 2nd Amendment rights), the journalist actually enlisted a REAL EXPERT about guns and gun safety (click here to see the video).  I happen to “know” this expert via an online forum (FloridaConcealedCarry.com).  I thought his explanation was excellent.

Will Farrugia (the man in the news video) made a VERY important point about guns that use a detachable magazine.  Just because the magazine is removed from the gun, it doesn’t mean the gun is not loaded.  There may still be a round in the chamber.  Either way, ALL guns should be treated as if they are loaded… ALWAYS.  (See rule #1 of Cooper’s Rules below.)  I also demonstrate how removing a magazine does NOT make a gun safe in my own video at the 3:20 point.  (Link in next paragraph)  Again, it shouldn’t matter whether a gun is loaded or not.  Treat it like it is.  Don’t point it at anything or anyone.  And, keep your finger off the trigger!

A few months ago, I blogged about gun safety and then I made my own gun safety video.  Please check them out by clicking on the links.  But, just in case you don’t, here are Col. Cooper’s Four Rules of Gun Safety.  Everyone… even non-gun-owners should know these rules (especially the first three):

Be safe, and keep your children safe by educating them.  It DOES work.  But, you have to keep at it while enduring some rolling of the eyes (from your kids).  Drill it into them.  Rinse and repeat.  You may have noticed that I have done the same here.  🙂  Feel free to roll your eyes! 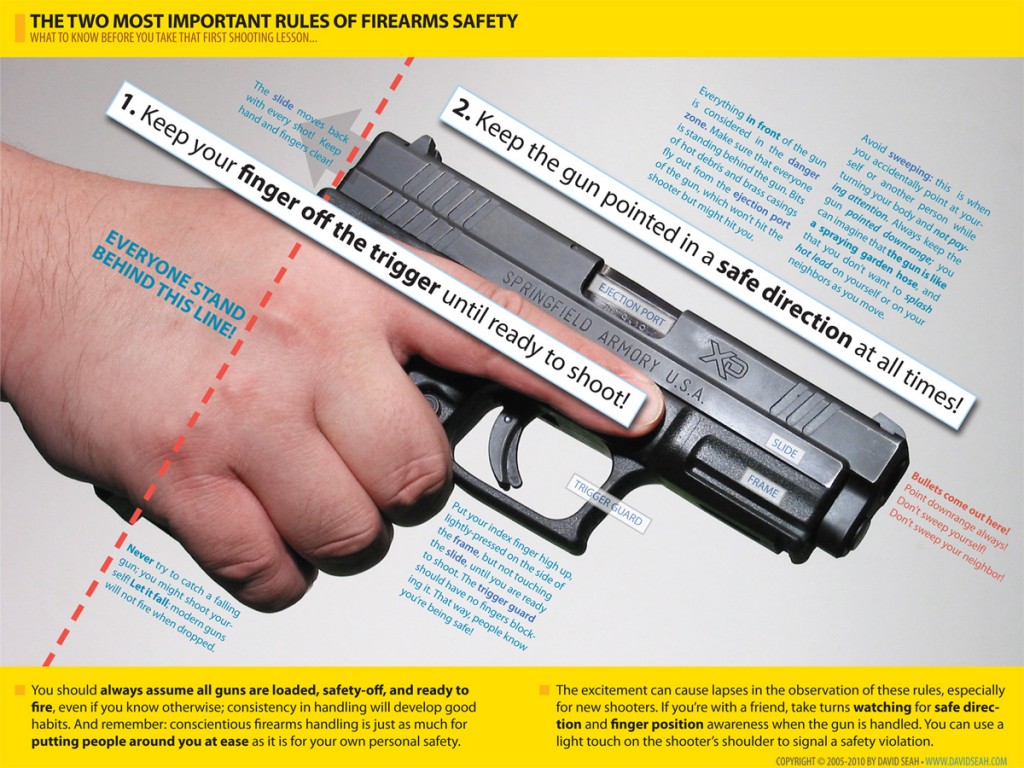 Copyright protected by Digiprove © 2013 The Dental Warrior®
This entry was posted in Editorial, Personal Security & Safety. Bookmark the permalink.

3 Responses to Teach… your children well… about safety.