I’m watching TV after lighting off some fireworks with my kids.  My neighbors all around put on a heck of a show!  Professional grade stuff.  Looked like Baghdad at the start of Desert Storm!  🙂  Tonight there are two “specials,” one on NBC, the other on CBS.  The shows are listed as follows: 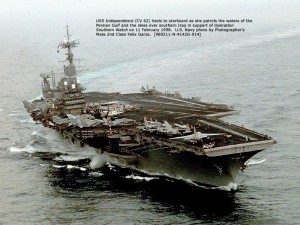 My ship! (in the Persian Gulf)

Not “4th of July.” Not “Independence Day.” They’ve neutered the NAME of the holiday.  I don’t think it’s an accident or meaningless coincidence.  And, as a veteran, I find it particularly objectionable.  And perhaps not coincidentally, I served on the aircraft carrier USS Independence.  Hmmm….  🙂

Not once during the show on CBS (which I watched in its entirety) did they mention the birth of our nation.   Not once did they even say, “Happy birthday America.”  Nope… nothing about the significance of the holiday.

Today we celebrate the declaration of our independence from a tyrannical and oppressive (British) government.  I believe that spirit still lives.  But, it seems some here would like to quash it, in the name of political-correctness… even if in subtle ways (at first).

“That to secure these rights, Governments are instituted among Men, deriving their just powers from the consent of the governed, — That whenever any Form of Government becomes destructive of these ends, it is the Right of the People to alter or to abolish it, and to institute new Government, laying its foundation on such principles and organizing its powers in such form, as to them shall seem most likely to effect their Safety and Happiness.” –  Declaration of Independence

Copyright protected by Digiprove © 2013 The Dental Warrior®
This entry was posted in Editorial, What Happened Today. Bookmark the permalink.

2 Responses to Proud to be Independent on Independence Day!