I just read a sad letter to the editor in my recent Guns & Ammo magazine.  It was from a gentleman living in the UK.  It was titled, “Count Your Blessings.”

I will borrow most of his letter and paste it here:

I thought your readers might be interested in hearing the hoops we have to jump through in the UK (to purchase a rifle).  Before I can purchase a rifle, I need to get a firearms certificate (FAC).  This lists not only the rifles I own (or might want to buy), but also where I can shoot each one of them and at what (down to the SPECIES of quarry).

My FAC also details how much ammunition I can buy at any time and how much I can hold in total.  If I want to shoot at targets, I need to have been a member of a government-approved shooting club for at least six months before applying to the police for an FAC and will only then be able to shoot at my home club or other government-approved clubs / ranges.

If I want to hunt, I have to prove I have permission to shoot over land suitable for the caliber of rifle I am applying for and the species of quarry I want to hunt.

The local police, who administer the system, will check whether the land is suitable for the purpose / caliber requested.  When I have all that in place, a Firearms Enquiry Officer will visit me at my home to make sure I am not a danger to society and that I have a suitable place to store the firearms.  This is following checks on police computers and taking up of two references.

If I want to buy a different type of rifle (in a different caliber, for example), I need to apply for a variation, which requires another visit from the FEO.

Of course, in the UK, I have to have a different kind of license to own shotguns.  And, we are only allowed to own muzzle-loading pistols.

Wow.  I have to admire the perseverance of those who choose to jump through those crazy hoops!  That famous “British stiff upper lip” still lives, eh? 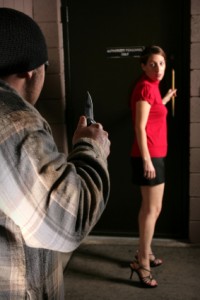 A distinction the letter-writer didn’t make was that this is what the LAW-ABIDING subjects (they aren’t citizens in the UK) have to go through.  However, if you’re a CRIMINAL in the UK, all you have to do is just go get yourself a gun and do whatever you please. No hoops.  Just do it.

As a criminal in the UK, you can also be virtually certain that your intended victims have no way of defending themselves.  Perfect!  A (helpless and willfully hapless) target-rich environment!  And, even better… if the victims DO take some sort of defensive action, they can be held civilly and criminally liable.   Yep… if you are mugged, raped, robbed, or ganged-up on by thugs, you cannot legally defend yourself.  And, if you do defend yourself and hurt the bad guy, YOU become the “bad guy” and go to jail.  To use the British vernacular:  Bugger! 🙁

In the UK, even butter knives are regulated.  No kidding.  Look at the legal disclaimer for a butter knife on Amazon.co.uk:

Do you have a license for that butter knife??  In case you can’t read the disclaimer, it says:  “Please note that this knife is not for sale to people under the age of 18.  By placing an order for this product, you declare that you are 18 years of age or older.  This item must be used responsibly and appropriately.”

None of my pocket knives would be legal in the UK.  Over there, the blade no more than 3 inches, and folding knife cannot have a mechanism that locks it in the open position.  Plus, you have to have “good reason” to carry a knife there.  “Good reason” is subjective and to be determined by a court, after you’re charged.  Lovely.

I can’t even imagine living in a place where the criminals have more freedom that law-abiding citizens.   Well… we do have some pockets of such disparities here in the U.S. (Illinois, New Jersey, California, Massachusetts).

We the People of the United States, in order to form a more perfect Union… 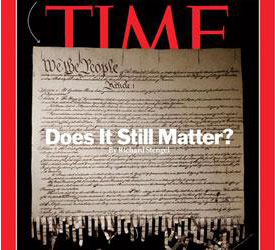 Our Constitution was written by some brilliant men.   Yet, on the current cover of Time Magazine (liberal rag that it is) is an image of the Constitution being SHREDDED with a title, “Does It Still Matter?” Really?  This is a REAL question??  I suspect the morons at Time Magazine would be the first to squeal if there was an infringement upon the First Amendment (freedom of the press).  But, I supposed they don’t care so much about the others.  Without the 2nd Amendment, there would be no guarantee of the other Amendments.

Count your blessings, Dental Warriors.  And, use whatever means necessary to protect your Rights.  First and foremost, that means using your right to VOTE.  Furthermore, teach your children accountability and self-reliance.  I fear those personality traits are being supplanted by the entitlement mentality pervading our culture.  Yet, I am confident it is those American traits that have made this country what it is and what it will be.  Or you can choose to become “subjects.”

“They who can give up essential liberty to obtain a little temporary safety, deserve neither liberty nor safety.” – Benjamin Franklin