Rapture Is Over… Stand By for the Zombie Apocalypse! 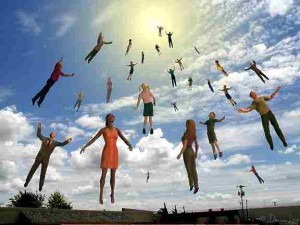 Last night at around 6 pm, I experienced “Rapturus Interuptus.”  For a minute, I felt myself levitating, but then realized that it was just Criss Angel playing a joke on me. 😉  So, I guess I’ll have to go to work tomorrow.

If nothing else, the predictions of the “Rapture” provided a bevy of comedy opportunities.  Almost everyone got in on the act on Facebook and every online forum I frequent.  We all got to flex our comedic muscle!  🙂

On many online forums, disaster preparedness is at least an occasional topic.  And, the “Zombie Apocalypse” is a oft-used metaphor, as is “SHTF” (shit hits the fan), or even TEOTWAWKI (the end of the world as we know it). 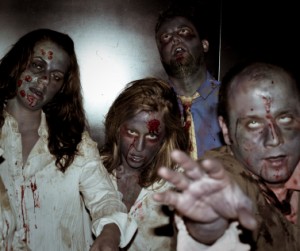 Any can be used to describe a broad spectrum of possible events ranging from the more likely local weather disaster or “act of nature” to a complete break down of government and civil unrest.

Certainly, Hurricane Katrina left New Orleans in utter physical chaos.  But, it also precipitated quite a bit of civil unrest and general lawlessness.  Even police officers abandoned their posts / duties.  There are many, many stories and incidents of laws being violated along with civil and Constitutional rights being ignored or illegally suspended.  But, there’s plenty written about that online, so I won’t expound any further. 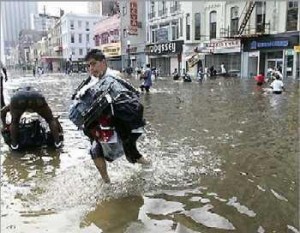 The point of this blog post is to provoke the introspective question, “Would I be prepared?” or “What would I do?”  Local disasters bring out the the best in some people, and the worst in others.  And, it’s those in the latter category that should concern you.  Unfortunately, the cultural mores exhibited after Katrina were nothing like the stoic acceptance and order that followed the recent earthquake and tsunami in Japan.  There was a tremendous contrast between the two.  And, to those familiar with Japanese culture, it was no surprise to see no looting, rioting, or protests there. 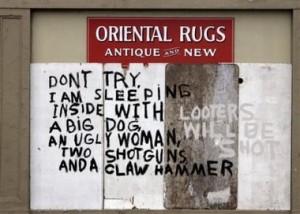 Of course, there are various levels of preparation in which one can engage.  (My English teacher would be proud that I didn’t end that sentence in a preposition!)  How much you prepare will depend on a variety of factors including but not limited to:

I’m not writing to advocate any particular level of preparedness.  That’s an individual decision, and I admit to being a rank amateur on this topic.  However, whereas I used to dismiss the notion of the SHTF on a national level, I’m not so sure today.  Certainly Katrina was a demonstration of what can happen on a local level.  Many people were left to defend themselves and their belongings.  Law enforcement could not possibly be everywhere or help everyone (or even ANYone).  I live in Florida, so catastrophic weather events are a possibility.

More recently, we’ve witnessed civil unrest or even anarchy in several countries around the world, notably in the Middle East.  Now we’re seeing it in Europe, including the U.K. and Greece.  The older and more politically and culturally observant I’ve become, the more I’ve realized that the United States is not necessarily immune to such events.  I do think it’s unlikely on a national level… but, not impossible.  States across the country are largely bankrupt.  People are frustrated.  Some even on the edge of desperation. 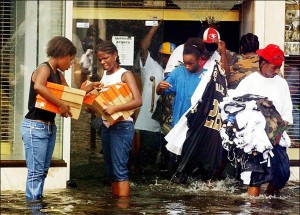 In a natural disaster, food and utilities can be interrupted for an indeterminate length of time.  Most supermarkets have about two days worth of food.  How long can you go without electricity?  How much food do you have on hand?  Water?  Toilet paper?  And, even ammunition?  In my area, after Hurricane Wilma a few years ago, some areas were without electricity for 2 weeks.  Many roads were impassable.  Traffic lights were missing (not without power… actually MISSING… GONE) from major intersections with 4+ lanes in each direction.  Gasoline was not available.  Supermarket shelves were bare.

Again, I’m not here to suggest you pursue any particular course of action other than possibly educating yourself… if you’re interested.  But, it’s notable that some government agencies have official web pages with advice on how you should prepare for disasters.  Even the CDC has an article about the Zombie Apocalypse.  And, the article uses that very metaphor!  The clickable button on the left is from the CDC website.  No kidding!  Go ahead… click on it!  See for yourself.  🙂

So, sure… it’s a bit humorous.  Just the phrase “Zombie Apocalypse” makes me chuckle.  But, the message about being prepared for SHTF scenarios is one worth heeding.  What would you do if angry and hungry strangers started banging on your door?  Breaking windows?  Don’t think it can happen here?  Ask the folks in Louisiana.  Maybe it won’t happen.  Maybe the zombies won’t come knocking on your door.  But, there may be enough civil unrest to prevent you from going out and buying food, water, or other necessities.  Do your own research.  Decide for yourself how you would handle disaster situations.

PS… The proper protocol for killing zombies is to destroy their brains.  This can be accomplished in one of the following ways:

4 Responses to Rapture Is Over… Stand By for the Zombie Apocalypse!